A particular focus of Design Studio 1.5 development was to improve performance.

This document describes many aspects of performance improvements, which are divided into:

Before Design Studio 1.5 browser caches were tied to a specific server node. Thus, in system landscapes with multiple nodes the browser cache had to be built up several times – one time for each node. With Design Studio 1.5 the caching strategy has been improved to support a single cache, which is shared among several server nodes. This results in an improved startup time of the application, because the browser cache filled by the first node is reused when other nodes are accessed.

Both improvements result in an improved startup time of the application, especially in high-latency scenarios like WAN, because of the reduced number of HTTP requests.

Improved Startup Time of Application When Executed on Server

With Design Studio 1.5 the application developer can define groups of data sources (“processing groups”). Each of these groups can be executed in parallel. Each group is associated with a session. Note that variables of separate sessions cannot be merged. If the application needs both parallel query execution and variable merging then there are new Design Studio script methods that can emulate variable merging behavior.

The most significant performance improvement of parallel query execution is during application startup. In addition, the performance of the application is improved whenever the result sets of data sources are retrieved, for example during rendering, after applying filters, after changing the drill-down, and so on.

Before Design Studio 1.5 variables of data sources are merged in a “variable container“.

This has the following advantages:

However, these advantages come at a price in performance:

When data is retrieved from an invalidated data source, for example during rendering or during a Design Studio script method call, then the data needs to be reloaded from the backend. This obviously reduces the performance of the application – the more the larger the number of data sources with variables.

When setting several variable values with „setVariableValue“ or „setVariableValueExt“ Design Studio script methods, write these commands in one direct sequence, one after the other, without any other Design Studio script methods in between. This sequence is folded into a single backend call to submit variable values instead of multiple ones, improving application performance.

During the “On Startup” script the variable values have been already initialized using their default values or with values entered in the Prompts dialog. Setting a new variable value at that time will invalidate the associated data source, resulting in reloading the data. Setting the values in the “On Variable Initialization” script, which is executed before the “On Startup” script, avoids this issue.

Background Processing Is Not For Free

Getting It Even Faster

By default the Crosstab component scrolls only in units of entire cells (like in Microsoft Excel). Additionally, to achieve best performance, only the data for the displayed cells are sent to the browser. However, you can activate “pixel-based scrolling” at a Crosstab component, mainly aimed at touch devices, which offers a more fine grained, pixel-wise scrolling. To achieve this kind of scrolling, however, it is necessary to send the data of all available cells to the browser. Obviously this will work for a limited number of cells only.

With the growing number of cells this feature decreases performance in several ways:

In case of performance problems, it is recommended to check the following guidelines:

Improvements in the Profiling Dialog

With Design Studio 1.5 the measurement accuracy has been increased – on the Windows platform, for example, from 16 milliseconds to 1 millisecond.

With Design Studio 1.5 the tab “General Information” was added to the Profiling dialog. It provides the following information: 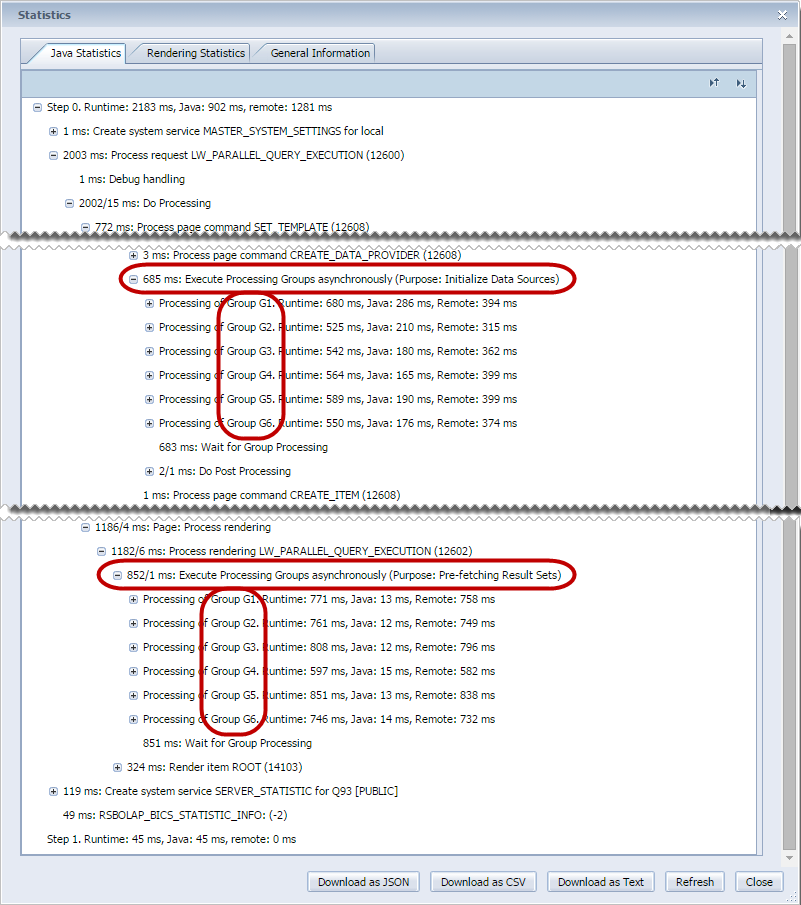 The separation into processing groups is also reflected in the downloaded content of the Profiling dialog.

As you have seen from this long list of topics this Design Studio release truly was about performance.

As soon as Design Studio hits the market (end of Q2/2015), you will have lots of new possibilities for improved application performance.

Have fun with Design Studio 1.5!