At the tail end of March 2015, SAP Education Australia & New Zealand (ANZ) completed a series of breakfast events. I presented alongside Anette Karlsson and Jesse Bernal.  It was great to see so many familiar faces in the audience as well as have the chance to meet new ones.  Many different types of people attended each of the events, from directors to analysts and students to project managers from a variety of verticals.  It was the largest attendance of SAP Education events to date and the questions and participation was excellent.

Under normal circumstance it may be a challenge to present to such a broad range of people, but one of our topic threads was about how to target inefficiencies in business processes and re-mediate those inefficiencies with well communicated best practice.  My name is Matthew Sleaford and, working for SAP as an Education Account Executive based out of Sydney, this is my focus when working with businesses and it is a topic that crosses roles and verticals.

We are all end users.  We all use systems to achieve our daily working goals, so consider your own personal experiences as you read on. End users have a personal way of
working through business process, unique to them.  A concoction of various experiences passed down by those before them and those around them. You might describe it as a coping mechanism, a means to getting the job done, perhaps even the path of least resistance.  “It’s the way it’s always been done”.

It’s quite rare for a business to define best practice across their whole IT landscape because the cost in time and money is prohibitive. If processes are documented, it’s typically by the project team during implementation, but even then, this if often foregone as time and budget pressures surmount and the unmovable go live date looms ever closer.

If the project team does manage to document process, once they dissipate, it is highly unlikely that any process documentation is ever touched or updated again and if you consider that things change so often, particularly in the teething months after go live, and that each change would need reflecting in the documentation, end users will end up with dated process documentation very quickly, if they ever use the documentation at all.  Just take a look into your own organisation.

Therefore it’s not that end users are not doing anything wrong, per se, but perhaps there is a better way of doing something than that which they know, something undocumented, perhaps even undiscovered.

Take the noise out of the equation:

Truly understanding end users use and experience of systems is a daunting challenge which is typically done by a series of interviews and workshops conducted against a sub set of end users.  This has three problems to my mind 1) not every one voice is heard, 3) it’s time consuming and 2) it is subject to perception, that is that even if two people were to have exactly the same user experiences, their perceptions may be different.

SAP Education gives businesses the ability to address these three areas by monitoring end users in SAP systems and gathering information such as the top most error prone transactions or modules, which users would benefit the most from training, which systems or processes are the slowest.  Take a look at the screen shot to get an idea of some of the things we enable you to see. 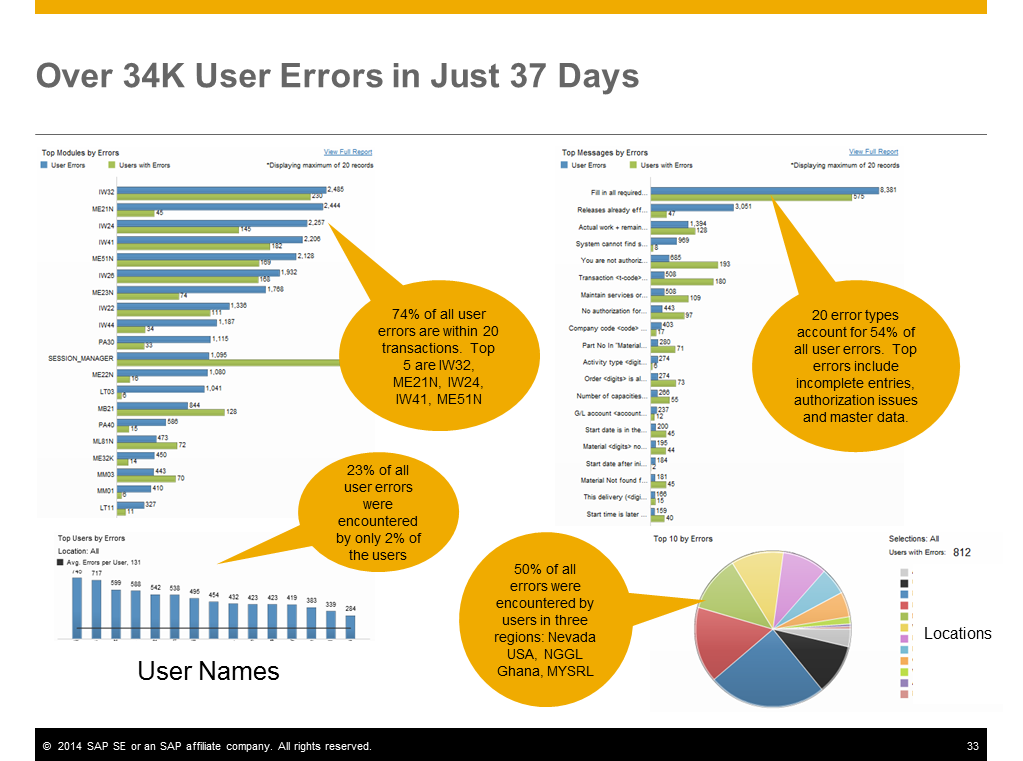 The important thing to note here is that this information is continually drawn from every user and is data driven which enables the business and IT to come together and focus in on areas that need the most attention by making data informed decisions.  Ever been involved in a business vs. IT conversation about who’s fault or responsibility something is?  That needn’t happen ever again.

So you’ve found the end users that need support or the processes that are inefficient and should be retired.  What now?

You’ll need to determine what the best practice is.  This often involves calling in an expert or a contractor who knows ‘the system’ best.  Although, it’s highly likely that you already have someone inside your very walls who already knows the process inside out, somebody already on your payroll, somebody who knows your business, somebody it won’t cost you to leverage.

If the monitored material enables you to see the inefficiencies, it necessarily follows that you can see the efficiencies.  The delta is your gain, which can be measured once you’ve rolled out your communications of new, best practice.

Take for example one business who identified a single user capable of doing a Customer Service Order Entry in four minutes where other users of the ECC instance were taking between ten 10 fifteen minutes to do the same thing.  Capturing the identified best practice from that user and communicating that process to the other users resulted in productivity gains of between 60% and 73%.  Productivity gains as large as 75% have been achieved.

Of course, none of this will matter if you don’t communicate findings to the end users who need to know the improved process to realise the benefits.  The good news is you don’t need to bring together a project team to document anything.  You simply leverage that subject matter expert who knows the most effective process, getting them to record that transaction in a single source, multiple output engine that will output test documentation should you want to go through a user acceptance test stage and a training document, cheat sheet, job aid as well as a plethora of others.

This can then be presented to other end users from within the application they are being supported on, contextually relative, so they don’t even need to leave their application, let alone their desks to go to a ‘training session’ to realise the benefits.

You can passively monitor end users in SAP systems now, so you can see in the dashboards presented in Knoa if the well communicated changes you’ve made have been adopted and if they have been you can quantify the productivity gains you’ve achieved and if they’re not, you have the data to help you make an informed decision, not one based on speculation or perception.

To make decisions based on speculation or perception doesn’t guarantee precious budget and resources being spent on high value areas which will yield high value results.

The interesting thing about this is how simple it is.  Monitoring end users is passive and constant which means you can take a snapshot at any point in time and benchmark that against your historic state.  Capturing the best practice process is done by simply leveraging your subject matter expert as identified by the monitoring process and pushing the information to end users for benefit realisation can be done contextually, in the application which in turn leads to increased knowledge retention and adoption.

I welcome any feedback … and were you there at the Breakfast?  What were your thoughts?

Sounds great. I do think the whole team benefits when everyone is at the same speed.