I Request SCN to allow me to dedicate this document for my Good Friend Vijay Varadharajan.

This document helps the forecaster’s / Supply chain analyst to follow the precautions while manipulating the data with the Manual Adjustment of Demand History screen in SAP so that inconsistencies within the system could be prevented.

When you’re updating the histories in any of the below highlighted Key Figures (Any changeable Key Figures), Please adhere to the steps explained below. 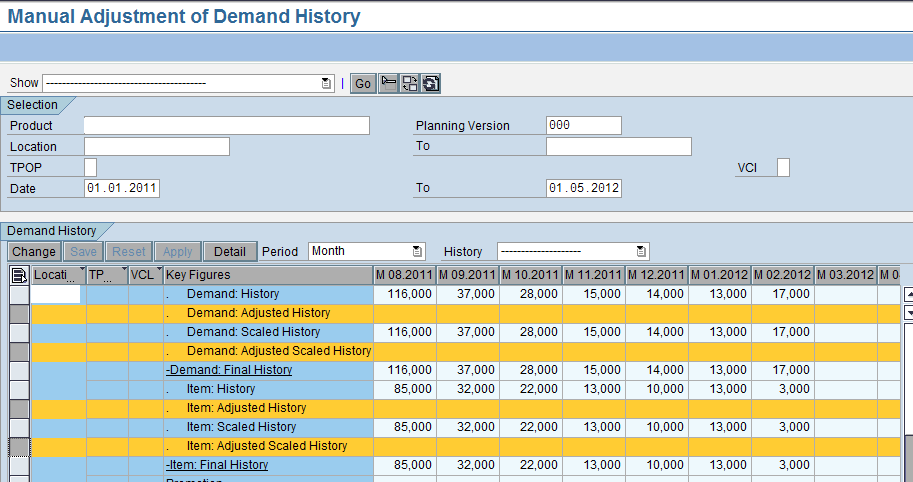 CAUTION – Please leave the transaction and come back again after a minute if you want to edit the historical values for the same Part, same Location and same time bucket combination.

In our example, the user tried to edit the history from 25 (refer above screen shot) to some other value for the same Part, same Location and same time bucket.

System warns the user as the data for particular Location-Product is been locked ( i.e Daemon still in progress of updating the data from DEMCRT to the Multiproviders), since the user just edited and saved the value for the same combination within a minute ago for which the system trying to update the new value across the system.

When system shows the above warning message, it strongly suggests you to hold the changes for the particular part and it wants you to try after sometime (May be after 1 min), it’s advisable to leave the transaction and come back again for the next change after a minute.

Here’s an example where the user violated the STEP 2 which leads to inconsistencies in the system for a particular part’s Historical values.

In the Time Bucket M.06.2011, the original history was 143. User changed the history to 15 first time and then tried to change the value again. Now the system warns the user with below warning message as the previous change was not yet updated into the system completely.

User violated the system warning and changed the history to 10 in Time Bucket M.06.2011 within a minute and without leaving the transaction.

However, Doing so the system will show you the message as the data got saved successfully as given in the below screen shot.

As a result of the above violation, Negative values in the demand Histories created in the system.

Here is how the system will update the Histories finally.

As a result, when you try to view the Part’s forecasting information in Forecast UI for the Product-location combination system will throw out an error saying “Inconsistent Historical Data” as given below.

CAUSE – As for the reason!! It is a consequence of the deamon updating 9ADEMCRT records to 9ADEMMUL with a frequency of one minute. The locprod is locked as long as data is saved to 9ADEMCRT. (Technically it is not possible to lock it further.) And then if you change demand during the intermediate time between deamon runs, demand is calculated how much to be adjusted.

Solution: Running Stocking Realignment may resolve this kind of inconsistencies

NOTE – There could have been NEW notes released by SAP to overcome this issue, But am not sure.

Check these Notes as well.