With Lumira Desktop 1.23, SAP has integrated a new, lightweight, in-memory data engine that is native to 64-bit environments.

In Lumira 1.27, planned for June 2015, SAP plans to begin making changes that leverage and depend on this new data engine. These changes are groundwork for important innovations in later releases, but as a result, SAP will no longer deliver 32-bit versions of Lumira Desktop with new features after Lumira 1.25.

For customers who wish to continue using Lumira Desktop on 32-bit machines, options will include:

For more information about Lumira, please refer to the Help Portal, or in case of any questions, you are welcome to contact us directly at support.lumira@sap.com.

just a quick check about the dates mentioned above - should that read "critical fixes until Sept 2015" ?

Hi Henry, thank you for checking, but September 2016 is correct.

Ah ok.  thanks for confirming - I understand now that you've decided to align this date with the "end of support date" for Lumira 1.x as stated on the SMP

Quick update: since Lumira 1.26 is not planned for general release, I have updated this blog to specify Lumira 1.27 as the first release of Lumira Desktop that will be 64-bit only.

I am not able download the Lumira now in Saudi Arabia. I down loaded the 1.25 trial version and was waiting to come the BW direct access support. removed 1.2 and was trying to down load 1.27. But the option is not available now.

FYI - the new BW connector, is an Extension that needs to be managed (like the Universe Query Panel) 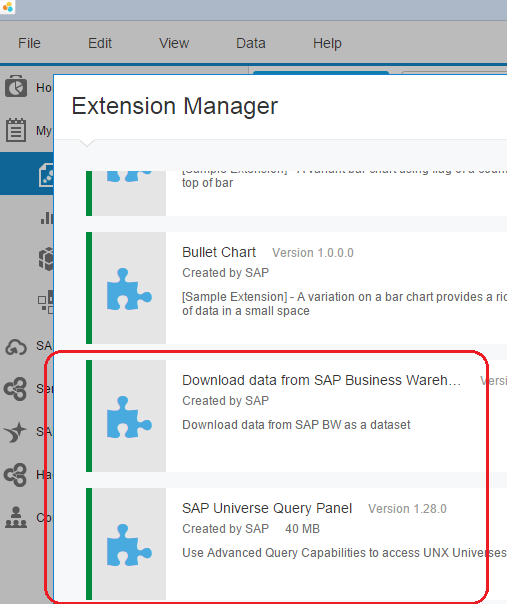 Yes, I suspect there would be aspects the Lumira desktop experience (the home page, the extensions marketplace) that may be currently blocked by Saudi

As I understand it, all WWW traffic into Saudi is filtered through a state-run restricted proxy, so this is broader issue than SAP as vendor.

Perhaps you could VPN out of the country to grab it ?