This in the first of a series of three blogs that take a look at the significant transformation that the telco industry is experiencing. This initial blog provides insights into this transformation, with follow-on blogs on how CSPs are changing their business models and the role that customers play in all of this.

Search on the phrase “the world is rapidly changing” and you’ll get nearly 42 million hits on Google in .74 seconds. 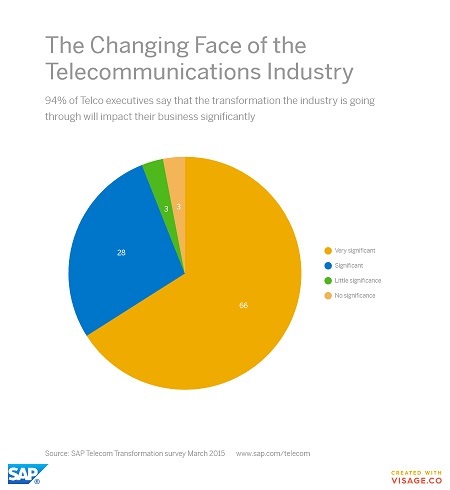 Obviously, the concept of a changing world is not a new one, but it is one that is certainly shaking up the telecommunication industry and prolifically affecting communication service providers (CSPs) around the globe.

The truth is there is hardly anyone in the telco industry that is not affected. In fact, SAP surveyed executives at the Mobile World of Congress last month in Barcelona and what they told us was no surprise. Nearly all of them (94%) believe that the changes in this industry are impacting them significantly – and most believe the impact is pretty considerable.

The statistics are staggering

CSPs are the backbone of the telco industry – and they are attempting to effectively manage exponentially growing numbers of connected people and devices and huge volumes of data. Take a look at some of the numbers, which collectively are a bit staggering:

So what does this all mean to CSPs?

At MWC, we also asked the people we talked with to share what they think the biggest challenges are, given their current business models. The one most frequently cited was the threat posed by the over-the-top (OTT) content players, like Google, WhatsApp, and Facebook. Companies like these are well aware of the immense opportunities behind the statistics mentioned above and are positioning themselves as the providers of value added services to customers, a spot that telcos must own if they want to move up the stack and retain ownership of the customer relationship.

And right behind the OTT challenge is the task of dealing with new technology trends. Given the explosion of data, this is not surprising. After all, CSPs are the ones delivering it around the globe and they must find improved ways to keep it moving efficiently as the volume grows at a rampant pace.

At the same time, CSPs also looking at technology as a means to harness the power of the massive amounts of data being generated. They want to not only do this to create new revenues streams for themselves, but also better services for their customers.

The opportunities are here and now

Analysts say that the revenue opportunities from all this are enormous – an IDC forecast says that the worldwide telco industry IoT revenue alone could reach $164 billion by 2018. And STL Partners predict that by 2020, over 30% of telco revenues will come from entirely new digital services, with digital and non-human services growing to $351 billion.

So how are telcos adapting? In the next blogs in this series, we’ll share some insights how the most effective CSPs are changing their business models – and we’ll also look at the role of customers in this transformative process.

To understand more about the telco transformation, take a look at my video discussing these changes and more.  Or follow me at @rickcostanzo on Twitter to join the discussion.