It gives me a privilege to share this concept, which was routed by mentor and friend who’s mightier push back today couldn’t have let me in working this scenario and thereby sharing with you might have delayed ages .

Thanks to my friend and mentor in this concern. Before I began further, I humbly request the moderators, mentors, excerpts and guru’s to add and encourage my post in this regard. Also I strongly believe in learning and thereby ushering oneself rather focused on credibility, because more than credibility self-satisfaction and thereby open-end challenges are always waiting for enthusiasts to work on no matter what level they might achieve.

Thanks a lot in advance…..

Generally, by practice most of us know that in a fiscal year variant, we configure the day count of a period in every month by end date of that month, but in the above case it’s little tricky, but once found it’s as good as a novice game.

This is the V3 variant (April-March) Fiscal Year. 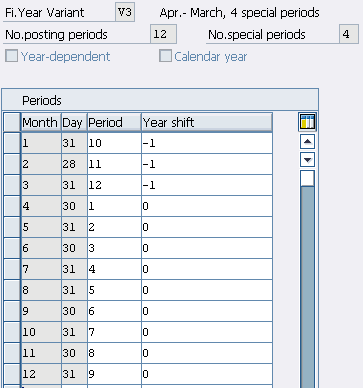 (1) Go to Transaction Code OB29 click on new entries or press (F5) and enter the two charactered alpha-numeric as desired (shown below) and save it to save the newly created Fiscal Year Variant.

(3) Enter the Months, Day, Period, Year Shift as shown below. [it’s noticed that in the below screen shot, that we were able to enter the periods for 15th of every month, excluding december]

Explanation of the approach….. 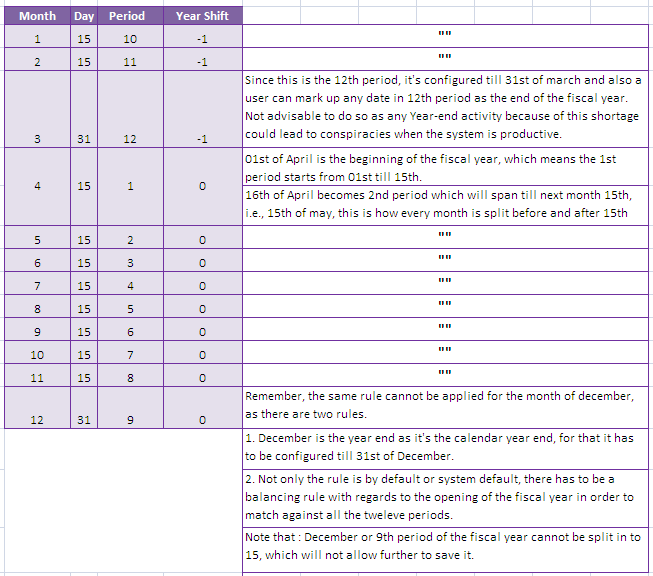 Once the Periods are been entered as shown above, click on save button or press control+S to save it.

Similarly Posting for the next month, this is how it goes on……

Hope this helps aspirants, newbies and consultants to understand how the periods can be mapped as per the client’s requirement to not only get the desired output further resolve such requirements.

It’s not only the case of 15, but any given date of a particular month, Also to make a note to all of you before I conclude this document, here it goes, when a particular period wants to be split till 15 and rest of the periods are in tact(no change), PFA…. screenshot for your reference.

I once again, thank my mentor and my friend, whose mightier push and continuous follow-up would not have really got me a such wonderful achievement, which might feel unseemingly impossible without trying.

Thanks a lot dear members and moderators me being the part of such a wonderful community and L”earning ” space too. Will see you with another recipe requirement  like this.

Have great time all.

Thanks a lot for your valuable compliment, In fact it's my friend who deserves the full credit as for their constant push back helped me in understanding and applying as a result I have not only checked it how it works, but i was able to share the same outcome as well, which might aid others in learning as well as sharing.

How can I maintain user wise Period Control i.e. I want to allow a single user to post previous period but not all. Please help me.