Don’t Get Beaten; Insights from a Legendary Coach

On a recent transatlantic flight, I watched the movie Forever Strong

which was “inspired by” incidents surrounding the Highland Rugby team in Salt Lake City, Utah. While the movie gets mixed reviews, I was intrigued enough by the story of Larry Gelwix, Highland’s head coach, that I decided to do a bit of research into his story.

Gelwix coached the Highland Rugby team for 35 years, from its founding in 1976 until his retirement in 2011. During his tenure, Highland had an amazing 418 wins with only 10 losses – winning 20 of the 27 national rugby championships held. True to the movie, Gelwix was known to be a demanding coach and required the players to sign a non-negotiable honor code that contained behavior standards, including avoiding alcohol, tobacco and drugs. It’s been said he summarized this philosophy with the following quote:

Gelwix characterized his secrets to success through five principles:

The last principle warrants further explanation. Gelwix advocated a kind of mindfulness for his players. Rather than worrying about mistakes they made during the last play or thinking about the next one, players are asked to be fully present in the moment and constantly decide what’s important to them.

Gelwix believed winning is determined by whether the players are focused on their own game or on their opponent’s game. If they start thinking about the other team, they lose focus and start playing to the other team’s strengths.  In other words, they lose rather than get beaten. In his words,

“There is a difference between losing and being beaten.  Being beaten means they are better than you.  They are faster, stronger, and more talented.”

Ask yourself, what’s important now and you will W.I.N.

This blog was originally posted on Manage by Walking Around on April 4, 2015. 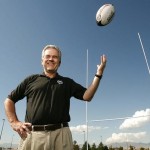