With SAP NetWeaver Application Server ABAP 7.40 SP8 it is possible to activate an encrypted and authenticated communication between the SAP Netweaver AS ABAP server components. This security measure is very easy to configure and allows to replace ACLs that have been used so far to secure the communication between server components.  (For the ACL configuration see for example the SAP Help Doku . This will not be explained in this blog.)

The new option allows to encrypt and authenticate the traffic between the system components with SSL.

During the first system restart after the activation of the secure server communication, the SAP Start Service sets up a certificate infrastructure (a system internal PKI). All instances of the SAP NetWeaver AS for ABAP server are integrated into the PKI and receive an instance specific certificate with private key that they can use to authenticate and to encrypt their system internal communication with other system instances.

After the setup of the PKI, all communication between system instances uses SSL for encryption and authentication. 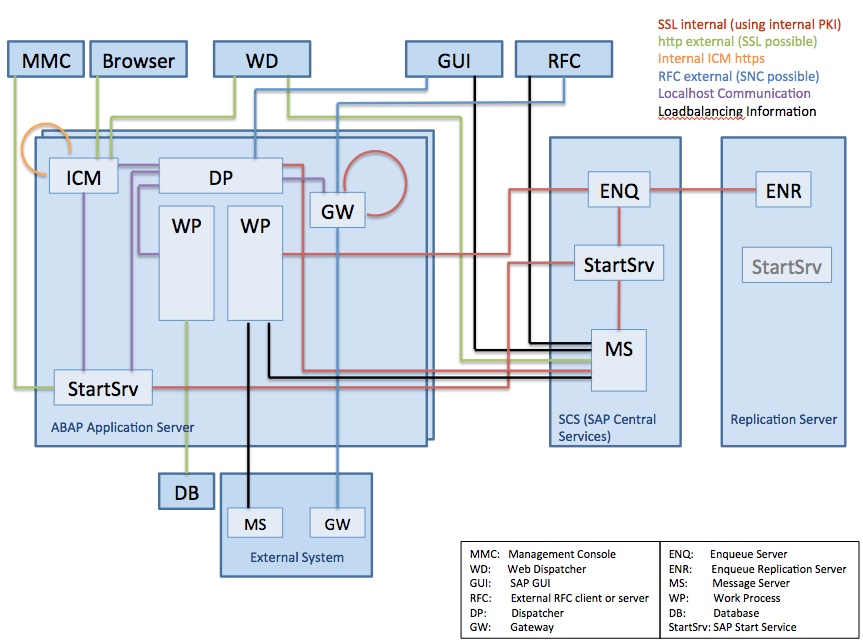 Further use cases for the System PKI

The system PKI is not only used for the secure server communication.

In transaction SM51 you will see that SSL is now used:

IMPORTANT: The parameter system/secure_communication can be safely switched back to the OFF position without harming the system.

Checking the system status with “sapcontrol”

It is possible to check the usability of the System PKI with “sapcontrol” (without changing anything in the system). To do this use:

Reset the System PKI with “sapcontrol”

In general it should not be necessary to reset the PKI as the whole certificate lifecycle is triggered automatically. If ever you want to enforce it there exist 2 web service methods in the “sapcontrol” which are also used by the system internally to maintain the PKI:

If the parameter force=0 (default value) the update is only done when considered necessary by the system with force=1 the update is enforced.

To check the internal PKI some ABAP check reports exist that can be executed in SE38 . They should not show any error messages:

If you need help from SAP Support the following information is helpful to analyze problems with the System PKI :

Do you know whether new installations will have this parameter as default to ON or BEST? It is always problematic to retro-fit such features, so best would be a default to BEST in my opinion.

I am not sure that BEST as default option is the best. We have seen in recent months (SSL issues) that leaving these backward compatibility features can result in downgrade attack. It is probable better to leave this to admins to explicitly enable this.

This sounds like a nice feature for cloud deployments where traditional techniques do not work. I am wondering if it is possible which cipher suite is used for this.

Currently the parameter default for new installations is OFF. We plan to change the default in the future when we have some more experience with systems that are used for different purposes.

When enabling this and running SSFPKITEST3 i see that the Certificate is in SHA1 and 1024 Bits, how can i influence that?  Since at least 2005 we know that SHA1 isn't secure anymore 😉 So any possibilities there?

We are currently working on that. It is not configurable but it will be made available in the future. Probably as new values without configuration.

kindly help me anyone knows, we are planning to impalement in our ecc systems

Are you aware of any solution to this problem?