Working with REST Adapter: A REST to SOAP Scenario in SAP PI/PO

Working with REST Adapter: A REST to SOAP Scenario in SAP PI/PO

Introduction: With the introduction of the REST Adapter in SAP PI/PO, consuming a REST service or exposing a REST service in PI becomes more fun. This is with respect to the fact that the SAP PI/PO ESB extends its capabilities to handle and process REST-based messages (XML, JSON) easily. Prior to this time, implementing or consuming a REST-based service had to be done via third party adapters (e.g Advantco) or manipulation of the AXIS Framework within SAP PI, which is often a tough task. In this blog, my aim is to highlight simple steps needed to expose a REST-based service in SAP PI/PO. An end-to-end implementation of simple REST to SOAP scenario is described.

Scenario: The REST to SOAP scenario is implemented such that, an XML-based/JSON-based request is triggered from SOAP UI/Chrome REST Client. It is received by the Configured REST Adapter, processed and passed to the Receiver SOAP Adapter (configured to connect with the currency converter webservice from www.webservicex.com ).

ESR and Configuration Objects: In this scenario, the necessary ESR objects creation steps are only listed below, with more emphasis on the configuration.

Directory Objects: Described below the necessary configurations steps for each object;

Navigate to the “Channel Selection” and specify a URL path.  This is optional, but useful to distinguish the different scenarios exposing REST-based services in SAP PI, as this will be added in the URL of the sender application (in this case: SOAP UI).

Test the Scenario with XML: To test the scenario, SOAP UI is used as the sender application. The endpoint URL to fire the message to is constructed as shown below;

Obtain a sample XML message from the test tab of the “Message Mapping” object in the ESR to be used as the XML to be sent from SOAP UI.

Change The Sender Adapter Configuration (for JSON to XML conversion)

In addition to the above test, change the sender adapter configuration from XML to JSON, so that SAP PI receives a JSON request message from SOAP UI;

Test the Scenario with JSON: To test the scenario, SOAP UI is used as the sender application. The endpoint URL to fire the message to is the same as in the previous test. The SOAP UI JSON request and response messages are shown below;

The results of the calls to consume the exposed REST service in SAP PI based on the REST adapter are also shown above in both test cases.

Conclusion: With this blog, I have been able to provide an insight into how to expose a REST service in SAP PI/PO using the REST Adapter as the sender communication channel. Additional settings of the adapter can also be used as well, e.g. sending a JSON message as input or output message.

Very well explained. Thanks for sharing.

A Good Induction of Rest Adapter !

Can you also add the screenshots of other tabs of REST adapters (ex: REST resources, REST operations....)

Thanks for such an informative bog post. I was trying to implement the same scenario but I am getting following error in SOAPUI tool  No channel found to handle "POST" Request to /Rojo/CurrencyConvertor/201503. Can u help to resolve this issue also,

1. The same path is given in REST sender adapter in Channel Selection.

2. Used ConvsersionRateSOAPIn XSD at both the ends.

Thanks A. Olatunbosun for such an informative blog.

You need to set the following parameter to get rid off the error that you are getting. Please find the below.

Rest all settings are given by A. Olatunbosun in this blog.

Good Explanation... I am new SAP PI development . Can someone share me Message mapping of this example. 😕

Hi olatunbosun,
Thanks for such an informative bog post, is very interesting. I was trying to implement the same scenario, but, im getting a error in the url and soapui. I have this error in the url No channel found to handle "GET" request to "/Rojo/CurrencyConverter/201503" and this in the soapUI

I hope you can help me
thanks in adnvance

Thanks a lot for the blog.
Could you please explain if we need any other settings in PI. May be REST API or so. anything that is not included in this blog, please explain.

Thanks A.Olatunbosun for the blog.

I implemented the same scenario,but I am getting following error in SOAPUI tool .Please suggest. 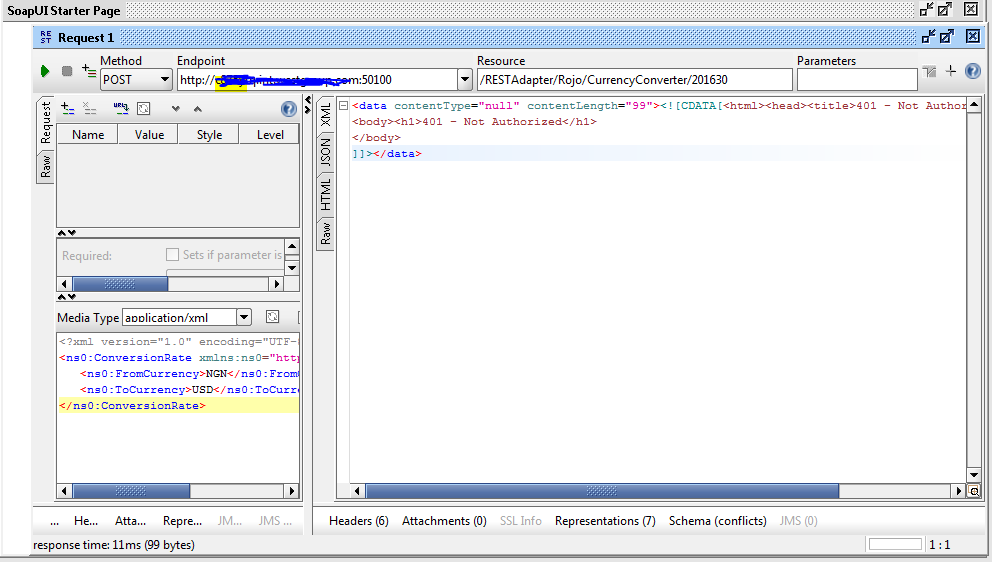 Can you please guide,

How to vreate dT and MT and SI. Can you please provide one example

Can you help me how to append username and password for the URL generated by REST channel ?

Since the login is mandatory for our requirement I am asking this.