First off, I have to recognize that this conversation was started (as always) in some blog comments with Tim Korba, who provided an approach that I tweaked and used in a current project. That’s the best part about this community –  a majority of my “aha” moments have always come by collaborating with others or taking an interesting idea and building on it.

Problem Statement: A given set of data needs to be converted dynamically according to user input, for example – “I want to see all quantities in CS (cases)”. The existing UOM conversions provided with HANA only cover the most basic conversions like length, weight and volume. From an SAP data perspective, we are always interested in converting back and forth between the different UOM’s that a material may exist in, which could be EA, CS, PL, BG, BX, and on and on….

I chose to show this in a graphical calculation view since that’s where I spend most of my time. Of course this can be applied to any other view with the same logic. Tim Korba had started with an attribute view on an analytic view, which is the same train of though but implemented with a different artifact. 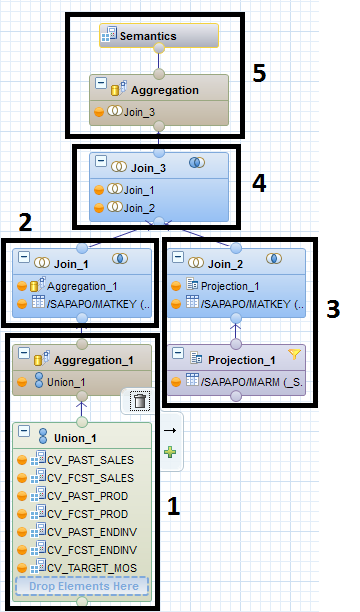 1. Create the base transaction data set. In this case, it is a union created from a number of calculation views, but this could be any dataset really. This data is from APO and is already in BUOM. The aggregation node simply rolls up the result of the union before any joins.

Sample transaction data at this step would look like this.

2. The first join serves to retrieve the BUOM using the material master (MATKEY in APO, MARA in ECC). Depending on application area you might already have this on the main dataset, in this case I did not. This BUOM will be used in case we have no matching entry from the UOM conversion. Since we know all materials must have an entry in material master, we model this an inner join.

Sample data at this step would look like this.

3. Retrieve all the conversions that are relevant for your target UOM. We use an input parameter to apply a filter on MEINH (alternative unit of measure) and also at the same time calculate a conversion factor we’ll use later on.

Input Parameter details – you could also use the MEINH column as a list of values or another table. I just made this direct to keep it simple. 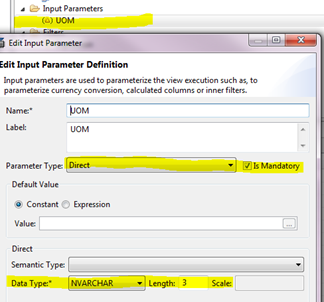 An example of results from this branch of the calc view would look like this, assuming that the input parameter value was “CS”.

4. Using a Left Outer Join from the transaction data to the conversion data, we see if there is a conversion available. It’s possible there is no conversion for the specific material, so a LOJ is appropriate – and we’ll deal with cases where those are not found in the next steps.

At this point the data will look like this, assuming we have a match for the requested target UOM

If we don’t have a target conversion that the user was asking for (via input parameter), then we have to use the BUOM that we started with. So the result of this column will either be “EA” or the target of “CS” for example. 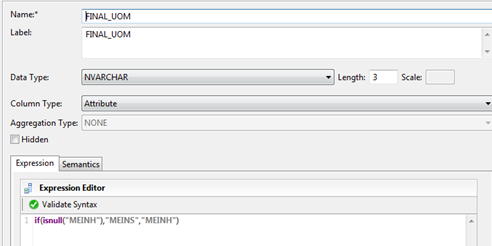 This column will convert into the target unit if there was a target unit found, else we’ll revert to the original qty, the same logic used in deriving the UOM in the other calculated column. The key here is to make sure on the semantic tab we are associating this QTY with the UOM we derived in the previous calculated column. 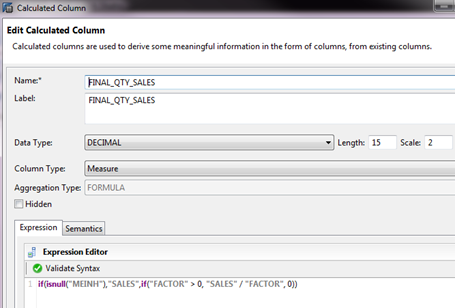 Testing the opposite scenario, where there is no target found (using “XYZ” as the target UOM), the following would be the result at the final aggregation node. Since there was no target found, we have to revert back to the BUOM we already knew.

As seen through a client tool like Analysis for Office, anytime we are mixing units, the aggregation will show an asterisk (*) since two unlike units can’t be aggregated. When you look at the material level however, you can see the qty and the unit associated with it.

I keep repeating to say it: the folks that really stand out in SCN aren't the super-techies that know each flag and every switch (although that helps - a lot... 😀 ).

It's the ones that can communicate and that take the effort to write up their stuff.

Texts that are well structured, good to read, interesting and rooted in their own experience.

Telling about the stuff that they've done, tried, failed and finally succeeded at themselves.

Thanks Justin for coming back over and over again and sharing such good content.

Everyone who's reading this and also wants to write: take a close look!

This is how technical blogging is good.

It may not be the only way, but it's a pretty darn good way!

Is there a plan by SAP to offer Material specific UOM conversion in HANA as a standard feature ? If yes, can you please provide any leads on the same ?

I have yet to hear of anything specifically. Maybe someone like Michael Eacrett can answer that question from an SAP Product perspective.

Nice read and will try it out.

But, does your solution also factor in the Lower-Level Unit of Measure in a Packing Hierarchy?