#3 – How To Implement Lightening Fast OData Services with Exchange Table 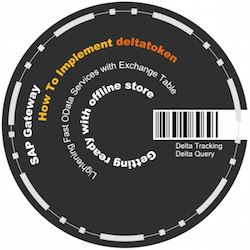 This H2G explains how to extend OData services so that Delta Tracking and Delta Query work by taking advantage of SAP Gateway & Syclo xChange Framework.

The following software components installed on the ABAP system, including the Syclo foundation framework:

The goal of this H2G is to implement both Delta Tracking AND Delta Query in OData. The Delta Query will return the delta portion of data which is added via OData Create/Update/Delete operations.

In order to implement Delta Tracking, we need to go through 3 steps:

1 – Exchange Table is the ABAP persistent database table where information identifying the changed data is stored. Typically an exchange table uses a minimum standard structure which captures only minimum information about the data object that has been changed, such as mobile application (= configuration identifier), object key, last changed timestamp, change action (Insert/Update/Delete), and user name.

2 – Enhancement Framework Implementation (EFI) is ABAP program, which will be called by all the CUD operation – it simply capture the data change during the CUD events and update the Exchange Table info so that it can keep track of the Delta history.

3 – Once we have done with Exchange Table and EFI, we need to configure them altogether as a single Exchange Object in Syclo Config Panel, so that Syclo xChange Framework can understand they are related each other.

That’s all for Delta Tracking!

That’s all for Delta Query!

Yes, it is not that complicated.

Let’s implement Delta Tracking as we just learned above.