SAP University Alliances team India’s journey to influence the Millennials on how they can Be Part of the Next Gen for the Digital Enterprise at SAP made its 8th stop at our UA member schools Indian Institute of Technology, Kanpur – Techkriti 2015 in Kanpur, Uttar Pradesh from 19 Mar to 22 Mar 2015. A large number of students gathered to exchange knowledge. This is one of the top Engineering colleges in India where SAP participated as the Major Sponsor. 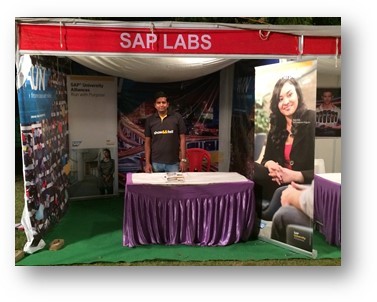 The EarlyTalent team sponsored this festival and UA, represented by our fellow colleague Manu, supported in reaching out to 10.000+ students and 30 faculties at various places such as the Lecture halls, SAP booth, via Banners, Distribution of UA flyers & interactions at the SAP booth. The event which was spread over 4 days had a huge footfall of more than 10000+ students. The students were informed about the various technologies that SAP is innovating in such as IoT, SAP HANA Cloud Platform, Industry 4.0, Big Data etc. The students were also encouraged to register on various portals like HCP Student Center. There was huge excitement among the students at the auditorium on seeing the wonders that IoT can do with the help of S4HANA and wining prizes via the on-the-spot quizzes. 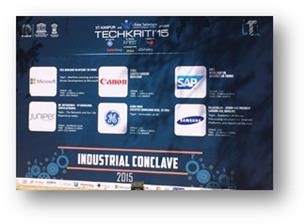 We would take this opportunity to sincerely thank our EarlyTalent colleagues –Tejaswini Chalam & Dinu Nanjappa for their tremendous support and Viswanadh Akella and Rohit Nambiar for addressing around 300 students on IoT and IoT integrated with S4HANA which involved 1 hour of lecture and followed by 2.5 hours of Workshop. The students found the session extremely useful and a few of them have shown interest to take up Certification courses and build their career in SAP.