Using the Internet of Things to Ease Daily Commutes

Earlier this week, I talked about the hassles of commuting by car in Bangalore. Today we move on to public transportation. Busses face the same challenges as cars in India, congested streets, overcrowding and delays. Plus routes are often confusing.  Multiple bus routes may service the same location but which one can get to your destination fastest?  And are there any open seats on the bus? When will it arrive?  This was the reality that SAP Custom Development colleagues Neha Bansal and Sudarsan Gokhale Raghunath faced on a regular basis. When it came time for them to think about building an app for DemoJam, they decided to address a topic they know well – the morning commute. 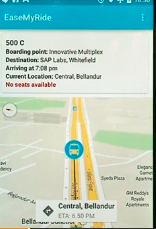 EaseMyRide is a solution for regular public transport commuters and adds value to transport companies in their business processes as well. It is a mobile-based application that helps commuters travel comfortably while reducing wait times. The solution uses the Internet of Things (IoT) technology, and is built on the SAP HANA Cloud Platform. It integrates with SAP ERP software for posting trip settlements and uses SAPUI5 technology for an intuitive interface. It also allows the bus companies to analyze trip information.

But while the app they developed is simple and easy to use, the path to develop EaseMyRide was not.  To start, the team needed to research the technology available on buses.  They needed to understand how the ticketing device worked. Could it be programmed to transmit the data that was needed to determine the available seat on the bus? They also needed to see whether the buses could transmit other data for global positioning. They talked to the manufacturer of the ticketing device and examined manufacturers specifications for the buses to get the information they needed.

This team, which also included Amritha Dilip, Sauradipta Mishra, Ankit Saxena as well as Sunil H.P. (a partner from Exa AG) were participating in their first DemoJam. Besides researching how to communicate with the bus, working on IoT technology was new to all. They also needed to learn about programming on Android devices. They started working on the

consumer portions of the app first and later added features that would also benefit the bus company. During the development process, they considered how both the consumer and the bus conductor would use the app.

Their application was voted to the fourth spot which is a terrific showing for first-time competitors. In addition to

their strong showing, they enjoyed added benefits of DemoJam.  Instead of working on pieces of larger solution, the competition allowed them the opportunity to develop something from end-to-end. Plus, DemoJam provided the opportunity to learn new skills, connect with new people and broaden the way they think about user interfaces and application development.

Also look for my other blogs on DemoJam 2015 Winners on SCN:

Get to Know the Winners and Innovators 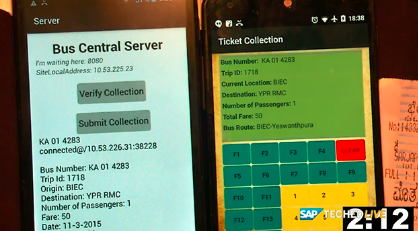