One month ago the technology days of the German SAP user group DSAG took place. Wait? One month ago? In the last month I was very busy especially preparing SAP Inside Track Frankfurt. But during this event I was aware that some important messages are not known in the SAP community. And so I decided to write a quick blog about it.

Next Major NetWeaver Release was announced

At the S/4HANA information point the next ABAP release was announced: S/4HANA onPremise as well as the Business Suite will run on the same NetWeaver 7.50 release. 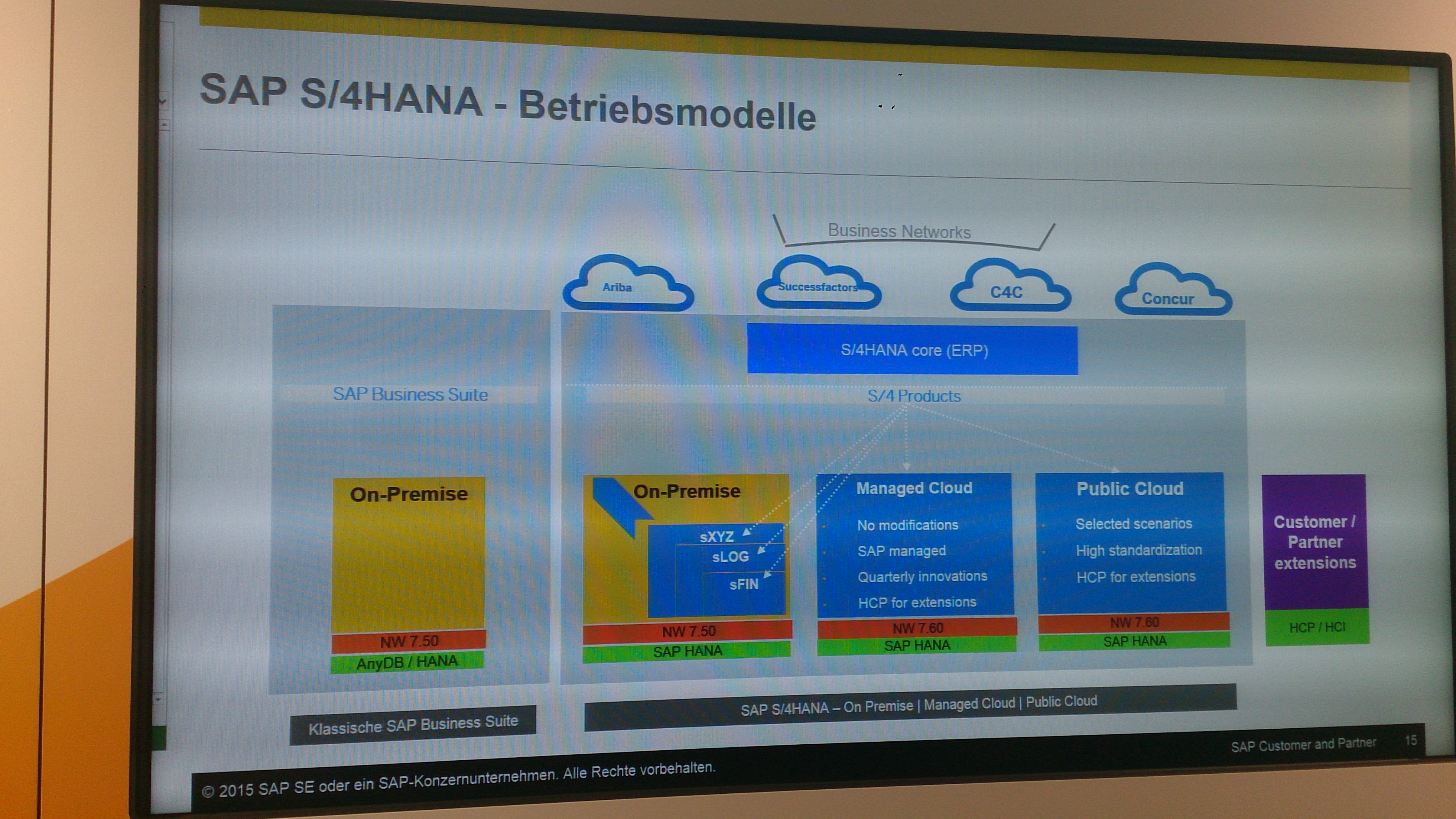 The message of this slide is as follows: Next Ehp of SAP Business Suite will require NW 7.50 and so does S/4HANA onPremise. The next major release after 7.40 was announced as unicode-only you have to hurry up in case you are still on non-unicode systems and plan a migration.

One major topic of the keynote was standardization of processes and I’m glad that technology experts realize  this fact. In this has is very important since it affects every aspect of ERP. Let me give you one example: if you want to benefot from Fiori then you have to accept the fact that your UI won’t have the same features of an ABAP Dynpro UI only expert users can handle.

The UI sessions about portal, NWBC, Fiori and Mobile have been visited by many people. In the working groups people from SAP asked the users about use cases and requirements for future UI development. The UI topic was ocurred in other working groups, too. I was really impressed of a UI5 prototype of SAP NetWeaver Folders management shown by Lukas Bretschneider. I also had I talk about UX strategy in the UX track of DSAG and

So let me summarize: DSAG Technologietage was an awesome event and I really appreciated the fact that SAP was interested in uder feedback about specific products but also the the product strategy. SAP keeps close contact to customers.

With S/4 HANA whether ABAP development is only allowed in On premise edition only? Managed and Public cloud says that HCP for extensions? Kindly clarify.

Well, in fact SAP already gave some information about extensions but most of it is for partners only at the moment so I think I can't blog about it. But there are several options for extensions  and some of them are discussed here: http://www.bluefinsolutions.com/Blogs/John-Appleby/February-2015/The-SAP-Business-Suite-4-SAP-HANA-(SAP-S4-HANA)/

Thanks for the clarification. I believe SAP should clearly clarify the development and extension options for S/4 HANA. When to use ABAP and when not to use. Hope we will see this soon from SAP.