“Why does the most handsome building in downtown Palo Alto not have a user?”

That was the question architect Param Bedi and entrepreneur Sanjay Shirolé asked when they were searching for a place to launch HanaHaus, a brainchild of SAP Chairman Hasso Plattner. The “handsome building” in question was the historic New Varsity Theater in the heart of downtown Palo Alto, the lower floor of which had remained vacant since 2011. 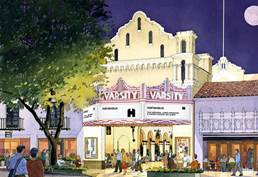 We brought both Sanjay and Param on board at SAP to transform three pages of Hasso’s notes into HanaHaus, which opened earlier this month on the ground floor of the beautiful, historic building. It is a true multipurpose space meant to serve as a hub for software product creators that is fully integrated with the wider community.

There’s an opportunity for anyone to purchase and enjoy Blue Bottle Coffee in the public seating area, which includes an outside patio. There is also a community workspace inside where those who wish to work can rent seating or conference rooms for roughly $3 per hour. The indoor space can also be transformed into a theater, complete with an elevated stage beneath where the old movie theater screen used to be.

The purpose of the space is rooted in the most basic principles of design thinking: the fostering of multidisciplinary connections and the generating of empathy across sectors and interest groups to foster innovation. Sanjay, Param and their team have really captured the initial ideas and discussions with Hasso well, bringing his vision to life. I caught up with them in the new space shortly after the opening to discuss the project.

“There are great synergies to be had when you mix work, learning and play in one place,” Param told me. “In order to be innovative and creative we have to break out of that mold of zoning these activities.”

The next, great product could very well come from those in different organizations coming together in ways they may be reluctant to do in their offices or in their homes, he told me. HanaHaus is meant to serve as that “glorified office” and help spark these connections.

“We want to be the place that will take an idea into a finished product,” he told me, but not at a cost to the community. Anyone can enter HanaHaus — whether they are developing software or merely looking for a place to relax.

“We’ve really taken this and literally given it back to the community. When we presented it to the city, they couldn’t believe it.”

The key to HanaHaus isn’t the coffee, the free wi-fi or the conference rooms. It’s the bringing together of diverse groups and keeping the space – one for innovation and the sharing of ideas – open to the wider community.

“For the spark, there has to be this cross-fertilization, otherwise nothing happens, and I think that will happen here. So, I’m really excited,” Param told me.

This is a prototype for us at SAP to test whether building a hub for software innovators around a culture of coffee and open to the wider community can produce breakthrough innovation.

The combination of the open space and the innovative energy are already attracting members of the general public as well as those in the technology sector, Sanjay told me. There is a growing wave of requests from executives at established tech companies and venture capital firms to reserve the new meeting spaces for their teams. But the goal of the space isn’t to serve as an extension of an existing company’s office space — and, yes, that includes SAP. No one from the company is afforded special treatment, including me.

Instead, the space is available to anyone who can pay to reserve it, and no one can permanently rent any space. It is a true application of design thinking to foster its basic principles — a place for innovation not closed off to diversity and community, but fueled by it.