This is my 4th post related to mapping in the Design Studio SDK.  Including this post, my last 3 are specifically related to vector-based maps using D3 and TopoJSON.  I’ve taken the maps a step further to include a new layer in the Choropleth Maps, as well as a new component called Location Intelligence maps which allows you to plot by latitude and longitude instead of by geographical feature.

Below is a preview overview of what is now available from the SCN Design Studio SDK Development Community extension.

What’s New?
The focus for this iteration was placed on new functionality and additional bug fixes. 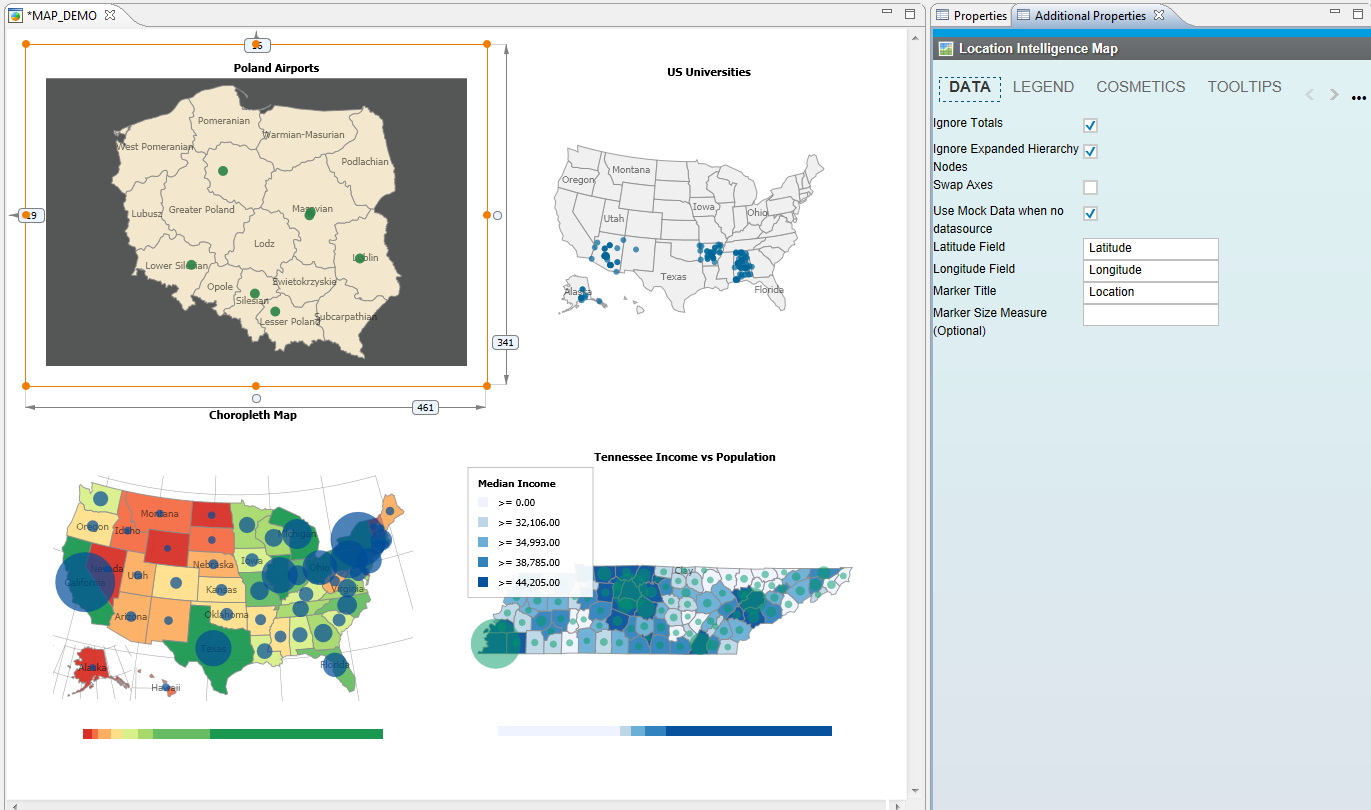 This is available NOW from the SCN Design Studio SDK Development Community link.

Mike, your progress on complex stuff is unbelievable 😉

Yes, it works in Design Studio preview mobile mode (the QR Code scanning test method) as well is on BI Mobile App per my testing.  FYI - I've only got a (now ancient) iPad 3rd gen (the first to have Retina display) so it's a bit sluggish but I did have 3 high vertex count maps in my test and I didn't disable transition animations etc.  I'm sure more recent iPads or mobile dashboards with less maps going on will perform much better than for me.  Below is an example from the BI Mobile app: 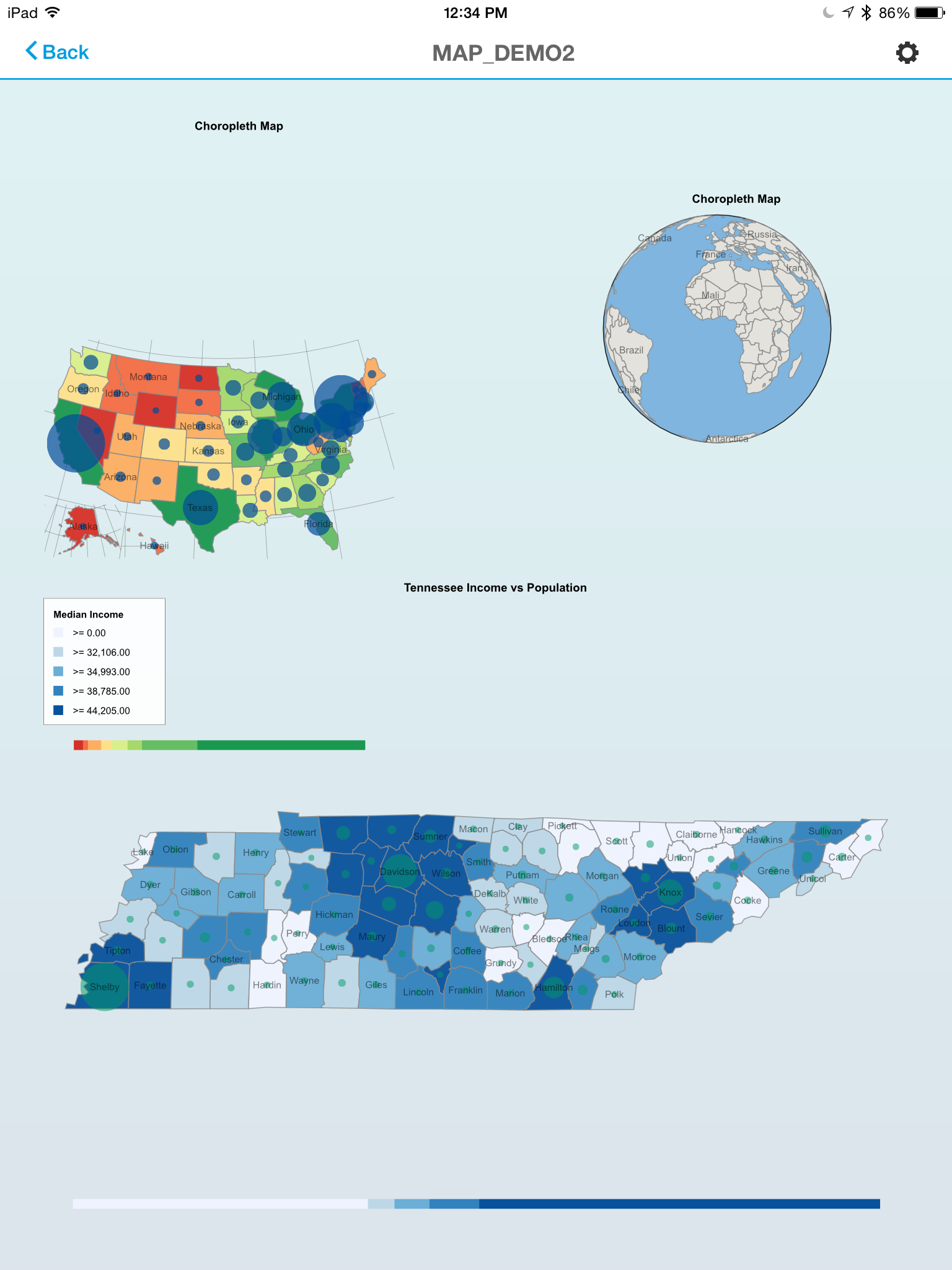 thanks for that great and fast developing solution. The feautures are just awesome. I am really looking forward to DS 1.5 and if SAP's standard map features will come anywhere close to your solution.

However, since installing the latest version of GVIS the system keeps telling me that I need to install the "Standard map pack", as you moved some components. Unfortunately I have no idea what the "standard map pack" is or where to find it. Maybe I am just blind. Can you please give me a hint?

Well I have installed "standart map pack" from here sdkgeovis/archives at master · org-scn-design-studio-community/sdkgeovis · GitHub but still have the same system warning (and Mike's promised error after it 😉 ). And I also want to know how to fix it.

Hey guys, sorry about the confusion!  I'm frankly surprised anyone was able to use the old "Part 1" leaflet maps I made.  I had the impression they were too buggy and incomplete for anyone to use effectively.

To be honest, I lost interest in the old "Part 1" maps and they were taking up way too much space in the plugin pack so I moved the geolookup content to the optional 'Standard Map Pack' which is outside of the SCN plugins feature to free up the room.  Can you guys try to download that one from here and let me know?

Perhaps to eliminate the whole experimental part 1 'geovis' plugin, I should move all pieces to the independent map pack to eliminate any confusion.  I will gladly keep this older one on "life support" in an independent package.

PS with DS 1.5 coming soon and maps coming with it I feel that the "Part 1" tile based maps functionality may no longer be needed, but time will tell!

Hey, actually we are just playing around and test all the features that your plugin provides. I think our future focus will be on vector based maps for dashboards and mapping with e.g. openstreetmap / geo coordinates for other use cases like customer or equipment locations.

Thanks for the feedback.  It's nice to hear how folks are playing with these components.  It helps me know what's maybe more useful to chip away at.

FYI - I still have high interest in vector maps (if parts 2, 3 and 4 didn't make obvious!) so I think this is an area where I'll chase further as ideas come up.  This part 4 focused on the location-based example so you should be able to plot points, etc.

I have had thoughts of incorporating basic tile functionality into these vector maps as illustrated here:

This would only make sense if the geographic projection was Mercator, but maybe useful?

In my opinion a nice to have feature, but nothing that I would miss if it wasn't there. At least from my current point of view - and that changes from time to time according to our internal customer's expectations 🙂 .

If any feature I miss comes into my mind I'll let you know.

As for me Choropleth Maps with bubbles-markers on it is enough (especially if you plan to add clustering of bubbles). But I didn't get it on my map project. It looks like all the bubbles just placed in one point (0,0) in left upper corner despite the fact that all of them have different coordinates. So maybe I do something wrong. 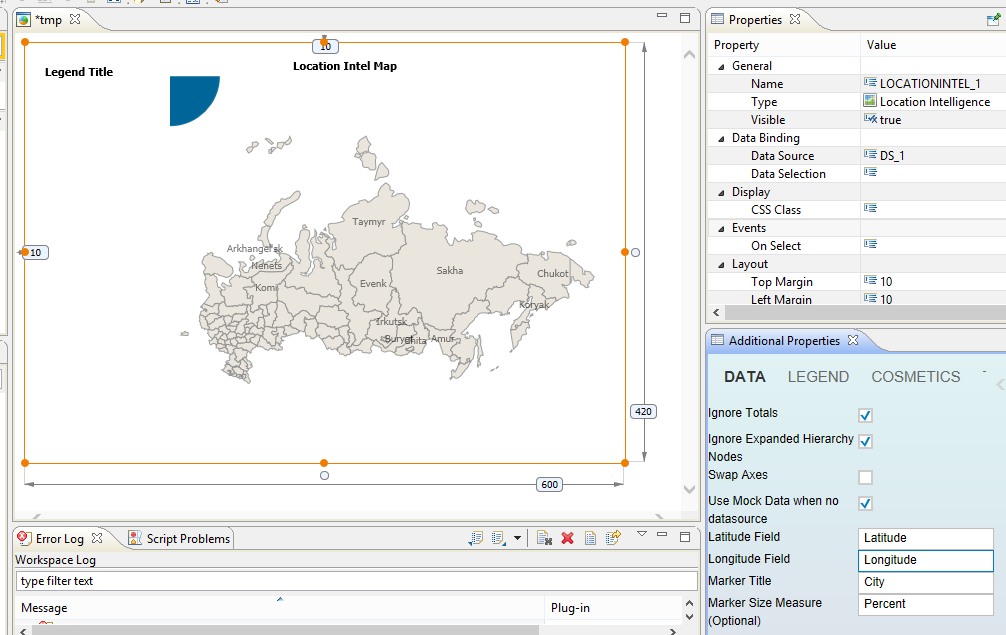 Can you share a sample screenshot of your data?  Or just confirm your Latitude column is titled 'Latitude' and same for Longitude?  Maybe they are named something else or reversed?  Basically if the projection cannot figure out the lat/lng, OR the lat/lng is not within the planar space of the projection area, it'll resort to planar 0,0 (top left as in your screenshot).

A sample screenshot may help us see more if you can just show the rows/cols.

First of all I have a lot of checked points where I suppose the reason was.))) You listed most obvious of them.))) And now be sure - yes columns names are 'Latitude' and 'Longitude' and they placed correctly. I even tried to use different types of that cols (real num, char with delimiter '.', char with delimeter ','). I should use the real world geo coordinates for map, isn't it? Or maybe it means some relative values for each different map? Is everything really simple to use as I imagine - just need add data source with coordinates, choose map and it'll be ready as a start, or there is a something special config I need to do? Thx!

Ah, a few things...  Your lat/lng is using commas instead of decimals.  I presume this may be a locale thing and also because you might be storing lat/lng as measures instead of as dimensions.

My component will be looking for lat and long as dimensions and not as measures, and also will be expecting decimals and not commas.  I think this is the issue.

If you want to mock up the data to be sure, you can do so in the BYO Data component:

Example based on your first 2 rows using BYO Data with the map: 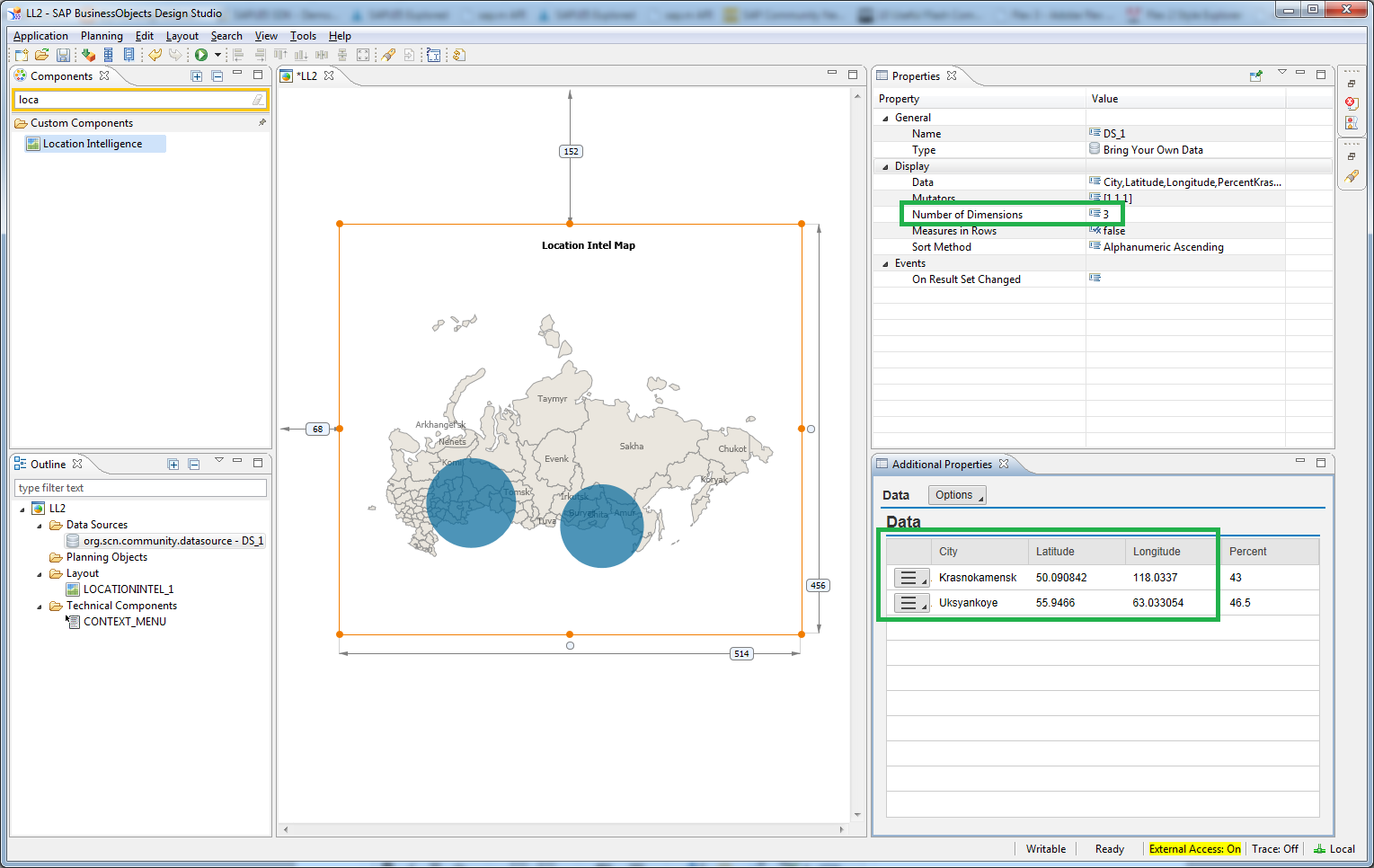 it's working now on BYO DATA. Likely you right about locale thing (аnd of course I use dimensions). Trying to make usable data source and switch your component on it.

Thank you for operative answer!

Thanks a lot Michael, it absolutely works now. By the way why don't you use lat/lng as a measure considering a fact this values work as a usual decimal parameters? I mean that you can count aggregated values such as a average and use it for show as a cluster of several intersected bubbles.

Glad to hear it's working.  I could support lat/lng as measure fields also I suppose, however I think storing lat/lng as Measures/Key Figures in the case of BW would not make sense because of the locale issues and also they should never roll up as Measures do, so I just didn't want to make it messy.  If you wanted to do an aggregated count of lat/lng points actually it would work out better to have lat and lng as dimensions/nav attributes and use a counter to have a bubble grow. 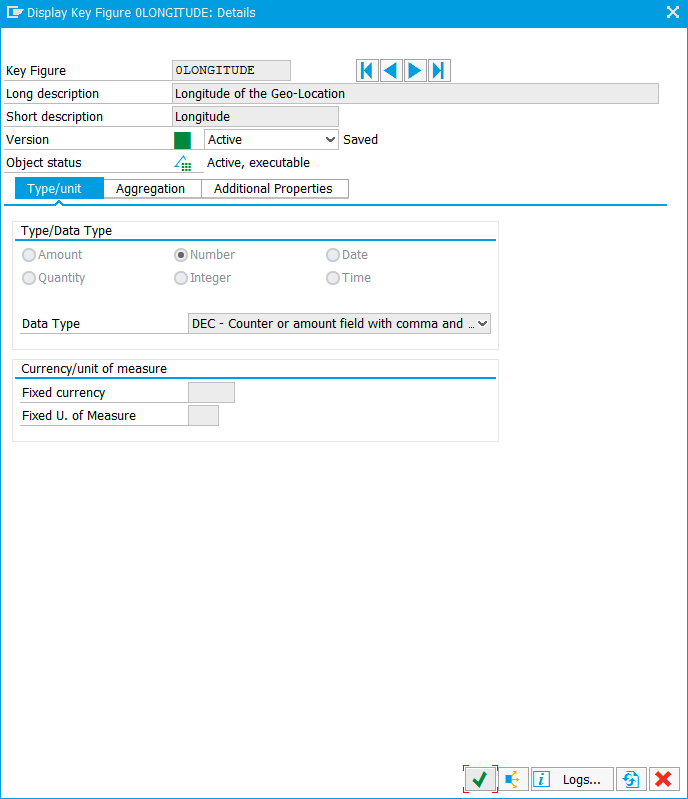 Yes, and also aggregation is set to SUM which is just weird to me but whatever.  I think often they are used as Attributes for Master Data cases like here: 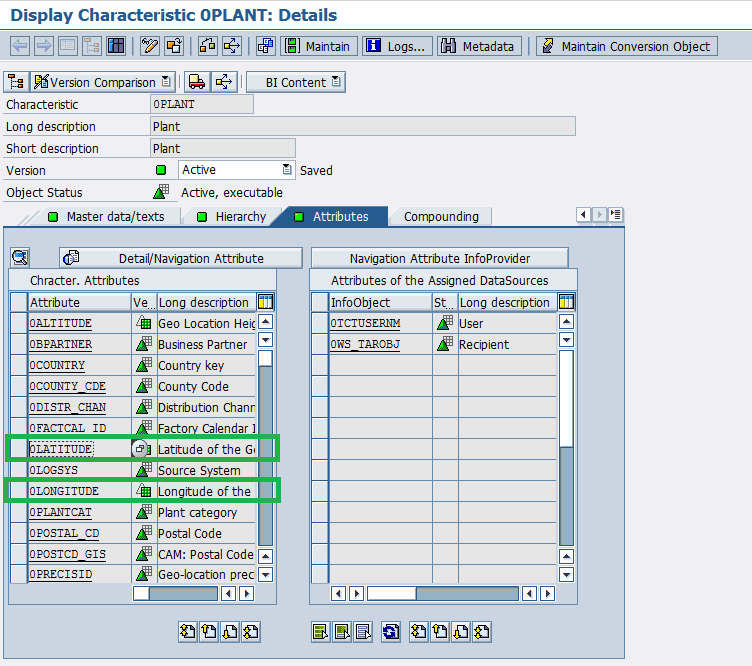 Yes, that is how the master data is set up in my BW demo system.  So will the standard 0LATITUDE and 0LONGITUDE attributes work with map component?

Attributes are not yet in the SDK. those are coming with 1.5

If they are marked Navigational, yes.

And before it's said, we've already heard "marking them as Navigational Attributes would have a huge performance impact on the overall cube." although I've not personally experienced that.