Driving in Bangalore is typically a chaotic mess. Roads are clogged with vehicles and a short distance drive can turn into a long and frustrating commute.  So developing an app that would help to alleviate the commute was something that addressed a real life problem for our next SAP Custom Development DemoJam team.

Shailesh Velaparambil and Kopperundevan K are good friends as well as SAP Custom Development co-workers. They both drive to their office location in Bangalore. Often, on their way to work they would recognize fellow SAP employees waiting for a bus and would offer a ride. Out of this experience and with a desire to help fellow employees, the concept for SAP Glide was born.

They recognized a need for ride sharing – both to alleviate the mad crush of Bangalore streets and use the concept of load balancing to ease the carbon footprint.  They teamed with Meet Shah, another Custom Development co-worker with an expertise in mobile technology to help them work the mobile aspect. Naman Kumar also assisted on mobility issues. Siju Pavithran from partner company, Exa AG, joined the team to help with the traffic aspects of the app. Working together, after hours and on weekends, they came up with the prototype for their app. 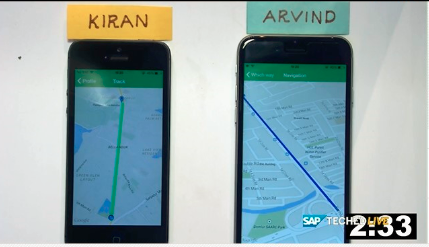 Unlike conventional carpooling apps, Glide eliminates the pain points of commitment, detours, and waiting time while promoting social interaction. The driver can enter in his or her starting point and the number of people that they would be willing to pick up. Running on the SAP HANA platform and using predictive analysis, the app proposes a driving route and pick-up options.  At the same time, someone in need of a ride can simply walk to the curb, make a request, and wait for a new friend to arrive.  Plus it takes into account commonalities between the rider and driver – checking to see if they have mutual friends or interests. The app provides information on both driver and rider to all users so you always know who you’ll be riding with.  And, if a driver decides to take a detour or stop for coffee, Glide will match the rider with the next most similar person who is driving that route.

This team was new to the DemoJam experience and described it as both exciting and tense. While they had practiced their presentation many times before they hit the stage, the last run through was anything but smooth.  Their board that they needed for the presentation disappeared, remote control cars wouldn’t work and the internet connection failed forcing them to use a phone with a mobile Hotspot. The board was found just before they went on stage and their actual presentation went smoothly. And now this team is hooked on the competition.

The SAP Custom Development team in Bangalore is hugely competitive, with 47 teams entering DemoJam.  Just making it to the stage to present is an honor. The second place win for the Glide team certainly gives them bragging rights with their co-workers.

Great work guys !! All your hard work and long working hours have really paid off.. A well deserved win.

I really liked this idea & also, their thought of bringing in the security aspect of it... Well done team!

Team- Your idea is very practical and can be extended for Gurgaon too with a special twist. Here the ride- share can be with non SAP office goers who work in the same building as us.