“How many of you know what ‘eh’ means?” GIRLsmarts4tech volunteer Jennifer Coleman asked 50 American girls, as 64 Canadian girls backed her up – all of which were connected using SAP’s video conferencing system. It was part of an icebreaker, and we wanted to see how many of these young ladies knew about Canada’s iconic colloquialism. 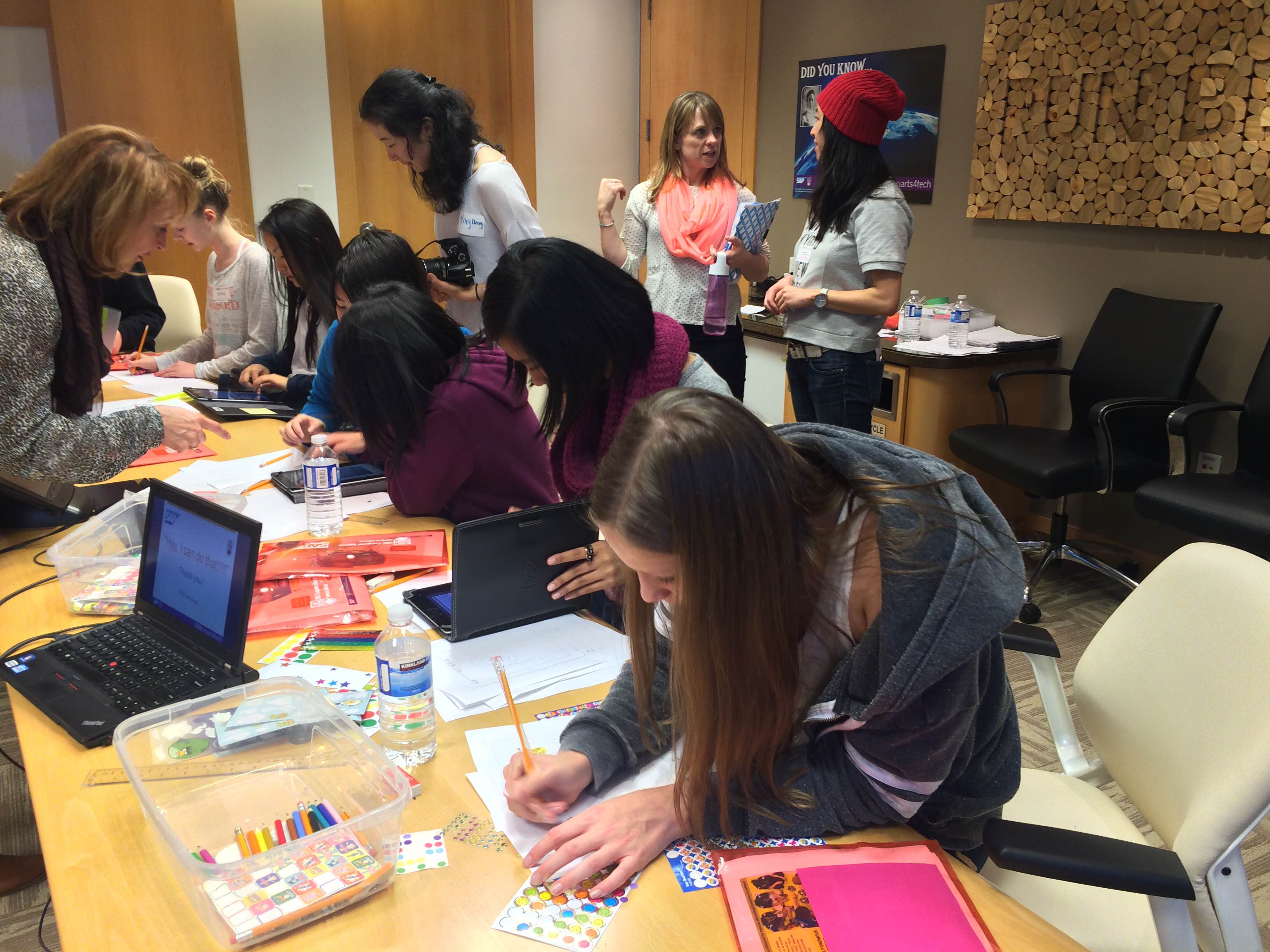 It was part of GIRLsmarts4tech, an international conference gathering Grade 7 girls together and encouraging them to explore the field of technology. The icebreaker soon eased into fun and friendly conversation, which included “Have you been to Disneyland?” and “How cold is it in Canada?” as well as genuine curiosity and excitement about the chance to learn more about technology.

It’s Time for This Conversation

degrees are in computer and information sciences, according to the National Center for Women Information Technology. That discrepancy drove SAP to partner with the University of British Columbia, launching this one-day workshop that spanned SAP offices in Vancouver and Palo Alto earlier this month, and included 50 volunteers.

Participants were interested in a variety of technologies, and the workshop design ensured that there was something for everybody. Each girl participated in four different sessions, covering topics such as programming, social gaming, music & technology and user interface design.

The music and technology session taught girls how to record, edit and mix tunes using software. It was a very practical exercise because they were songs the girls know by popular artists, such as Kelly Clarkson. “The software looked confusing,” said Kelsey, 12. “But it’s not as hard as I thought it would be.”

All the new information seemed overwhelming at first, but time in the driver’s seat really helped the

girls understand user interface design. To design a video-making app, they brainstormed initial ideas together, and then used papers, stickers, pencils and an iPad to bring their designs to life.

“I plan to use POP to design another app,” one of the girls said, clearly impressed by what she’d accomplished on the iPad.

Once they got their hands on the technology, the girls became fully engaged with their projects. All the participants seemed to wish there was more time.

GIRLsmarts4tech cofounder Darriel Dawne ended the day by asking the girls if they felt more inspired to continue learning about technology.

All of the girls raised their hands.

Not bad for volunteering on a Saturday, eh?

Loved reading this blog, Anita! This is a topic that I am passionate about as well. Please let me know if any opportunities emerge for volunteer opportunities in NSQ. 🙂

Thanks, Krysten Gentile! Not at the moment but I'll keep you posted 🙂

Krysten Gentile bet there will be opportunity if you stay in touch with John Astill .  He did some wonderful stuff as I mentioned before with Rutgers Innovation Center (Prep school in NJ).  I think it would be great to host such an event in NSQ and bring the schools to us (not just us to the schools).

In essence, if it doesn't exist create it 😉

I agree, Marilyn Pratt! Krysten Gentile and John Astill, I'll be in NSQ mid-April. Would love to continue this conversation with you in person if interested!

It is so important that more women join our sector. I'm sure the ux will be shifted on the next level. Women got a better feeling about how to handle information in a good way.

I see this every saturday when my grocery list is managed by my wife.

Florian, you got that right - it's not about women becoming more like men or men more like women. It's about providing everyone with opportunities to contribute their best qualities.

Great seeing initiatives like this happening at SAP! Looked like you have a fun time, eh? (Ok - maybe I didn't use it right 🙂 )

Anita, thanks for sharing this story! We need more attention on this here in the US. I look forward to your follow-up reports on GIRLsmarts4tech. This will be featured on the SCN homepage this Friday.

Fantastic initiative run by visionary founders and passionate volunteers. Proud of SAP and my fellow Vancouver colleagues! Thanks for making a difference.

Anita, thanks for posting and sharing a well-written recap of this event! My 12-year old daughter was fortunate enough to attend the GIRLsmarts4tech workshop. You can imagine how happy I was to hear the excitement in her voice and see the twinkle in her eyes at the end of this day-long event. "YES, you can download all the apps you used today!" 😆

One of my daughter's classmates, who also attended the event, told me "I want to work at SAP!" I can see how easy it is to get star-struck, when there are rock-star volunteers around to make lasting impressions. 😉 Thanks for giving our girls a head start!

You guys (gals) ROCK!  This is the wonderful kind of work I saw John Astill  facilitate last month in NJ with an activity called G.E.T (Girls exploring Technology).

Love to see this kind of thing go viral.

Kudos to you all.

I must say, we should try this in India too 🙂

This is a great initiative. In Bangalore, we have the Goldman Sachs sponsored initiative called WETECH (women enhancing tech), which gets High school girls to get trained on app inventor and build out a social app over the summer vacation.

Really enjoyed reading this post, Anita. Great way to break the ice with Canadian slang. I'll have to try that next time 😉

Please check out a video of next gen women entrepreneurs in tech, pitching their app built for woman by woman.

They are high school girls from India