On February 5, 2010, in a T20 international (Cricket) against Pakistan, Shaun Tait bowled a ball measured at 160.7 km/h, the fastest ball ever recorded in Australia. His fastest ball was against England at Lords at 161.1kph (100.1 mph) in 2010, which is second fastest all time, and the fastest amongst active bowlers as of January 3, 2015. This past week in Melbourne, Australia, I had the honor of requesting him to bowl a few “low-key” deliveries to illustrate a point for the assembled coterie of the Press and SAP folks from all over the world. 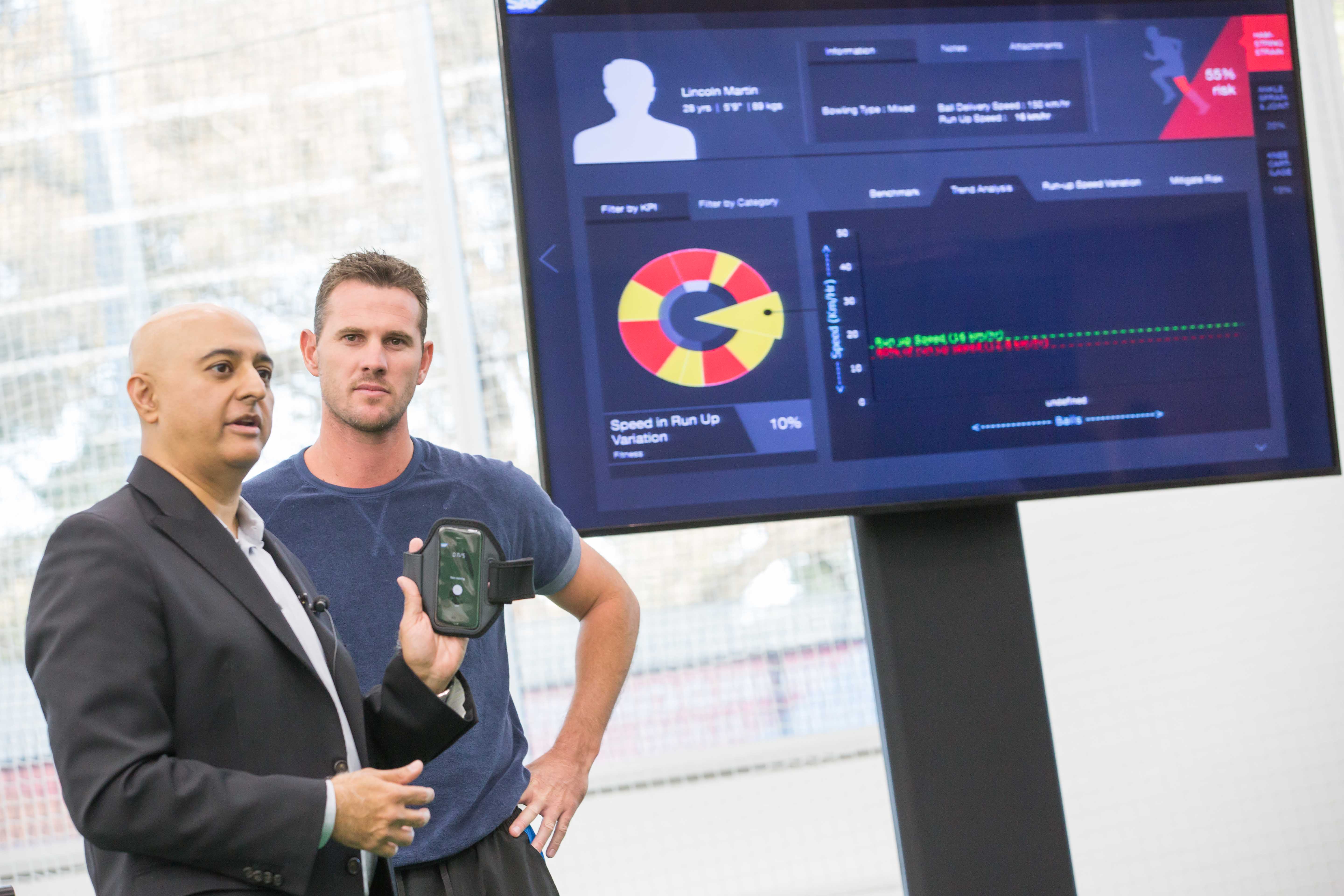 So why is this relevant? And, what does this have to do with SAP HANA?

This exercise was part of a Panel session titled: The Internet of Things in Predictive Sports Medicine; that was the central segment of the second day of the SAP Media Summit that had been convened to coincide with the ICC Cricket World Cup 2015 in Australia-New Zealand. This session was intended to explore and discuss the value of the hyper-connectivity that we experience on a daily basis with global thought leaders in the field of biomechanics (Dr. Eduard Rene Ferdinands and Dr. Oren Tirosh), sport (Shaun Tait, Kerri Pottharst) and technology (Irfan Khan, Puneet Suppal). 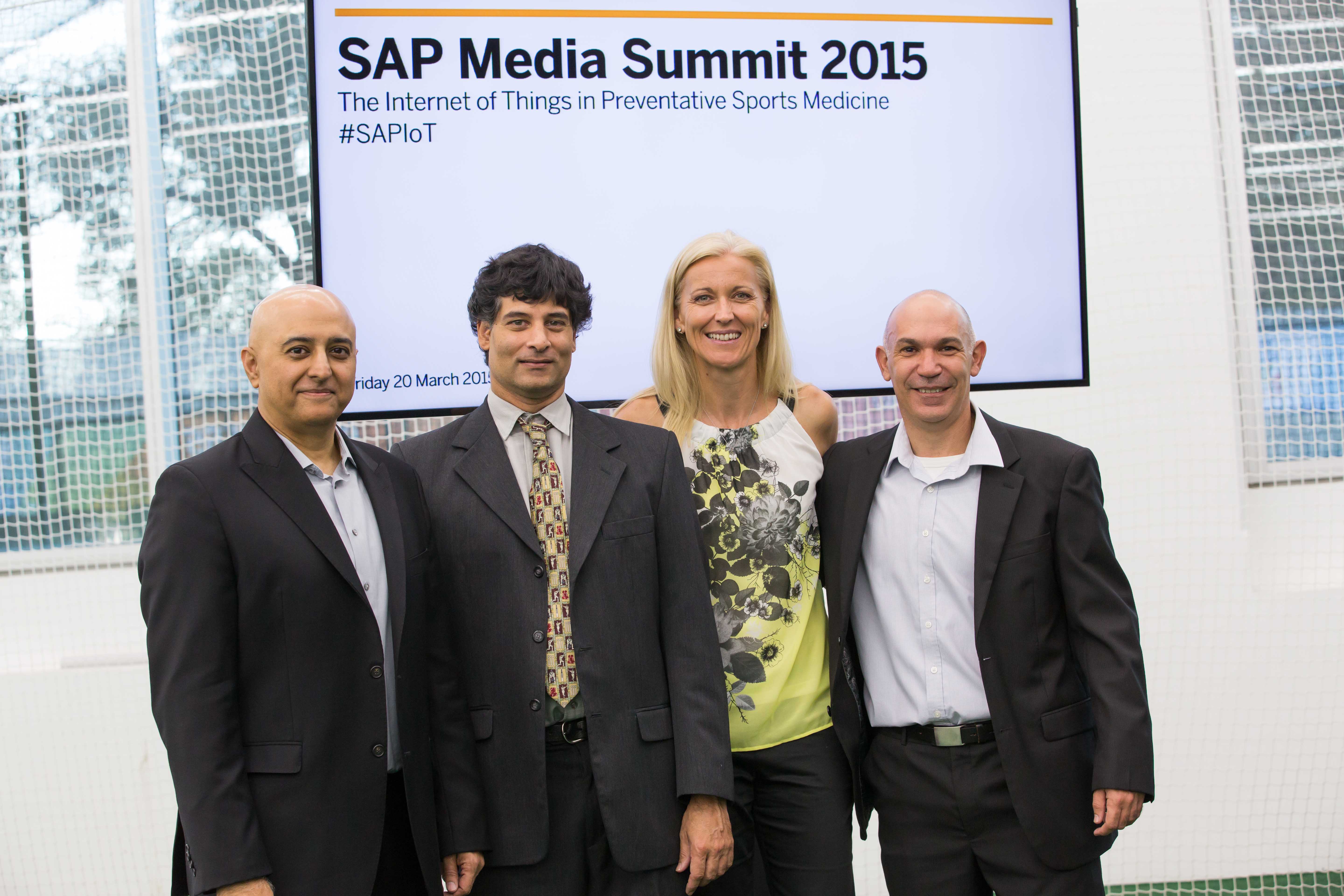 The Customer Innovation & Strategic Projects (CI&SP) team at SAP delivered on the challenge of producing a proof of concept (PoC) application (working title: Injury Risk Monitor (IRM)) that leveraged all that is cool and capable in technology to help a coach and/or physiotherapist and players to anticipate the risk of injury and pre-emptively address it. To illustrate the fine points of IRM we looked at the use case of fast bowlers in cricket as they tend to be quite predisposed to injury. Surveillance studies have indicated that there could be a myriad of reasons for injuries to fast bowlers, the main factors being workload, technique and fitness. Recurrent injuries not only have an impact on a player’s career and the team’s performance record, but could also impact the financial fortunes of professional teams and individual country boards.

The team worked with input from a number of sources including Dr. Eduard Rene Ferdinands, Dr. Oren Tirosh, and Andrew Leipus (physiotherapist of an Indian Premier League team). The global effort of the SAP CI&SP team together with others across geographies and functional groups put life and soul into this PoC for IRM (kudos to the entire team from Palo Alto to Bangalore to Melbourne and Sydney). Sijesh Manohar (who has played a central role in the development of the IRM prototype), has described the workings of this PoC application in a recent blog post.

It should be noted that this PoC application successfully embeds real-time insight across a range of data types and sources within a process that possibly couldn’t be defined without the power and ease of HANA. Although, for the demonstration last week, we used a smartphone to illustrate the aspect of obtaining real-time sensor data based on the physical actions of the player, an appropriate sensor could easily reside within a suitable wearable. The eventual goal would be to make this as unobtrusive as possible. The data used for generating real-time insight that leads to corrective action taken by a coach/physiotherapist and/or the player comes from a variety of sources – sensors, survey data and video along with previously stored data pertaining to a player’s history. The key is to monitor a player’s relevant activities such that it leads to a personalized fitness regime. This is truly an instance of leveraging the Internet of Things for making the process of managing an athlete’s fitness and health, well,… simple.

And, you might ask what of its ability to scale widely? The answer to that is: this proposed solution can certainly be applied universally. Yes, the concept is easily translatable across a range of sporting activities, and specialized healthcare. As next steps, we are keen to explore many such options, as IRM harnesses the reach of the Internet of Things to enable the provisioning of individualized fitness regimes for athletes enabling them to run simple – their fitness and, ultimately, their sporting lives.

So what’s next?
Well, my next stop is Sydney, Australia, where I will have an opportunity to address a session at the 5th World Congress of Science and Medicine in Cricket on March 25 and 26. It is my hope to also gather meaningful feedback that we can bring back into refining the design of IRM. So if you are in Sydney, I will be happy to meet on the sidelines of this Congress to discuss if you wish.

[This post originally appeared at blogs.saphana.com in a slightly different form.

It can be accessed here: https://blogs.saphana.com/2015/03/23/cafe-innovation-helping-athletes-run-simple-almost-literally/ ]