You perform an IMPORT ALL in STMS but transports are imported in the wrong sequence.

You have a 3 system landscape (or more) and you import to the consolidation system (system that delivers to at least one system – ECQ in transport routes below) with U0 (“Leave Transport Request in Queue for Later Import”). 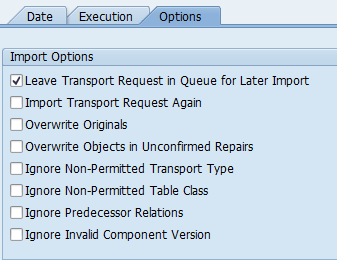 For a definition of ‘F’ in the buffer please see the description below :

F (in buffer only): buffer entry is at a wrong position. A subsequent (implicit) addtobuffer will correct that later. This umode normally only

appears in the buffer of delivery systems when umode 0 has been used.

In the buffer above we see ‘IF in the umode column. The ‘I’ means repeat the import of the transport request from the beginning and is the result of importing with U0. This will be resolved by importing without U0 (“Leave Transport Request in Queue for Later Import”).

For transports that are initial and yet to be imported the ‘I’ comes from an import to the previous system with U0 and will accompany the ‘F’ (in our example an import to ECQ with U0 will deliver to ECP with ‘IF’).

If one checks the sequence of transports prior to the IMPORT ALL you will be under the false impression they are correct. It is only when you check
the import history that you see the sequence was not the sequence you expected.

This is due to the fact that when tp starts the import (after you trigger IMPORT ALL) of transports in the buffer, those transports with ‘F’ in the umode column are all pushed to the bottom of the buffer. This is because those that are without ‘F’ are known to be in the correct sequence and are imported first.

The ‘F’ (in the umode column of the buffer) can ripple from one buffer to the next if not resolved. In our example if there was a fourth system in the landscape and ECP delivered to that system, if you import to ECP (whilst ‘F’ is still in the buffer column) even without the U0 (“Leave Transport Request in Import Queue for Later Import”) it will still deliver to next system with ‘F’ in the umode column.

In order to resolve this situation you should always check the buffer before you make an import all, especially if you are in the habit of importing to any system(s) with the option “Leave Transport Request in Queue for Later Import”.

If you see any transports with ‘F’ then you should resolve this before you make the import all.

In order to resolve the ‘F’ you must follow the steps below :

Please remember the point about the ‘F’ in the umode column being able to ripple. If there is a 4 system landscape (a system that ECP delivers to) and you find that you did not import to ECP with U0 (“Leave Transport Request in Queue for Later Import”), but there is still an ‘F’ in the umode column (of delivery system of ECP) then you will most likely trace it back that you imported to ECQ with U0 and that delivered to ECP with ‘F’. You then imported to ECP (without U0), but that still delivered to the next (delivery) system with ‘F’ because the ‘F’ was not resolved (in ECP). So it is very imported that you do not perform the import whilst the are transports in the buffer with ‘F’ or you will have a rippled affect.

In this wiki we talk about IMPORT ALL, but it should be noted the same can happen for an import subset if the subset contains transports with ‘F’ in the umode column. 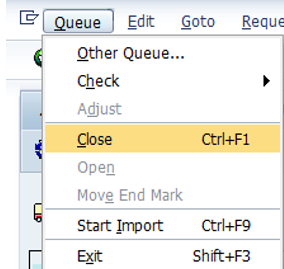 then the result will be the same and those transports with ‘F’ in the umode column of the buffer will be pushed to the bottom.

So bad that some  pictures get lost at css.wdf.sap.corp

Good information thanks for the same but some images are not visible can you please also upload the same screen shots Buffer2.PNG & Buffer4.PNG from

Because the css.wdf.sap.corp link is only accessible to SAP Consultants.

I've changed the images and uploaded new ones. Any issues let me know but you may need to zoom into those two (small) images.