In this blog I want to share my User eXperiences from CeBIT 2015. I’m living 25 km away from the fare ground Hannover. Everyone now would expect that I visit the CeBIT every year. But that’s not true. To be honest it was quite boring the most times I’ve been there in the past cause it’s a consumer fair where companies want to sell their products. I’m more a Techi and hence there are more interesting events for me than CeBIT. I don’t want to see the newest version of software A or the 35th CRM application on the market.

Hence I firstly also this year decided not to visit CeBIT but to stay at home and work for my newest project or to learn something new about HCP or Fiori via the Internet.

But last thursday I saw an invitation to the SAP CeBIT stand at XING. XING is a german business platform for business networking. This invitation came from Helge Sanden who is regularly publishing a newsletter about what’s going on at SAP. Mr. Sanden had organized a guided tour for a maximum of 25 people at the SAP stand. Cause that offer sounded very interesting I shortly decided to go to the CeBIT on Tuesday, the 17th of March.

On tuesday morning I drove to the fair ground by tram and was quite surprised to get a seat. With me some chinese people and some german business men were in the tram. But it was not packed with people.

Let’s explore the SAP stand
When I arrived at the fair ground I immediately went to hall 4 where the SAP has it’s stand. The first thing I saw there was this huge wooden stage. As I learned later it will be given to african refugees after the fair is over. These refugees will build designer furniture from the wood and sell it to earn some money in the foreign country Germany. This is practised sustainability. Congrats for this decision SAP.

After entering the stand I first had a look at the different areas to get a good overall impression. As I expected almost every area showed HANA, HCP, Fiori or something that’s derived from this. 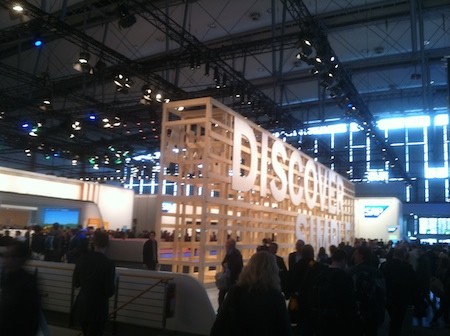 When finished this walk-around a presentation about user experience and what it means for efficiency at work held by Martin Wezowsky started. I already heard and read a lot about this in the last months so I didn’t expect to much news. But I was impressed about the way Mr. Wezowsky presented his vision and thoughts about the importance of UX at work. He reached others than the technical thinking parts of my brain.

Mr. Wezowsky theoretical presentation was followed by another one about UX. Andreas Hauser and Nis Boy Naeve presented the SAP UX strategy and how you can create a benefit in your company with a good UX. They emphasized their statements by some good examples from customers. It was a good and entertaining presentation. 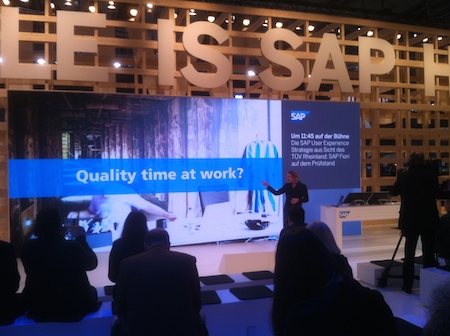 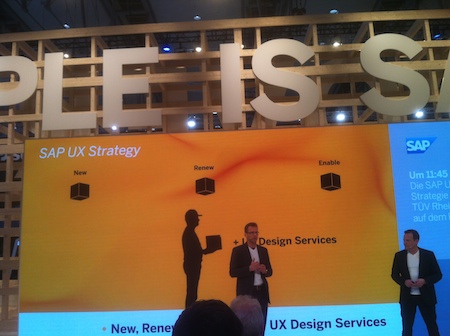 A little time later Rolf Schumann entered the stage. Mr. Schumann is Head of Platform Solutions Group MEE at SAP and showed us in an interesting 3-D Powerpoint presentation how the parts of SAP HANA operate together smoothly and can manage Big Data.

After this quite technical presentation Mr. Schumann gave us an insight in Big Data. For me this was one of the most interesting parts of the day. He told us with some examples from real life that Big Data is relevant to all of us, if we are IT professionals or not. Of course there were some relationships to SAP HANA which for example helped the german soccer team to win the soccer world championship (yeah!!!). 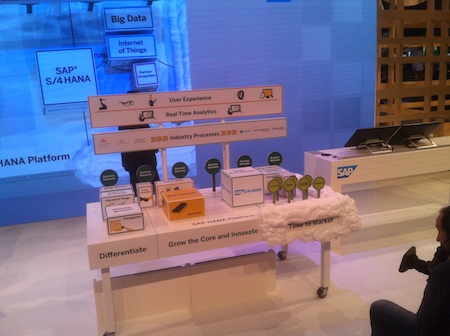 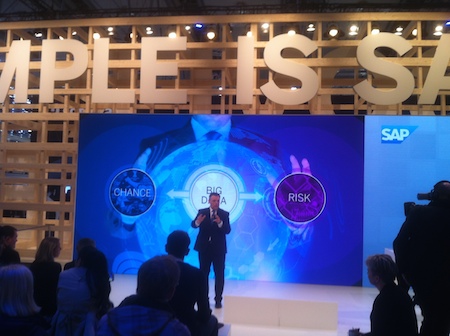 In the afternoon I then had a look at some other companies and got back to the SAP stand at 5 p.m. The guided tour started with an explanation of the installations at the stand which should emphasize the chances that different life areas have through Big Data and of course SAP HANA. There were an agriculture, a sports and an industry installation that were not only nicely presented but also made clear that SAP not only is an IT company for economic processes of industrial enterprises anymore but also influences and has it’s application cases in all fields of life.

At the end of our guided tour we got an introduction about SAP S/4 HANA, the new flagship in the SAP product portfolio. This general introduction was accomplished by a lecture about a use case that was implemented with and by a german logistic company. All in all I got an insight into some parts of the stand that I wouldn’t have got without this guided tour.

Last but not least we, the participants of this guided tour, were invited to stay at the stand and join the SAP stand party in the evening. As every time I join a SAP evening event they offered great food, drinks and music and we had a nice time to do some business networking. Many thanks again to Helge Sanden for organizing this. 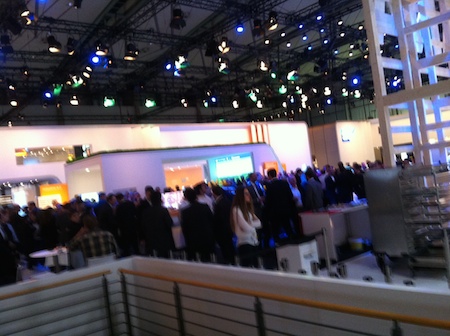 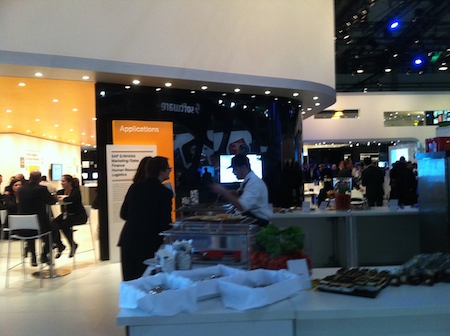 All in all I was very satisfied at the end of the day and probably will come back next year.