“The best part of you is you”: First Student MeetUp with Bill McDermott at CeBIT 2015 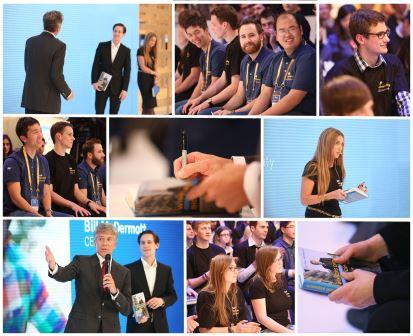 I was thrilled to meet Bill in person; I felt his energy spreading all over the place! He is such an inspirational visionary, with a unique lovely personality…

Two weeks ago we launched our SAP Student MeetUp Jam page. We sent out the Jam invitation to over 800 students in Walldorf. We think that they have an immense potential for creating cool and innovative ideas within SAP. In about one day we had over 450 subscriptions which mean more than the half. So we see that Students at SAP want to explore and engage with SAP’s technology.

To launch the first SAP Student MeetUp event we thought about which could be the best location for it. What could be better than this years’ CeBIT? SAP University Alliances is on-site of the CeBIT, representing the team with many motivated staff, performing the SAP InnoJam and organizing the SAP Student MeetUp.

The first SAP Student MeetUp should be an unique event from Students for Students to get together and collaborate in a cool and inspiring environment. More than 70 students were interested in joining the kick-off “SAP Student MeetUp: Questions to a CEO” and listening to Bill McDermott, CEO of SAP, talking about his book and its content “Winners Dream”.

Ben started with asking about Bill’s first big interview. His answer was a short throw back in time: He remembered that his father took him to the company. Before getting off the car, he looked at his father and said: “Tonight, I will come home with my new badge. I will get this job!!” Bill told us, that he had a feeling, that this was the right day and job for him. He believed in his strength and abilities and knew that he will be able to convince the CEO of the company. And he did.

Furthermore, Ben asked: “If you could give one piece of advice to guide these ambitious young people, what would you tell them?” To cut a long story short, Bill gave the students three main advices to comply with:

The video of the first SAP Student MeetUp with Bill is now available here.