Since the availability of the DMO functionality within the SUM framework at lot of things happened under the hood as well. Beside the Availability of the SAP First Guidance – Migration BW on HANA using the DMO option in SUM (which is updated constantly …)

Especially Oracle RDBMS based Systems which covers the majority of our Customer base need to address with some Performance Improvements right from the beginning to ensure a stable and performant migration to BW on HANA despite it´s sizes or other challenges on the way.

The real durations are the best criteria, but they are only known after the migration of the tables.

ℹ this can improve the downtime up to 50%, due to the more “aggressive” table splitting after the first run and the results in the XML files. During a migration, SUM creates text files with the extension XML which contain the information about the migration duration for each migrated table. The files are created in directory SUM/abap/htdoc/ and are called (create them beforehand, if you want to use the setting from the beginning)

Copy the above-mentioned XML-files directly to  the download folder. The creation of the specific file location in the file SAPup_add.par in directory SUM\abap\bin become obsolete with the current Versions of the SUM Versions 1.0/2.0 (September 2020).

whatever you will find out: You can trust the DMO optimization when it comes to the table splitting. the Algorithm behind is smarter than you think. Overruling this via the manual setup of the file EUCLONEDEFS_ADD.LST is not possible.
In the SAP First Guidance – Migration BW on HANA using the DMO option in SUM is also mentioned, how to use the file SUM/abap/htdoc/UPGANA.XML to optimize the runtime further.

ℹ don´t forget the BW Housekeeping Task before you start the DMO procedure, and don´t underestimate the importance saving time and space! the Blog SAP BW-Performance Tuning through System Tables gives you a good overview about the “waste” you have collected in your BW System. Together with the manual table splitting option, you can take over the tables without content.
SAP First Guidance – BW Housekeeping and BW-PCA

start the tool with the following URL – https://<host>:1129/lmsl/migtool/<SID>/doc/sluigui 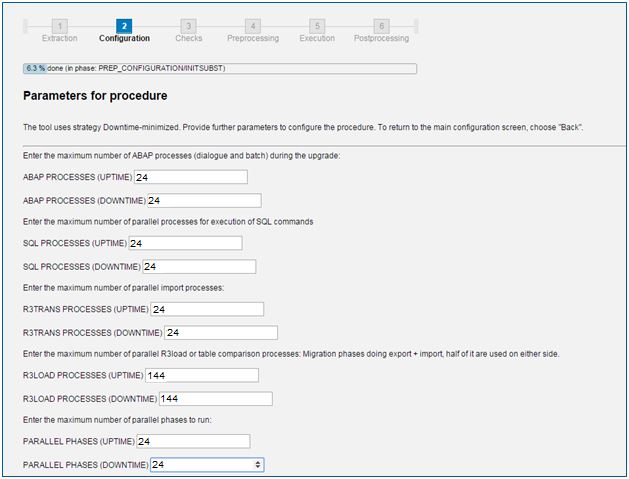 Note 1616401 – Parallelism in the Upgrades, EhPs and Support Packages implementations

❗ Do not use more than 32 R3trans Processes and 24 SQL Processes as maximum for the Start. The R3load Processes can be increased/decreased as you have the resources available. Consider their Values divided by 2: e.g. 96 Export and 96 Import Processes on the AppServer will lead to 192 Processes. If you want to increase the migration performance, only the downtime processes are relevant. As the ABAP DDIC is the almost same size despite the DB size, SQL PROCESSES and PARALLEL PHASES can be even on the default values.

❗ For the configuration phase you can use higher values for the uptime/downtime R3load process to allow a higher split value of the tables. Before the downtime process is starting, use the much lower value for R3load to ensure that you always in a optimal range of CPU/RAM/Network usage. Increasing the R3load step by step (e.g. with the value 20) is more effective, than starting with a high value and reducing them. The little Monitoring tool called “nmon” (e.g. AIX, Linux64, etc.) can be very useful in monitoring Hardware and Network resources during the migration process.

Create a graphical output after the DMO run

Once the files EUMIGRATEUTRUN.LOG and EUMIGRATEDTRUN.LOG are created, you cannot only improve the next DMO run, you can also use these files as input into a graphical representation of the DMO run. With the Release of SUM 1.0 SP14 the extended UI allows you to do realtime monitoring and detailed analysis of existing DMO run´s. See also the Document – SAP First Guidance – Using the new DMO to Migra… | SCN

Example for a DMO run explaining the different phases: 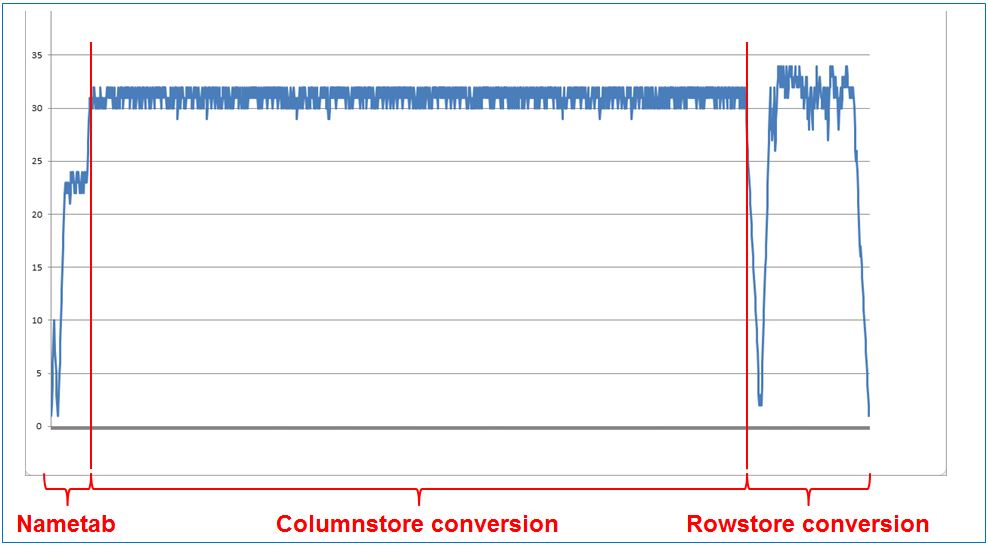 During the update with DMO, the following phases can be long-running:
– EU_CLONE_DT_SIZES
– EU_CLONE_UT_SIZES

In the course of these phases, the system updates the database statistics regarding the usage of space that the tables need on the database. The aim is a better distribution of the tables during the system cloning. Before you start the update, you have the option to suppress these long-running phases using the following procedure:

1. Log on to the host where the Oracle database instance is running. Use ora<dbsid> for UNIX system, or user <sapsid>adm for Windows.

2. Open a command prompt and execute the following commands:

❗ Especially Oracle based RDBMS (which is still the largest SAP customer implementation) need special attention for the DB statistics despite which version you are running. “An old statistic is a dead statistic”. Old could mean 10 seconds or an empty table as well. You can always see in transaction SM50, which table is busy and run an updated statistic with transaction DB20. This can help already a lot, but of course can be time consuming. so have a look to the following SAP Notes as well. Oracle is the RDBMS which need the most attention before you start the DMO process.

❗ Also manually created additional Indexes on the source database can lead to errors in the HANA import described in SAP Note 2007272.There is an Update for the current 7.42 R3load available – See SAP Note 2144285

Don´t go for the SAP Notes title and don´t mix up with manual heterogeneous system copy recommendations. DMO is highly optimized is a way, a custom build migration script or monitor would never reach DMO performance and is not supported in this context anyway.

➕   so for the most of the systems this example of the file SUM/abap/bin/SAPup_add.par would increase the performance a lot.

During the migration to SAP HANA DMO of SUM has to deal with 3 kernel versions. Those are in detail:

During downtime (phase MIG2NDDB_SWITCH) the directories will be switched. After the switch it looks like this:

❗ together with the R3* tools you always exchange the LibDBSL as well for source and target DB. Currently for Kernel 7.42 (which is needed for SAP BW 7.40 SP08 and higher) these latest patches are needed:

Which SUM/DMO Version for which scenario?

One Word about the HANA Version

To keep the additional complexity to minimum, try to stick with the current HANA 1.0 SP12 Revisions, when running the DMO procedure. To find a list of the available SAP HANA Revisions have a look to the

SAP First Guidance – SAP BW on SAP HANA Installation/Systemcopy/HANA Revisions
Never the less some of the mentioned HANA settings here are beneficial, despite of the used SAP HANA Version.

ℹ with the release of SUM 1.0 SP14 and higher, there will also a new and functionality improved and consolidated UI5 for all SUM/DMO procedures (except Dualstacks) be available.

See also the Blog – Upgrade was never been easier … 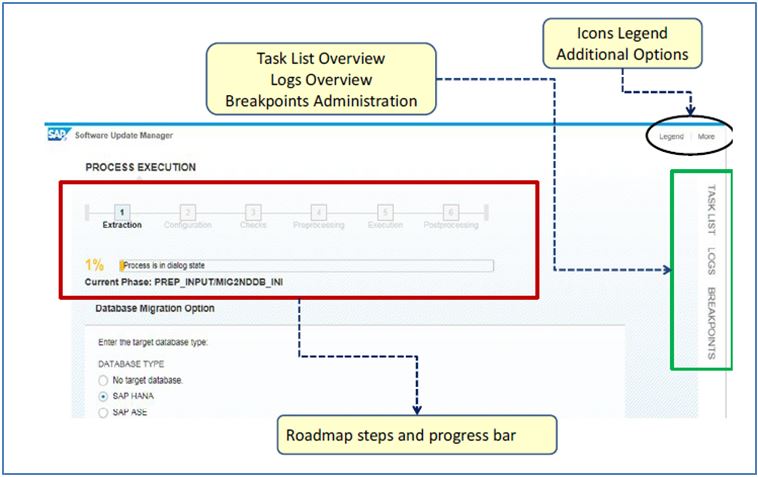