Behind Closed Doors at the Operations Center of the NEC

The room is dark and the tension palpable.

The front wall flickers with monitors and dozens of video feeds. On a central dashboard, sectors of a color-coded map change from green to amber.

Then suddenly, one block turns bright red. A member of the operations team adjusts his headset and leans forward. He knows exactly what he needs to do next. 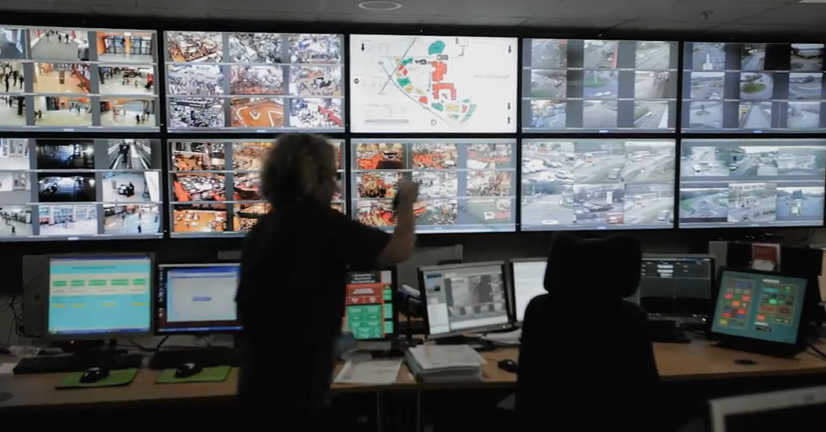 And it’s from here, largely out of sight of the general public, that a small group of men and women help manage 3 million visitors a year.

Welcome to the High-Pressure World of the NEC

To say that the NEC is a busy place would be quite an understatement. Centrally located in Birmingham, the NEC hosts more than 500 events a year – everything from car shows and live concerts to the annual Spring Fair International.

“On a hotspot weekend, we have multiple events all open at the same time,” says Murray Dickson, head of business relationships at the NEC, “and we could have up to 60,000 people attending the site each day.”

Managing the daily ebb and flow of visitors is the job of the operations team. And in addition to overseeing the pedestrian and vehicle traffic in and around the 610-acre site, they also handle security, fire response, and medical emergencies.

“It’s a very pressurized environment,” admits Gary Masters, the security and traffic operations manager at NEC, “particularly when you’re bringing so many people on-site at the same time.”

The numbers are big. But numbers also play a big part in managing the crowds.

The NEC is constantly gathering data on this tide of humanity. Sensors at the main bridge link count all the pedestrians arriving by rail or from the nearby airport. Other systems track every vehicle entering or leaving the site and the total number of cars in the NEC’s various parking lots.

All this information from the various systems is pulled together using the latest version of the SAP BusinessObjects Business Intelligence platform and then presented visually to the operations team on a dashboard.

“The dashboard gives us a consolidated view of both people and vehicles moving off and on the NEC site,” explains Dickson, “and it provides the information we need to make operational decisions very quickly.”

For example, the dashboard displays each of the parking lots in green, amber, or red based on how many spaces are still available. Other indicators show where cars are moving within the complex. And still others let the team know instantly whether the different metrics are rising or falling.

As a result, the team can decide to open additional lots on the fly and dynamically change the variable-message signs to redirect traffic.

It’s all About the Visitor Experience

Few visitors realize just how much the work of the operations team affects their experience at the NEC. But Masters can give you the inside story – like when traffic troubles threatened to disrupt the Paolo Nutini concert last November due to an accident on the surrounding road network.

As the scheduled start of the Scottish singer and songwriter’s show drew near, the NEC staff could see something wasn’t right. “We could tell from the dashboard that the number of visitors we expected hadn’t arrived yet,” says Masters.

This information was quickly relayedto the concert promoters who decided to delay the concert for a short time until more of the fans could get into their seats.

It was a small adjustment to the overall program. But undoubtedly it made a big difference to late-arriving concert-goers who otherwise would have missed Nutini’s opening song –  Scream (Funk My Life Up).

An Even Busier Future Ahead

The NEC staff doesn’t expect things to slow down anytime soon. Resorts World Birmingham, the UK’s first integrated destination leisure complex, is due to open its doors later this year. According to Dickson and Masters, the crowds visiting the NEC could double.

At least with the dashboards, the operations team will be able to see all those people coming.