In this version we mainly focused on bug fixes, smaller round-offs and preparation work for the upcoming Eclipse Mars release.

We added two cool new features to the client version 2.41:

Editing in the Source Comparision Editor

The first feature might be very helpful when working with the same development object in several systems. There are already a few features available for you when working with several ABAP projects connected to different systems. For example you can open a development object very quickly in the other system just by using the context menu in the editor:
Open in Project -> <project-name>

The editor is opened and displays the object from the chosen system.

Very often you not only want to open the object but you also want to compare the code with each other.

The comparision view for the object is opened and explains you what the differences between the two versions. This is the same comparision view that we provide for the local history of objects and the revision history. 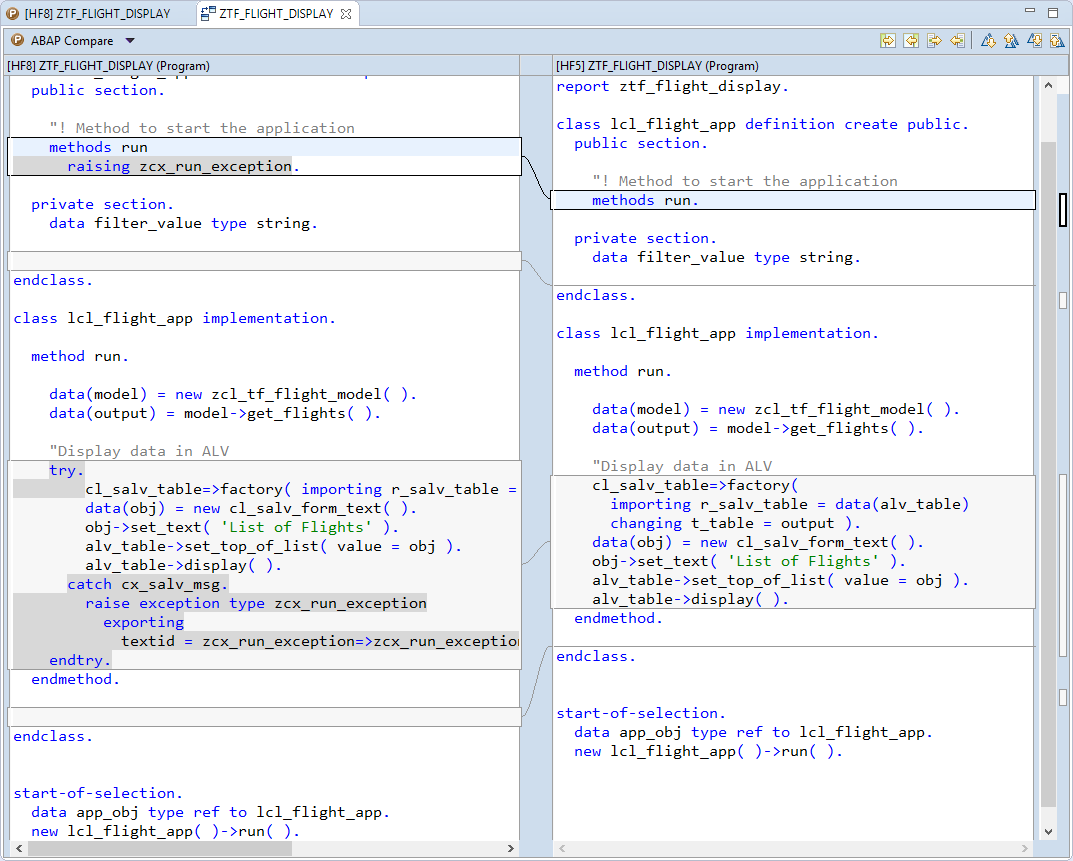 So far nothing new.But now to the new stuff:

With ADT 2.41 it is possible to edit both versions in the comparision view !

This is very helpful in case you want to bring some source code from one system to the other. So just start typing in one of the pages and do your job. Lock Handling and transport handling is the same as in the standard editor.

In addition to the standard editing capabilities the view also provides these buttons here that helps you to take over complete code sections from left to right or vice versa.

This feature is not only working for the classic ABAP development source code objects like classes, reports and function modules. It also works for ther new members of the ABAP family like CDS sources and AMDPs. Here for example you see a screenshots of a CDS view which is editable in two systems in parallel:

The outline view is a very helpful feature in eclipse in general as it gives you a good overview and summary about a development object. For example for classes it shows you the methods, attributes, local classses and so on. The outline view is now also available for CDS views. Because of the rich feature set within the definition of these new views they can get very complex. Therefore we think that the outline can help the developers to get a quick overview about the defined view.

Here you see a screenshot of the new outline view for a typical CDS view: 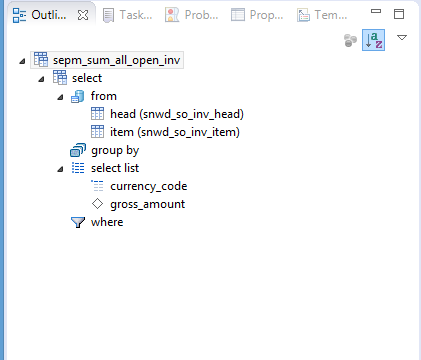 You can very easily see the different sections of the definition like the FROM clause, the SELECT list, GROUP_BY sections and WHERE clauses. The outline view also gives you nice navigation capabilities as the view is linked with the corresponding editor. That means you can position your cursor on an element in the outline view and the corresponding element in the source code editor is marked and vice versa.

This feature (which is also available for all other source code objects) might help in case you are working in the full screen mode where you don’t have the outline view opened.

So that’s it for today. Hope you like the new version of ABAP in Eclipse.