In my previous Blog post (PB 12.6 – What I Expected… What is missing.) I mentioned Support for PB Controls in toolbars. This is a very nice feature (by the way an implementation of that feature exists in PB Ulitmate Suite and also in Advanced Gui Controls sample application which was implemented by some excellent developers – some of them participate in Powerbuilder Developer Center). This feature was not delivered, or to be more accurate, was never delivered working… 😉

The concept was to allow the developer to add also other kind of controls to the tollbar, like a dropdownlistbox or even a userobject… 🙂

That sounded great… But was not in the final announcement of pb 12.6 features, not even in the beta for pb 15.0…

But how that should work?

After that we have to create a new menu object. This should open a sheet similar to the following:

Now, if we right click on untitled0 in our new menu a popup menu shows up with all available actions. 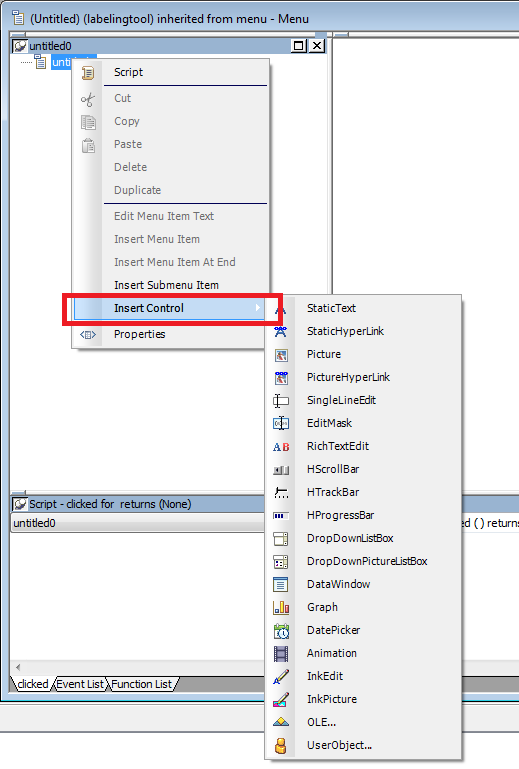 If we look carefully that popup we can see a new option in pb 12.6 that shows a submenu with a list of pb objects… If we choose one, it will be placed as an object to our toolbar! 😕 This works only in the root node of the tree for our menu, and it’s pretty buggy, as it was never completed. 😡 But some work was done, and someone forgot to hide it in PB 12.6! The following screenshot is from pb 12.6 (as all the previous).

So what we have here? If we try to save the menu it’s impossible! 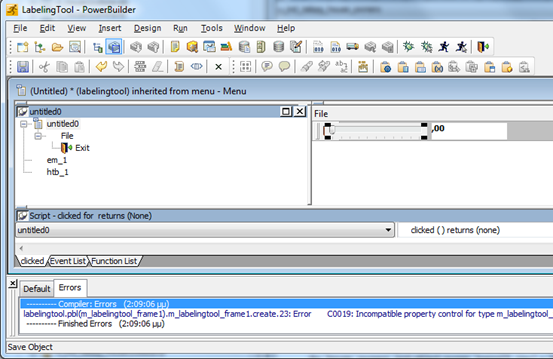 For me it’s certain that a lot of work started and was done right after pb 12.5 was released. I’m sure they had plenty of ideas. And they were motivated. But something stopped them… And it’s a shame. PB 15 with all the expected features, would be a great product… PB 12.6 is inferior to our expectations. Unstable. Buggy… 🙁 And with incomplete functionality, which they should be hidden. 😯

Hope to hear some positive decisions from SAP in the really near future, and to see Powerbuilder and its community to be treated with respect. We all deserve it.

On the spot Andrea!

The look of the PB applications, is highly damaged by the awful old-scholl toolbars with the 16*16 ico/png on them.

I had questioned upper management on this feature ever since we had seen it during the Alpha release phases at the old TechWaves when Sybase we still driving the direction of things.  It was an amazing feature.  Even in the early state.  I remember talking with Dave Fish about the ability to drop a user object with multiple controls in it, onto the toolbar.  We did some testing, and it actually was somewhat successful.  I'm hoping that SAP will see that this is a Powerful feature and chose to fix this so that it is available to be used in production level code in our applications.

I'm thinking if I should open a case for this one... But if this make them simply remove it at all, it is meaningless.I wonder what could happen if somehow an amount of developers asked that feature to be fixed.

The problem with this one is that it's a feature not announced, but delivered and not functioning. As it was delivered is there any way to make them fix it?

You may have a point there.  They have released that as a feature, and did not lock it down.  No matter if it was supposed to be released or not, it's there.  I'm surprised, because in the PB15 beta, it was actually grayed out.  I would be willing to put some kind of unofficial poll together to see what other developers would like to see in the feature!

Description:        Add ability to add user objects to toolbar (in apps, not IDE).

PS: Currently 551 "active" enhancements in the PB queue as of today! That is the old enhancement queue that Sybase basically totally ignored ( ISUG-TECH : Enhancements Process )!