Minimize your downtime of an update

All tools and features for updates offered by SAP are focused on outages related to application. However some of them can even cover all planned outages.
The tools and features that are offered by the SAP standard are available for download in the SL Toolset on the SAP Service Marketplace:

Overview of downtime minimization tools and features of SL Toolset The Software Update Manager (SUM) is the tool for planned updates and upgrades of SAP systems for all software stacks, ABAP stack or Java stack.
But the downtime minimization tools for the stacks are different. In principle two approaches are used:

The clone approach needs a full copy of the productive system but it is very flexible regarding maintenance activities. On a separate clone system also DB or OS updates or migrations are possible.

The downtime minimization tool for Dual-stack only considers the PI dual-stack and uses a lean clone-based concept with copy-back technique..

ABAP applications, especially the ERP system with DB sizes in range of several terabytes. Therefore the SAP standard tools use the in place approach for ABAP systems in general to minimize the planned downtime. The in place approach uses the DB and needs a minimum of additional Hardware. The downtime minimization capabilities of SUM, e.g. nZDM, use a separate DB schema (shadow).

The in-place approach is very comfortable and effective for regular updates. But when you have extended maintenance projects, e.g. an update combined with Unicode conversion or DB migration, a clone approach is needed. SAP offers a so called nZDT service (near zero downtime service) that covers additional outages which can be combined.

nZDM Java is general available and supports patches, SPS, EHP and upgrades. When you want to use nZDM Java for your system, read the SAP Note 2422937 for details. To get further info about nZDM Java, read the following blogs:

The downtime minimization capabilities of SUM are features which can be used in the advanced mode. The following features in advanced mode are possible:

These features support the ABAP stack and can be used for SPS, EHP and Upgrades.
The capabilities in the SUM advanced mode support the ABAP stack products in general, e.g. SAP ERP, SAP SCM, SAP EWM, SAP CRM or SAP BW.
It is available for all common DB. The main SAP Note is 1678565  – “Prerequisites, Terms and Conditions for nZDM/SUM”.
The nZDM feature in SUM is permanently being improved, e.g. regarding the CRR transaction which controls the record and replication functionality of nZDM.
With nZDM in SUM you reduce the overall technical downtime significantly. However, this is not the overall upgrade procedure. The customer specific activities have to be considered as well if you want to minimize the downtime of the whole upgrade process. A main step for reducing the overall business downtime is to integrate customer transports in the SUM procedure. When you activate this feature in the advanced mode of SUM you will be able to import and activate  objects in uptime related to your repository transports. The SUM includes your transports and it can be easily combined with a normal SAP stack implementation. But you can also use this powerful feature for your big customer releases exclusively. With SUM 1.0 SP14 the SUM asks if you want to perform the tool with a stack.xml (SAP stack) or only for customer transport requests. In 2014 and 2015 the import of customer transports was tested in many customer projects. The import of customer transports is fully integrated into Transport Management System, SPAU, SPDD and even Change Request Management system (ChaRM). Since SL Toolset SP14 this feature is available for customers without any restrictions.
Related blogs in SCN are:
Near-Zero Downtime Maintenance for SAP Business Suite Systems

The next level of downtime minimization is the zero downtime maintenance (ZDM). The zero downtime procedure in SUM is called Zero Downtime Option of SUM (ZDO).
ZDO enables upgrades of the ABAP applications without technical downtime and almost no business downtime. ZDO is simply activated through a switch in the existing SUM. Administrators who are familiar with SUM can easily run the zero downtime in SUM after an initial guidance and knowldege transfer.
The ZDO uses an in-place approach, this means minimal DB footprint on the database. This new architecture is based on a sub-system interaction between production sub-system and update sub-system. During the maintenance phase, the upgrade including the import of customer transports is run on the upgrade sub-system. In parallel, end users can continue working on their dialog instances on the start version running on the production sub-system.
In 2015 ZDO was rolled out for pilot projects. The projects were guided by SAP Consulting / Max Attention and supported by SAP development.

With SUM 1.0 SP16 (February 2016) the ZDO procedure is also available for customers on request. For further details see blog: Zero Downtime Option of SUM (ZDO) is “available on request”
The ZDO approach supports Customer Releases, SAP SPS, EHPs and also Upgrades. The main focus is on SAP ERP, SAP CRM and other main Add Ons like SAP EWM or SAP GTS.  As of now ERP and EWM (on SAP NetWeaver) are available on request.

The nZDT is a service offered bySAP. It is a customer specific procedure that is technically a clone approach.
When using the nZDT service, the maintenance is performed on the clone of the production system. All changes are recorded and tran     sferred to the clone afterthe maintenance tasks are completed. During the final downtime, only a few activities are executed, including a switch of the production to the new system (clone).
The nZDT is very flexible regarding planned downtime activities. Database upgrades or migrations, OS migrations or Unicode migrations can be done on the clone in parallel to SAP upgrades as well.
The nZDT is a bigger project and not a tool that is available in the SL Toolset on the SAP Marketplace. In order to get further info, please get in contact with your main SAP contact.

The database migration option (DMO) of SUM offers the combination of system update with the migration to SAP HANA database, making the overall migration process easier and reducing the downtime.

DMO is available as of SUM 1.0 SP 09 and higher, and may even include the Unicode conversion for non-unicode source systems.

The downtime optimized DMO is currently available on request and will further reduce the downtime, see SAP Community blog

Here is a summary of the tools and features that SAP offers to reduce your planned downtime. The key figures about the downtime are based on  experiences are subject to change. 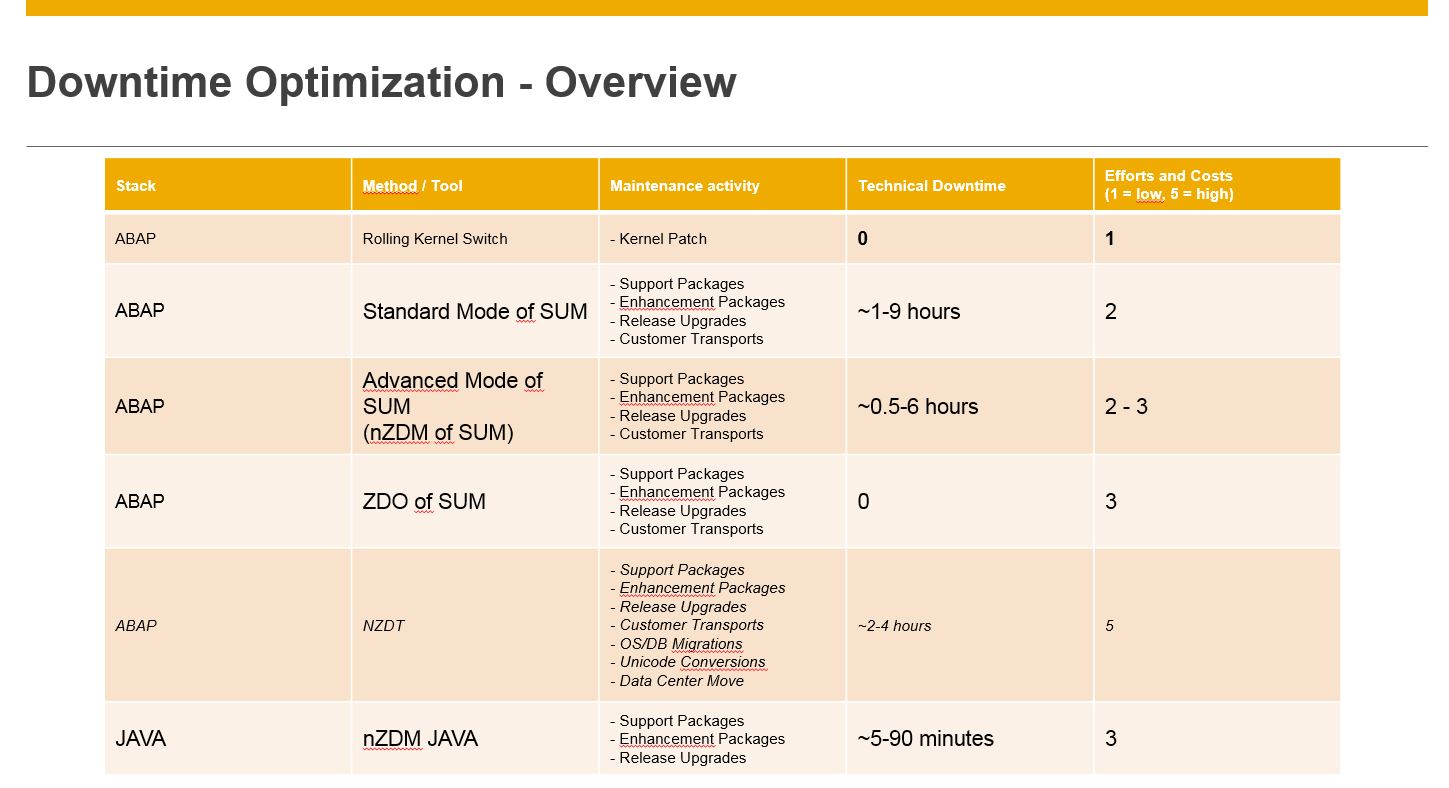