Recently while working on a requirement where I had to add multiple users in BI 4.1 SP04, I sort of missed the Import Wizard and I am sure most of us still do.

Neverthless we now have a new functionality with loads of doubts and not much detailed documentation. So let me jot them down for us here:

This is a good document for starting, so I strongly recommend going through the above document and the comments as well. However I noticed that there were several problems that most of Administrators faced, while adding bulk users. So before we start, I would like to collate a list of things to be careful about:

We would revisit these points again, still its best to know issues first and keep the warning in mind:

Always take backup of CMS database and FileStore before attempting and major changes to the repository.

IMPORTANT POINTS TO BE CAREFUL ABOUT:

LIMITATIONS & HOW TO GO PAST THEM:

A. How to add new groups with description

For this purpose, you CSV should look something like this:

Here’s a snapshot of the CSV for your reference:

Now follow the same method and upload this CSV via the CMC > Users & Groups > Import > User/Group/DBCredentials.

B. How to add Database Credentials to already existing users:

For this purpose, you CSV should look something like this:

Here’s a snapshot of the CSV for your reference:

Now follow the same method and upload this CSV via the CMC > Users & Groups > Import > User/Group/DBCredentials. However this time on Import Page remember to select “User Database Credentials” : 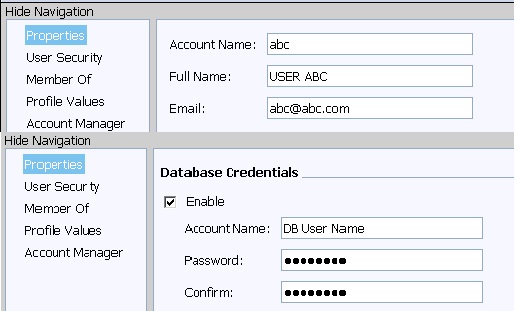 With above I tried to wrap up and put together the missing pieces of the puzzle. Now its time to revisit the points of caution and the problems they cause.

COMMON PROBLEMS CAUSED AND HOW TO DEAL WITH THEM:

The above problem happened because of below reasons:

The above problem happened because of below reason:

With above I sum up this document, I hope you would find it useful and it makes things easier for the Administrators.

Sarvjot, thanks for the detailed information of the content...

Appreciate your response Arun, I am glad you found it helpful.

Great update Sarvjot, thanks for your job.

Thank you for the great explanation and writeup! Can you tell me of a workaround for checking the box "User must change password at next logon"?

Is there any option to add some group to his parent or child group?

Is there a way to create them as named users ??

Hi Sarvjot,
is it possible to import users with "Description" field too?(without profile fields)
Thanks...