On Monday February 9, SAP Silicon Valley hosted Dr. Peter Diamandis, live in Palo Alto, and broadcasted to SAP North America. I was lucky when I arrived in the Dublin Tradewinds room that I was able to sit at one of the seats in the front and got a copy of his book, “Bold.”  Amazon describes this book as a radical, how-to guide for using exponential technologies, moonshot thinking, and crowd-powered tools to create extraordinary wealth while also positively impacting the lives of billions. I was unsure what this meant, but learned very quickly during the motivating talk. 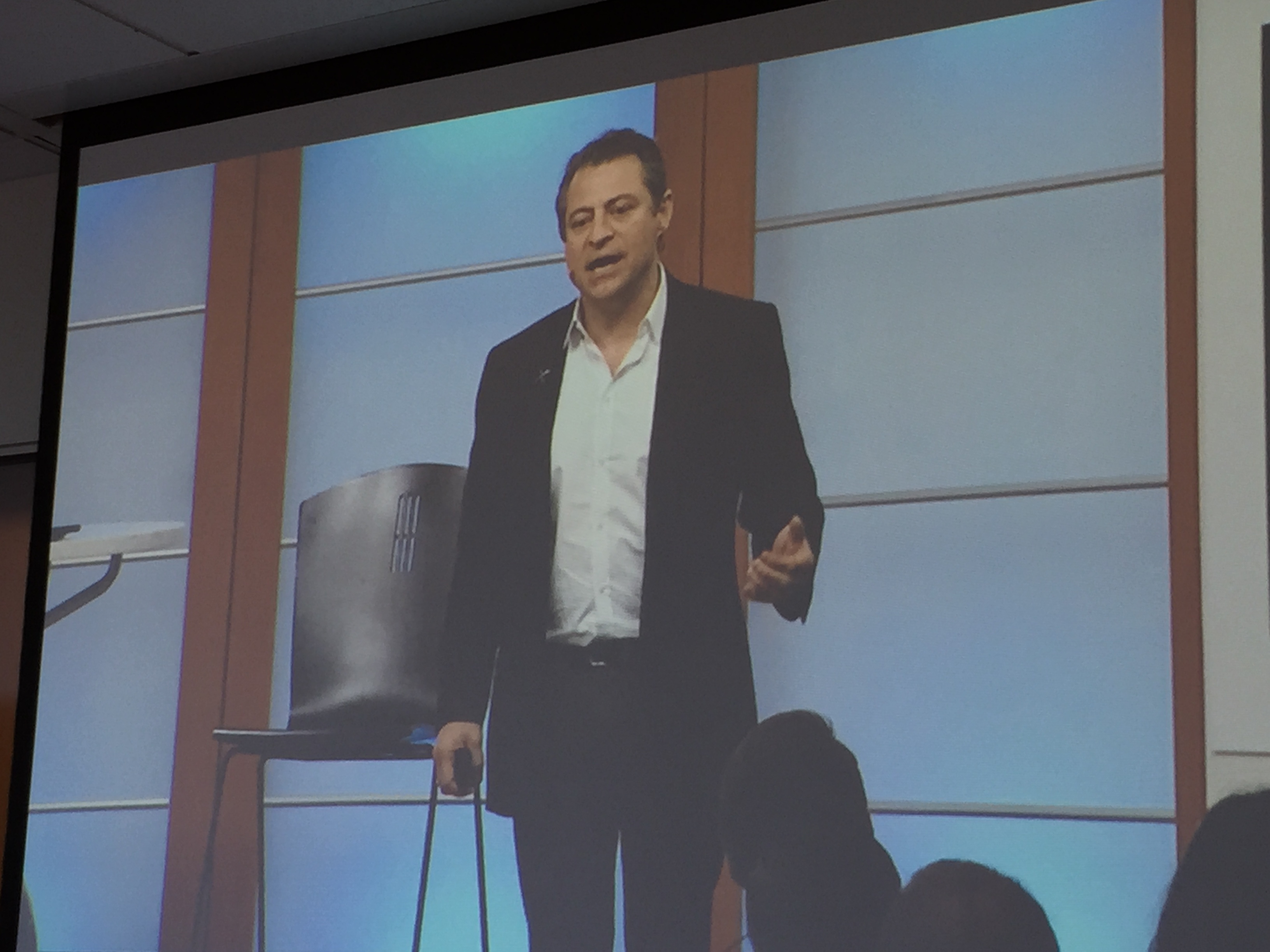 I found Dr. Diamandis a very inspiring speaker. I am really glad I took the time to attend his lecture.  He began his speech telling us all that we have the power and abilities to stop complaining and to solve problems.  He made us believe that we can look at our passions, invest our time and make a difference. He showed us that he did it with his life.  And he asked us why we would not want to do the same with our life.

Diamandis’ premise is that people are linear but we can create exponential change.  Our resources are unlimited.  Technology can allow us to make changes and affect the lives of billions.  Here is how I describe exponential growth: We start off as one cell, then that cell splits into two, and each time it keeps splitting.  Exponential cell growth creates a person.  Well business can have this same type of exponential impact.  He told us to think about Kodak, a company that brought us the camera, film, movies, and processing. In 1988, their global payroll peaked at 145,300 employees. By 1996, their revenues reached $16 billion and the company was worth over $31 billion. They invented the digital camera 20 years before the product hit the market, but they ignored their own invention and did not invest in the product. By 2012 they had declared bankruptcy. In contrast, Instagram had 13 employees, was launched in 2010 and in one year had 10 million users. By 2013 they were up to 100 million users and the growth continues at an exponential rate.   Instagram understood the market, they created a product that reached millions and they were sold to Facebook in 2012 for $1 billion.

Diamandis warned that the world is changing rapidly. That in the mid-50’s you could expect a new company to last for 67 years. Today, a new company may only last 15 years before their product is obsoleted. The speed of wealth and the creation of new ideas are key to survival. “You must disrupt yourself or someone else will,” said Diamandis.

Diamandis mentioned that previously, companies would buy a piece of software and invest in the infrastructure to support it. Today this software is available on the cloud. Companies have the flexibility to gain from the quick innovation and the whole business model of how software is purchased and used is changing. I was happy to hear that he believes in the same vision of the cloud that our SAP leaders have asked us to move towards.

Diamandis talked about some of the amazing venture capitalist projects that he is involved with. He told us about how his children (2 yr. old twins) who he said will never need to learn to drive because by the time they reach driving age everyone will have google-type cars. He even went so far as to say that people would not need to purchase automobiles because we will share cars, which eliminates the need for car insurance. Malls will have more real estate to build stores since they will not need to provide parking for their customer’s autos. We will not even have a need to build houses with garages any longer. Just think, we can all turn our driveways into vegetable beds. He showed us a video of a racecar that he was in, speeding around a track, all powered by a laser light on top of the car. It was honestly amazing.

Dr. Diamandis also talked about something called “moonshot thinking.” This is where you take a big and bold idea, raise funds, and make it happen. Through his XPRIZE foundation, Diamandis has raised money to fund the creation of numerous technologies to better the world. One of which is a reading application. He took this app and a bunch of android tablets to poor third world countries and in 10 weeks, children learned how to read and write. Also, he was able to build a space ship to take civilians into space for a ride and then in 3 weeks, use the same craft to take them back up to space.

Now, he is working with a biometric company whose goal is to help humans live longer. The technology will store all your medical data, take MRI’s and various tests, mine your health data, and come up with what diseases you will most likely get, which can be followed up with preventative drugs/behaviors to give you another 30-40 years of healthy living. He showed us a watch type device that he wore that was recording his blood pressure and temperature and real-time loading his information into a database so that his doctor knows exactly how he is doing. These grand ideas and “moonshot” goals are the way to exponentially grow a company and turn your investment dollars into billions.

His big advice was not to think about growing your company 10% but rather how to make things 10 times bigger. He encouraged us all to think big and to find ways to make our ideas work. He said to have the courage to keep trying every day, to choose to be bothered by things we know are not working, and to recreate the rules if the rules are blocking you from making change.

Here are some of the ways to run projects to allow the fastest change:

The areas where he sees the most change are in healthcare and education. He said that they are going to be massively disruptive to the market due to huge changes in the services available and the products people will buy.

Follow your passion. Help make things change. Encourage some moonshot projects. SAP can do it if we change our culture and allow and accept change. Like he said, either we change or someone else will, and we will be left behind.

A plant begins to grow when a seed is put into the soil, watered and cared for. Dr. Diamandis came to SAP yesterday and he helped plant the seed. Now it is up to each of us to take his ideas to heart, to water and to care for the plant to keep SAP growing. And if we all believe and focus on this passion of exponential growth, we can make our moonshot dreams into reality.

Never doubt that a small group of thoughtful, committed citizens can change the world; indeed, it’s the only thing that ever has.

Marcy, you really captured the spirit and energy of Peter's talk. I've been honored to spend time with him over the last few years and I always leaving more inspired. For people who are interested, you call follow Peter on twitter: @PeterDiamandis