We Don’t Recognize Our Own Biases

During my career, I’ve run a variety of group exercises designed to identify ways we could improve group performance. Typically my teams can identify areas of improvement but believe the challenges are with other people, not themselves. They suffer from the bias blind spot.

The bias blind spot is the cognitive bias of failing to compensate for one’s own cognitive biases. The term was coined by Emily Pronin, a Princeton social psychologist, who showed in a series of experiments that people rate themselves as less vulnerable to biases than the average person. In her words,

Study participants were told how a variety of cognitive biases work at the unconscious level. For example, the researchers explained that the better-than-average bias is the tendency of people to see themselves as above average for positive traits and less than average for negative ones. Despite this explanation, 63% of the participants insisted their self-assessments were accurate. Dilbert captured this sentiment perfectly:

When considering the irrational choices of a stranger, for instance, we are forced to rely on behavioral information; we see their biases from the outside, which allows us to glimpse their systematic thinking errors. However, when assessing our own bad choices, we tend to engage in elaborate introspection. We scrutinize our motivations and search for relevant reasons; we lament our mistakes to therapists and ruminate on the beliefs that led us astray.

The bias blind spot is caused by another cognitive bias – the introspective illusion. People wrongly think they have insight into the cause of their own mental states which leads them to inaccurately predict how they will behave. In fact, further introspection usually makes the situation worse. Despite popular wisdom, the researchers claim “the more we attempt to know ourselves, the less we actually understand.”

Since I have an informal background in psychology, I wrongly assumed I would be less susceptible to the bias blind spot. In fact, increased awareness can cause increased bias. And before you think you’re smarter than that, here’s another unexpected finding: The bias blind spot seems to be even more pronounced with higher intelligence.

Smart people sometimes think they are smarter than they are.

This blog was originally posted on Manage by Walking Around on March 8, 2015. 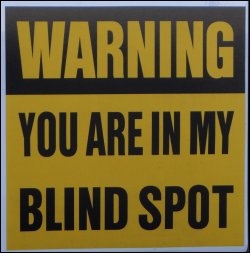