The new 2015 Sustainable Cities Index is hot off the press. Published by Arcadis, an engineering firm in the Netherlands, the index puts 50 cities to the test in three categories: quality of life for people, environmental impact on the planet, and economic performance. The results are telling. Even the most sustainable cities have work to do. 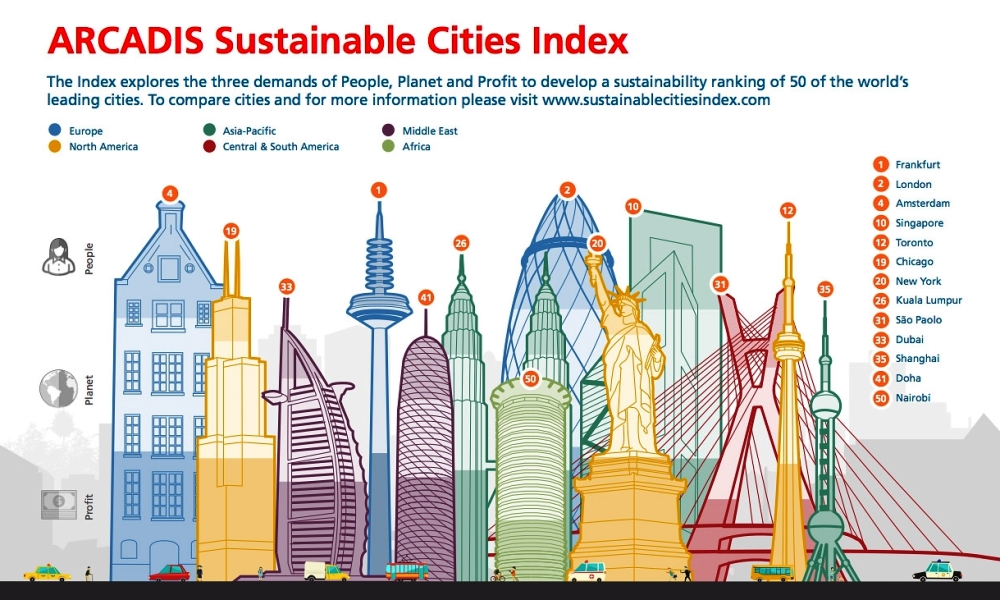 Why should we care? Over 50% of the world’s population is already living in urban areas, and according to the United Nations, that will increase to 66% by 2050. And, the World Bank has issued dire warnings about the impact of climate change which will force masses of people into critically strained urban areas.

There is no perfect city. The current Mayor of London’s 2020 Vision is to make London, number two in the index, the best place to work, live, play, study, invest and do business. But an aging infrastructure, a chronic housing shortage and energy and waste issues stand in the way. Cities ranked at the middle or bottom of the index have even greater problems. São Paulo (31), with 20 million residents, is still experiencing uncontrolled urban growth, while Mumbai (47) is threatened every year by disastrous weather conditions during the monsoons that can destroy thousands of lives in a flash.

According to Sean Patrick O’Brien, global lead, Urban Management and Public Safety at SAP, city governments usually have three strategic goals. They want to grow economically, improve the quality of life, and deliver value for citizens. Many of the cities listed in the sustainability index are already using some form of SAP technology to achieve these goals and become more sustainable in terms of people, planet and profit. Here are some examples.

Cities typically are managed by a number of local authorities that aggregate up so it makes sense to centralize data and services. London comprises a number of boroughs, each governed locally while engaging with municipal entities like the police force and the London transport organization which runs on SAP. Cities must also engage with federal and state agencies, creating complex scenarios when it comes to fiscal matters.

The state of São Paulo runs a centralized data repository on SAP servers across government agencies to proactively uncover tax fraud and better manage public finances which could free up money for better resource management. And of course, cities must be well prepared to protect citizens and property during emergencies. Mumbai has implemented the largest SAP installation in a municipal operation worldwide to centrally engage all organizations during major emergencies such as fire, flooding or terrorist attacks.

“Boston runs SAP HANA to make the city a better place,” says Devin Quirk, Director of Operations, City of Boston, ranked 15. Thanks to analytics tools on mobile devices that empower decision makers and citizens with the right information the city was able to reduce property crime by 55%. For him, the greatest value of technology is less time on bureaucracy and more time on becoming cleaner, safer, and more productive.