The now released feature provides Java public API methods to manage such substitution profiles. In our article we want to show a simple way to use these APIs.

In the Unified Inbox, an end user can create a Substitution Rule for his absence. In order to restrict the type of tasks on which the substitute can work on, he needs to assign one single profile representing those tasks. In BPM a substitution profile consists of several task models. The relationship between the entities is shown in the following figure: 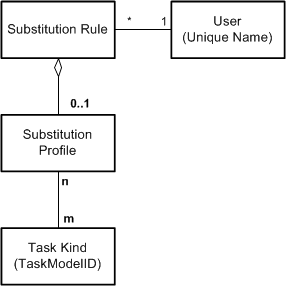 The user (having the role BPEM End User) using the Unified Inbox can only use defined profiles. The definition of the profiles is the responsibility of the administrator (having the role SAP_BPM_SuperAdmin). For more details regarding the permission concept, please refer to Using Substitution Profiles with the BPM API.

To plan the creation of a substitution profile, a list of task models and their ids are required. The Java public API offers a functionality to retrieve the task models; either by name or even all. The search pattern can either contain a fragment of the name of the task model, or it could search for all models by specifying the asterisk ‘*’.

The following example provides the list of task models:

Having the list of TaskModels, for each model its id and name can be accessed:

For both, the search and the invocation of getName(), the logged on user’s locale determines the language of the text. There is also another method where the locale can be provided as explicit parameter.

All operations related to maintenance and retrieval of substitution profiles are provided by the SubstitutionProfileManager. You might have a look at the corresponding Javadoc.

An instance of this manager can be obtained as follows:

Creating a profile happens in a few steps. First, we create a Java instance of SubstitutionProfile by invoking the following method:

The invocation towards the SubstitionProfileManager creates a new Java object of type SubstitutionProfile with the profile key identifying uniquely the profile. The defaultName provides the name shown to the end users in the Unified Inbox. The created profile has assigned the provided task model ids.

In order to provide translations to the provided default name, for each locale required by end users a translated name can be provided:

So far this object profile only exists in Java memory. To persist it finally, it needs to be stored:

Once created, you might want to retrieve the profiles. This can be done by one of the following methods:

If you have no details about the available profiles, you can use the method:

In the most cases you have either its key or its URI by hand. So you could do as follows:

All invocations return instances of SubstitutionProfile. You might inspect them by utilizing the getter methods.

It might happen that already created substitution profiles need to get modified. In our example, we would like to remove a task model and to add a localized name to an existing profile.

We need to retrieve the relevant instance of SubstitutionProfile as described before. Based on this, the modifications can be performed:

In the example above we first remove the task model, second we add the locale ‘IT’ to the localized names and last we store the changed profile.

The deletion works using the profile URI. If it is not at hand, again the profile needs to get retrieved as shown before. With that, the SubstitutionProfileManager can be invoked with the following method:

In case the profile is still in use by a substitution rule, the profile cannot be deleted and thus a BPMIllegalStateException is thrown.

In the previous chapters we described how to use the Java public APIs for retrieving and managing Substitution Profiles. Looking at the usual development-test-productive landscape setup, there could be a need to transport substitution profiles between development, test and production systems. With the set of functionality explained before, you could implement import/export enabling the transport of substitution profiles between different systems.

To export the profiles the idea would be to retrieve all profiles including assigned task models and translated names. This information can then be stored into an exchange file (in any format you would prefer, e.g. xml, txt). The import of the file content can be implemented using the creation/update functionality of the SubstitutionProfileManager.