Hierarchies play an important role in SAP BI reports for data aggregation. Hierarchy enables the user to summarize the data at a desired level in the BI report. Data can be rolled up or down dynamically by the user.

Scenario / Requirement:  There are situations when the developers may need to read the hierarchy to perform a business logic while transforming the data in the data model. Reading the tree structure provided by standard SAP via a code can be cumbersome and may impact data load performance.

Standard SAP BI hierarchy (tree structure) of a geographical hierarchy with three levels may look like:

The H table of this hierarchy in SAP BI will be:

Note: the data below is shown only for illustration, the H table in BW system may have more fields and deals with node ID’s, not node names, this has been done for simplification.

In this case, BW developers often opt to write a code to read the H table of the hierarchy which is often cumbersome as one has to loop through the entire table and all levels to determine the plants in JAPAN.

Similar logic often has to be applied for multiple look ups which often hits the data load performance.

Flatten the tree structure of the hierarchy and store it in a transparent table (example DSO or as a master data). 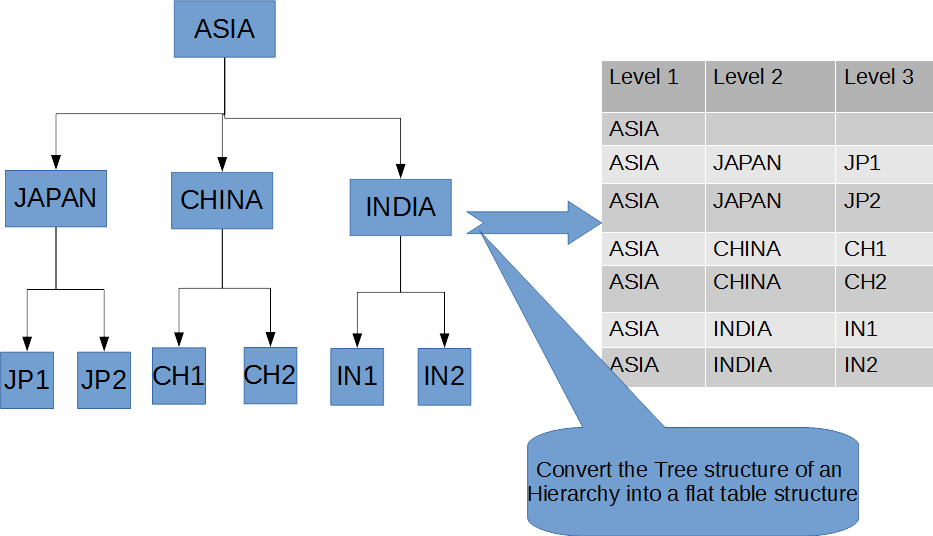 Here is a comparison of a standard SAP BI hierarchy vs a flattened structure of the same data:

Use Standard BW hierarchy when the look and feel of the report is important and main purpose of the hierarchy is to summarize the data, i.e. no business logic requires to transform the data based on the contents of the hierarchy.