2015 will probably be the year of wearables. As part of an innovation project at BTEXX we tried to unmistify the magic behind it and implemented a couple of Smartwatch prototypes based on SAP Portal backend data, because you do not need to wait for S/4HANA to build a fancy SAP Smartwatch App … 😉

We are happy to share our experience in a “Portal on Smartwatch” blog series. Which we would like to divide in 3 parts:

Current research studies, e.g. from Forrester, have shown that end users and enterprises are interested in wearables and are planning to use them or are willing to invest in business cases based on them. Forrester has published the following 5 predictions of wearables:

Source: CIO/Forrester (German Site) or an alternative English blog about the topic

If you are following the smartwatch market, you have probably heard of Pebble. Pebble was successfully funded via the crowd-funding platform Kickstarter in 2012 and till now they have sold over 1 Mio. Smartwatches. Currently they are funding their new edition “Pebble Time”, which will be again the biggest campaign on Kickstarter. On the first day of the campaign they have raised over 5 Mio. dollar alone…

For our development we used the “Pebble Steel” which works as companion watch for Apple iPhones or Android Phones. The watch has a 144 x 168 pixel black and white e-ink display and you can implement the following kind of watch apps:

What I loved during the development/prototyping was the cloud based development environment, without a local setup I was able to develop my first watchface in a couple of minutes and was able to deploy and test the development on the watch. A good start for Pebble developers is the Pebble Developer Site, which offers good tutorials and API documentation.

But now let’s have a look what scenarios/prototypes we have implemented for the Pebble.

Simple UWL (Universal Worklist) watchface implementation, which shows next to the time (it’s still a watch) the total number of open tasks (e.g. 8 tasks) and details of the latest task, in this case a HR time correction request (Clock-in) of Dieter Martens… 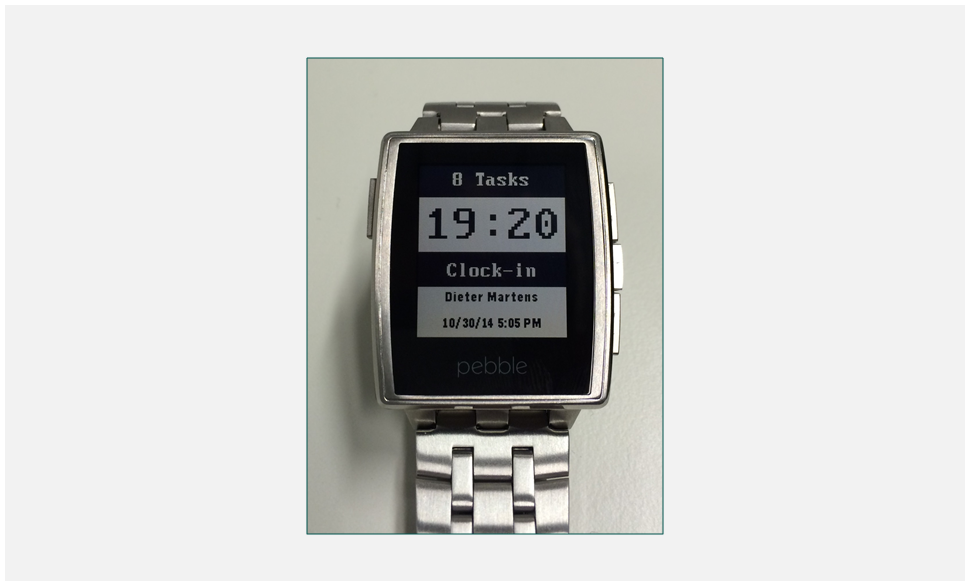 The screens show the migrated watchface to the new SDK 3.0, which supports colors, and two screens of the BTEXX mobilePortal companion app to show the workflow/interaction: 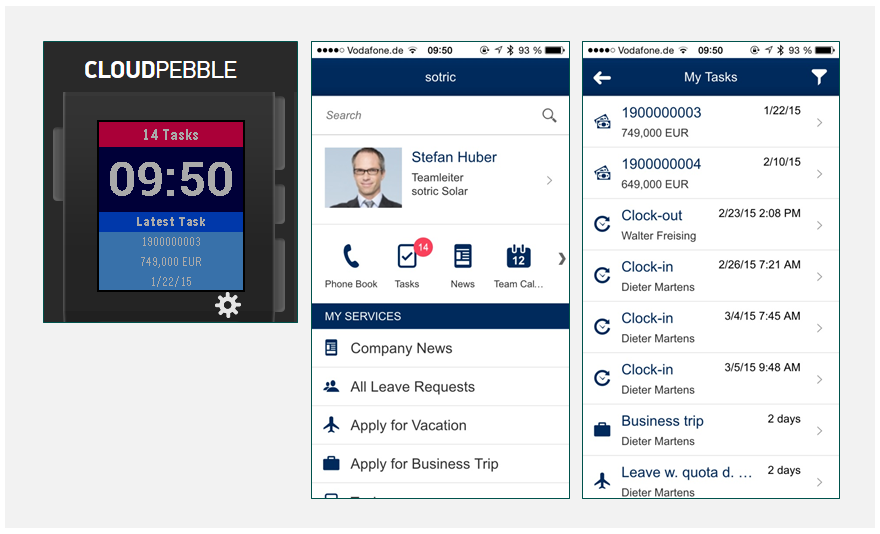 Thanks to the Pebble development team I got an picture how our watchface would look on a real (unpublished) Pebble Time. Good to know that the watchface works also on the real watch 😉 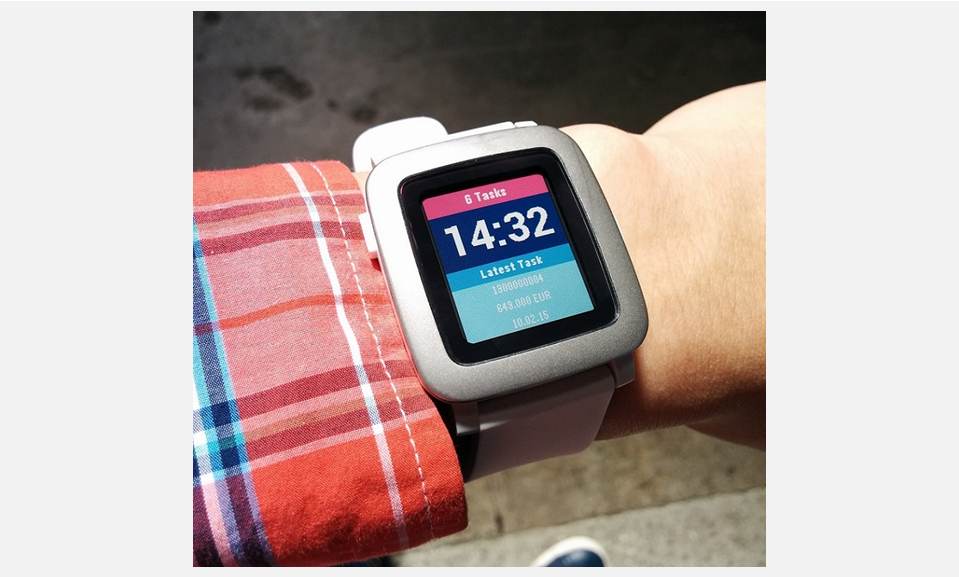 This menu based smartwatch application displays the latest news, tasks and services… The UWL tasks can even be approved/rejected via the watch… 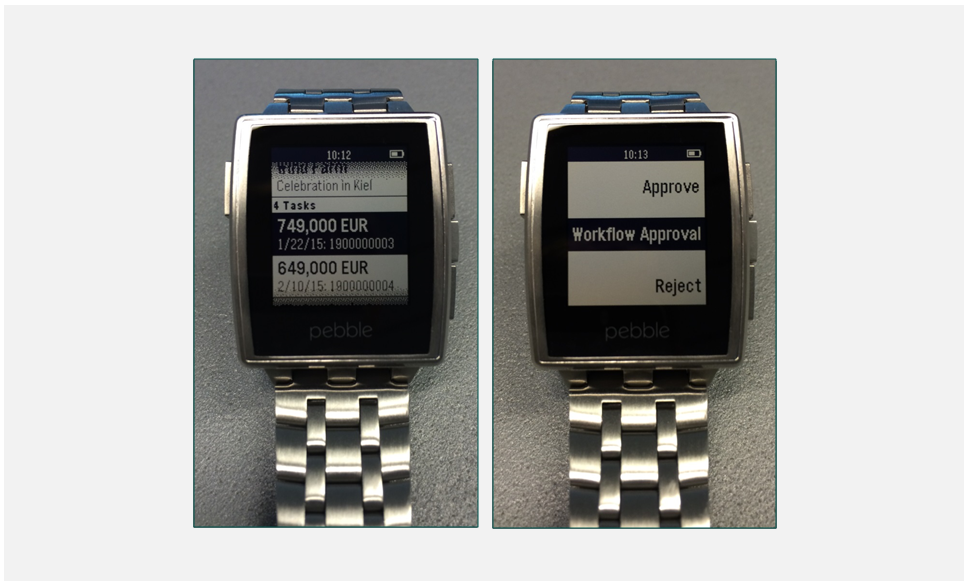 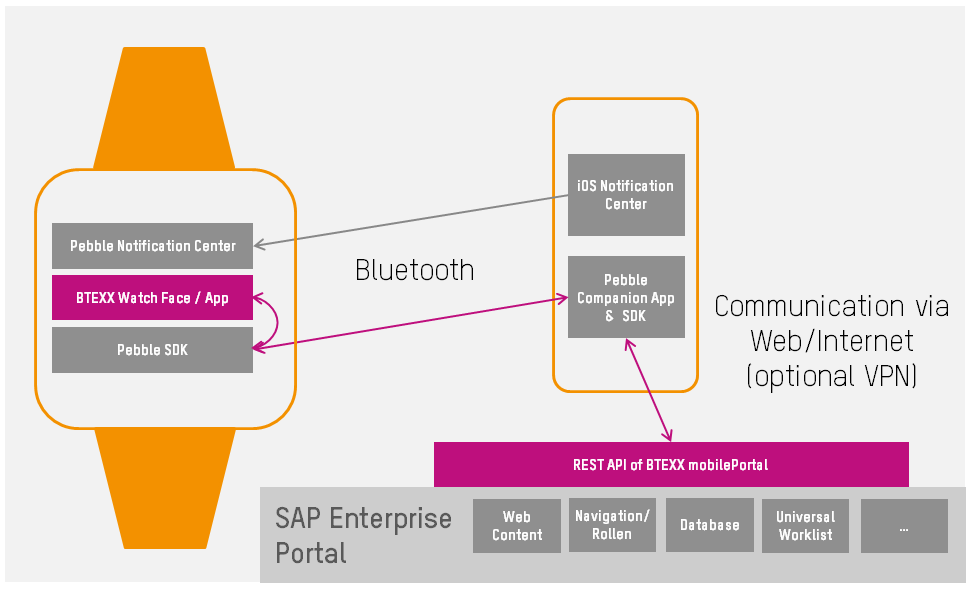 The native watch apps are implemented in C (Layout and Business Logic) and Javascript (Connectivity to the Internet/REST Services) and are running directly on the watch on top of the Pebble SDK.

I hope you found the provided information valuable! I am looking forward to your feedback or questions!

Thanks, the development of this show case was a lot of fun and it was quite interesting to check out some development tools/concepts outside of the classic SAP Enterprise Portal world...

Have a great weekend!

A short update, I just migrated my Pebble Steel UWL watchface to the new Pebble Time SDK 3.0, which enables colors 🙂 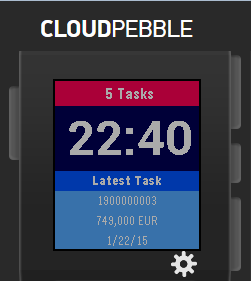 Exactly how much information can I see on the smart watch ?

Can I realistically validate the information being presented on the wearable ?

It looks like you use bluetooth to select a link or notification on the wearable, and have it open on another device (like a smartphone). Have you examined any of the Bluetooth Security issues ?

very good questions, thanks for your interest!

Based on the limited display possibilities of a smartwatch (the Pebble has e.g. 168 x 144 px) in comparision  to a smartphone (the iPhone 5s has e.g. 1136 x 640 px) and Desktop-Monitors (e.g. 1680 x 1050 px), which are still the main frontend for SAP applications, you definitely have to think about the relevant use cases and which content and in which form make's sense on a smartwatch.

From my personal experience (I have the Pebble Steel now for 2 months), the watch is great to display notifications (e.g. mail, directions, messages, threshold valure, etc.) which enables me to start an action, which can be a digital action, e.g. on my watch or on my phone, or on my desktop, or a physical action, e.g. turn left to find the restaurant which I was looking for...

Next to the notifications I find e.g. time sensitive content great. The watch knows e.g. what time it is and that in 15 minutes I have to go to the train station to platform 1 and that I should step into wagon 28 and that my seat has the number 55. This works pretty great on a smartwatch interface and is/was quite valuable for me 😉

The Pebble Watch currently does not support to open an app/link on the smartphone yet (as far as I know). With the 3 colorful screens, which you are probably refering to, I wanted to visualize the following:

1. On my smartwatch tasks watchface I see the total amount of open tasks and 3 attributes of my latest task

2. Based on that I can manually decide to take an action. E.g. checking more details on my phone or desktop

In the upcoming blog about Android Wear (Part 2) we will describe how you can open an app/link on the connected phone via a android wear watch. Android Wear supports that already...

Bluetooth security issues I have not examined in more detail yet, but I will have a look into that.

looking forward to seeing what comes of your example, and this technology in general. Just the fact that Apple is releasing a smartwatch (official from 7 hours ago as I type) is going to put it on the cool kids radar 🙂

As teaser for the upcoming blog posts you will find an smartwatch business overview presentation on our website. You will find it on our mobile page: www.btexx.de/mobile.

Currently the presentation is only available in German, sorry for that. But nevertheless it's worth downloading it for the screens of our Apple Watch and Android Wear prototypes alone 🙂

Hats off to You Sir, Simply Awesome.

With the release of the Apple Watch today, which unfortunately not equals the availability - at least for most of us - I am proud to announce the second part of our smartwatch blog series!

Please have a look at: SAP Portal on Smartwatch – Part 2: Apple Watch