The Uber-Cavs and the J.R. Smith Experience

Here is another quick win installment in my lovetheviz journey!!! As usual you can find this Viz in the following locales!

After watching the Cavs dismantle the Golden State Warriors last night to the tune of 110-99 I decided it was high time to put together a Viz on the journey that has been the Cavs season.  From the glorious return of King James from his personal exile in Miami to the ‘Together’ commercial ( Nike Approved! ) these Cavs had close to a full season even before the NBA actually started playing games.  Or at least it felt like that anyways! Once the season kicked off the Cavs were to say the least not at all glorious in the least.  As you can see from our Viz below they began the season with a -1.5 NetRating.  This effectively means over 100 possessions their opponent would score on average 1.5 points better than our Cavs.

On top of it poor Kevin Love began the season looking like a lost puppy dog on the last train back to So-Cal.  Somewhere along the way though this all changed and the team gelled and began to fulfill the potential all the Twitterverse knew was there.

Our Viz takes us on this journey with a tuned out Column Chart replete with our yearly timeline of Game results and the corresponding Margin of Victory ( MOV ) and 3 Day Moving Average ( MOV ) of the Cavs.  The watershed moments of the year such as Anderson Varajao’s injury and Lebron’s Vacation are marked with black on our chart.  The arrival of Mozgov, Iman, and J.R. along with Lebron’s triumphant return from his vacation are highlighted in Cavs burgundy on our chart.  As of January 13th the Cavs hit the accelerator and have been mowing down opponents to the effect of an 11.1 NetRating since.  Lebron clearly feeling better helped but the rim protection of Mozgov ( opponents shoot only 45% against him at the rim ), the lock down perimeter D of Iman ( 99 DefRating w/him on court ) and of course J.R being J.R. In this case a 53% eFG% and a 16% assist rate.

To top it off Kevin Love woke up as well and the Cavs have a +15.8 NetRating with him on the court.  We shall see if they can keep this up but definitely an impressive showing by our Uber-Cavs!!! 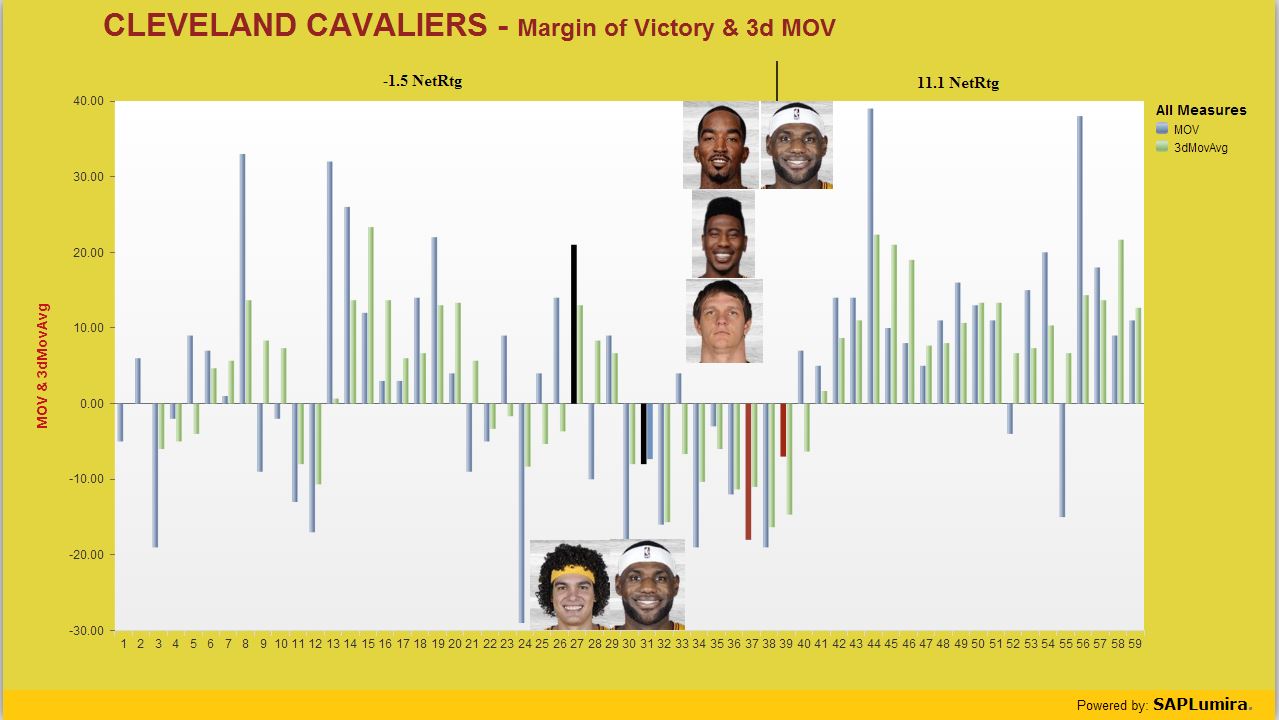