Use mylyn tasks to organize your ABAP in Eclipse workspace

This week Ondrej Seman  wrote a small blog post about a useful feature in Eclipse that helps to organize your daily life as a developer : Using Mylyn in Eclipse (usefull tools) . I want to summarize shortly what is possible with mylyn within the ABAP development perspective.

Mylyn is a task management system that is integrated in the Eclipse tooling.

You can open the Task List view via the top level menu of your eclipse installation: 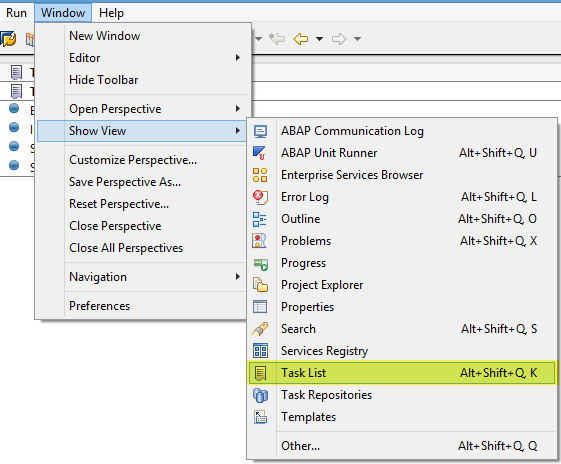 The Task List View is opened and is ready to use. Tasks are grouped in categories (My Development Tasks, My Product Backlog) and can have sub-tasks. You can create local tasks that are only stored on your PC or you can use tasks from a so-called task repository like here in the example from a jira repository. 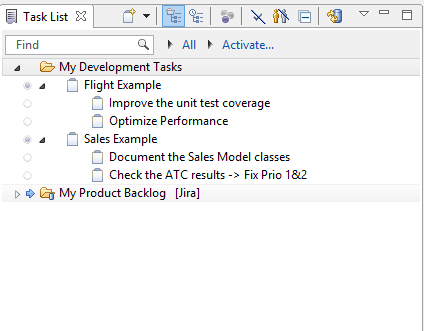 When you double-click on a task in the list an editor comes up to enter the details of the task: 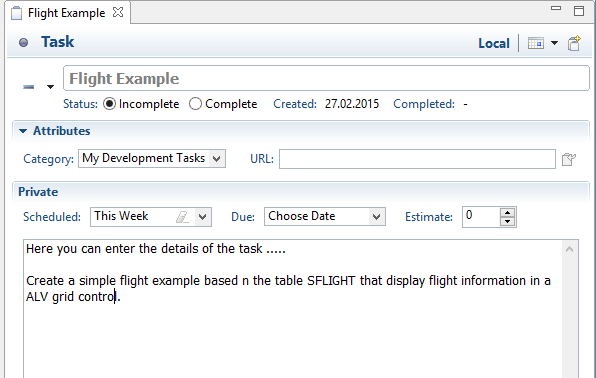 One very beneficial feature of the task management system is the provisioning of a so-called task context. That means that a task automatically tracks which editors are open in the IDE. To benefit from the context handling you first have to activate a task. Activating a task means that from now on you are actively working on the task and the development objects that will be opened are stored in the context of the task. Activating a task is done via the context menu in the Task List: 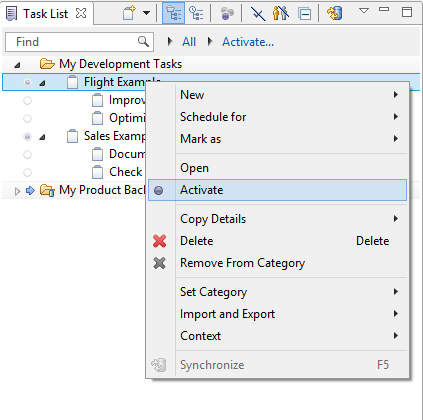 You will see the benefit of the context when you switch between several tasks. Switching a task means that you deactivate one task in the task view and activate another one. What happens now in the IDE is that the editors that are related to task1 are closed and the editors that are releated to the newly activated task are opened.

Mylyn in general provides additonal features that are not available yet for ABAP development like for example the filtering in the project explorer. But we already got feedback from developers that even with the restricted feature set for ABAP the mylyn task management is a very beneficial framework to organize your workspace.

Maybe you give it a try and give us Feedback.

After reading your post I tested the integration of our Jira system into eclipse via mylyn. I have to say that the integration of the Jira tickets together with the attached context is probably the most useful feature I discovered in eclipse so far!

Does JIRA repository allows you to share context with others?

I tried GitHub and I can synchronize tasks with others but list of elements from context is kept as Private Elements on the task and therefore is not synchronized.

Maybe it is good that everyone must create own private context, but I think that there should be a common list of objects related to task development, therefore sharing would be a good idea.

I agree that Mylyn with Jira (or other repository) is a huge feature for the ABAP camp. Would you have any idea if the development objects covered by the HANA tools can be made to save context in a task. So far I can only get AiE contexts into a task.

Hope this clarifies your question.

that means the support for context of Objects in ADT is not supported/planned?

In a stand alone scenario it is working. So if i attach objects to a context it can be recovered by activating the task (objects opens automatically).

Hello, I came across thos blos as I was searching for a integration of ADT an a Task Repository ... best Solution Manager 🙂 Are there thoughts to integrate develompent requests of Charm? Do you think this is possible? We are currently setting up ChaRM and we want to trak the development task there, such hat an ADT integration would be coool! Ideas? Kind Regards Timo John

yes, we are in discussion how we can visualize Change Requests in Eclipse Task List.

Until now no concrete development plans. But posts like this helps a lot  😉

is there any progress on this idea?

Vote++ for a ChaRM Integration into the Eclipse Task List!

I'd like to support the idea and just want to say that I could assist with testing and even blueprinting capabilities.

The JIRA connector still works with Eclipse Mars 4.5 but it's not longer supportet by Atlassian..

I managed to get the Atlassian Jira connector to work in Eclipse Luna but it no longer works in Eclipse Neon - which is a shame. I believe there is a commercial product available that provides a connector for Jira.

I am using the task list since some time and I find it very useful. I have created my own blog describing this feature including sharing through GitHub, then I found your blog - very good by the way.

There is only one thing which I find negative with tasks: sometimes eclipse becomes irresponsive when task is reactivated or new objects are added to the context. I guess it comes from packages loading, like if all referenced packages were read to the Project hierarchy tree.

When I switch off "Link with Editor" and "Focus on Active Task" options it helps, but sometimes it gets on automatically which causes eclipse to suspend (when I wait long long time, it comes back again).

Has anyone experienced that problem?

Yes - I 'm experiencing the same with Eclipse Neon. The problem seems to be associated with opening packages in the project explorer - it feels like by activating a task Mylyn is trying to open all the package folders. Its very frustrating as the Task List feature is very useful but this problem makes it virtually unusable.

Does anyone know of a fix to this?

So as I understood, the problem only exists if the “Link to editor” is active when switching the active task.

@Thomas Fiedler, would it be an idea to temporarily switch off the “Link with editor” feature nside the functionality of the activation of a new task while loading the new editors and afterwards switching it on again when all editors are loaded?

EDIT: We tested this a little bit in our team. When I activate a task, the "Link to editor" button is greyed out and the function is activated automatically. I cannot switch it off until I deactivate the task without activating another one. Activating the "Link to editor" should not be coupled with having a task activated.

After some more testing I found out that the automatic "Link to editor" is implied by the "Focus on task" feature, which can be switched on and off by this button:

If this button is pressed (switched on), you cannot disable the "Link to editor" feature.

Additionally, this "Focus on task" feature is a Mylyn configuration option. If switched off, the automatic sync is gone: 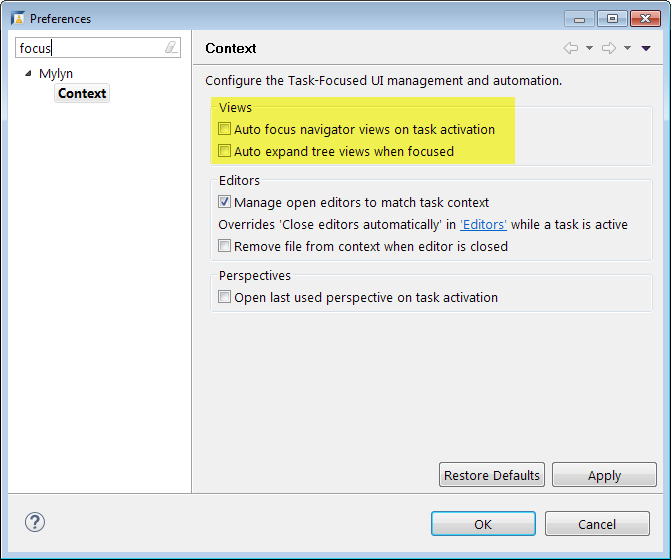 Hope this helps many others, too.

When I tried out switching between tasks to get the different contexts, my eclipse crashed, but I do see the potential!

Good to have heard about mylyn task in eclipse, I'll see how I can benefit from it.

how the future looks like concerning the necessary systems and tools to life an agile development method?

How the solution manager, ADT, abapGit and a Git repo works together?