As part of my ongoing exploration of business evolution, disruption is a key theme and driver of transformation for businesses to stay relevant. I hope you’ll find some of my thoughts and research of interest, as well as my ongoing dialogue with futurist, Thornton May. I look forward to discussing these topics with Thornton and SAP Global Innovation Evangelist, Timo Elliott on March 3, 10 AM EST. I hope you can tune into our live discussion on Digital World with Game-Changers Radio, presented by SAP, or check the link for the audio record of what I’m sure will be a lively discussion on today’s disruptive time and the digital capabilities that businesses need to thrive.

I recently developed the disruptive scenario visual below to show the acceleration and convergence of the digital platform, and the innovation accelerators that build on that platform. The blue curve is the technology progression curve. The progression of technology continues its unabated exponential rise, and leaders can only see so far on the curve. This creates an uncertainty that makes it difficult to understand the implications of technology into the future. 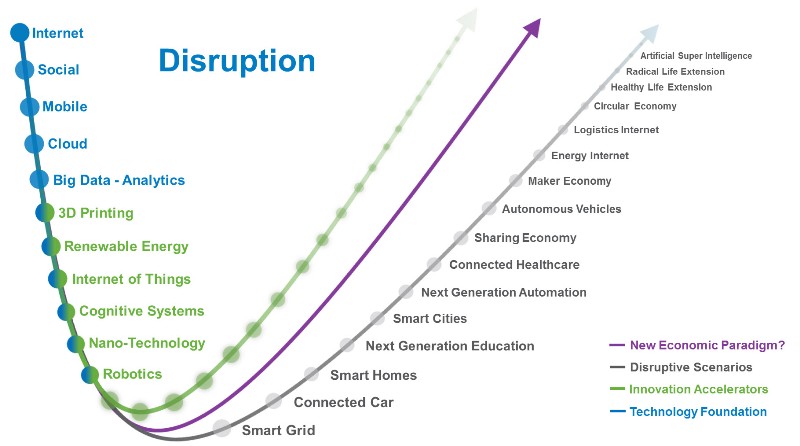 This progression starts with the technology foundation – or the third platform as IDC calls it. In their 10 Predictions For Emerging Technologies In 2015, IDC focuses on the disruptive impact of this third platform. They describe the three waves of computing, the first being the early computing era of mainframes, and a second that encompassed the PC, networking, relational databases, and client server applications. The third wave in IDC’s estimation is our current era, built around cloud computing, social applications, big data, and mobile computing. I had the pleasure of meeting with Frank Gens – IDC’s Chief Research Officer – while in Berlin. Frank believes this third platform will form the basis for the development of new solutions for the next 20 years. Rather than focus on new solutions, my focus is on the coming disruption and my belief that its ramifications are historic– here’s why. In a recent post on A New Economic Paradigm, I reference a recent book written by Jeremy Rifkin where he argues that a third revolution is upon us, and it is fueled by a new general purpose technology platform (GPT). In his book, he describes the economic paradigm shifts of the past, and points to three elements that converge to create a general purpose technology platform to drive the shift: new forms of communication, new forms of energy, and new mechanisms for transport and logistics. The two prior Industrial Revolutions were driven by this GPT phenomenon. In the first Industrial Revolution, it was the steam engine, the printing press, and the railroad. In the second, it was electricity, the telephone and the car. Rifkin believes a powerful third revolution platform is emerging to drive an economic paradigm shift in the next 40 years. The three components of this third revolution platform in his estimation are the Internet (communication), renewable energy, autonomous vehicles and the Internet of Things.

Frank: The intent with this disruption graphic is to get leaders to start thinking about the impact of these scenarios, sooner rather than later, and to begin to understand opportunities, risks, and potential responses. The discussion therefore is one of scenario thinking, response generation through iterative cycles, and rapid experimentation. What are your thoughts on the visual and if I am missing anything in terms of disruption that you are seeing, or innovation accelerators that I am not seeing?

Frank: When you look at disruptive scenarios like the connected car, the smart home, or connected healthcare, it is clear that we are shifting from a vertically oriented, value chain world, to a horizontal ecosystem world. I believe firm-centric thinking is a major obstacle for companies that must shift to an ecosystem thinking paradigm. What are your thoughts on this shift, and are government and business ready for this?

Thornton: The paradox is that while ‘things are becoming connected’, humans are not. Americans now eat more than half of their meals alone. When they convene at communal meals such as Thanksgiving many ‘thought to be connected’ have trouble connecting conversationally with other humans. This bodes poorly for the kinds of knees-under-the-table collaboration that gives way to real breakthroughs.

Please share your thoughts on disruption and its impact on business evolution. I hope you will tune into our live discussion on Digital World with Game-Changers Radio, presented by SAP on March 3 and join TCS’ microforum discussion on the Internet of Things at this year’s SAPPHIRE NOW, May 5-7.