You ever hear those stories about Twins who can read each others thoughts? Know instinctively what the other is up to even when they may be a thousand miles away? There is that exact set of Twins in the NBA and both play for the Phoenix Suns in sunny Arizona.  I did a quick Viz over the last couple days to get a look at how the Suns performed in instances when both Morris twins were on court, one individually, or neither one.  This is that write up and the associated Viz.

Both the Morris twins are technically identical but based on Stats and the eye test Markieff has the better numbers and overall stats.  This is reflected in the 2014-2015 Phoenix Suns NetRating of +6.41 ( 962 minutes ) when he is on the court by himself.  Marcus year to date has had a -2.83 ( 432 minutes ) when he is on the court in solo scenarios.  In the 459 combined minutes they are on the court together the Suns have a +6.57 NetRating!!! So over 100 possessions with both Morris Twins on court the Suns will be expected to be 6.57 points better than their opponents.  When both Morris’ are chillin on the bench the poor Suns have a NetRating of -11.57 over a smallish 93 minute sample size.

In the end while neither Morris twin projects to be an NBA All Star they are clear glue guys who make their shots, defend, and keep the high pace Suns on track.  With Goran Dragic recently being traded to the Heatles will be interesting to see how much additional time on court, leadership, and role either one or both will take on. 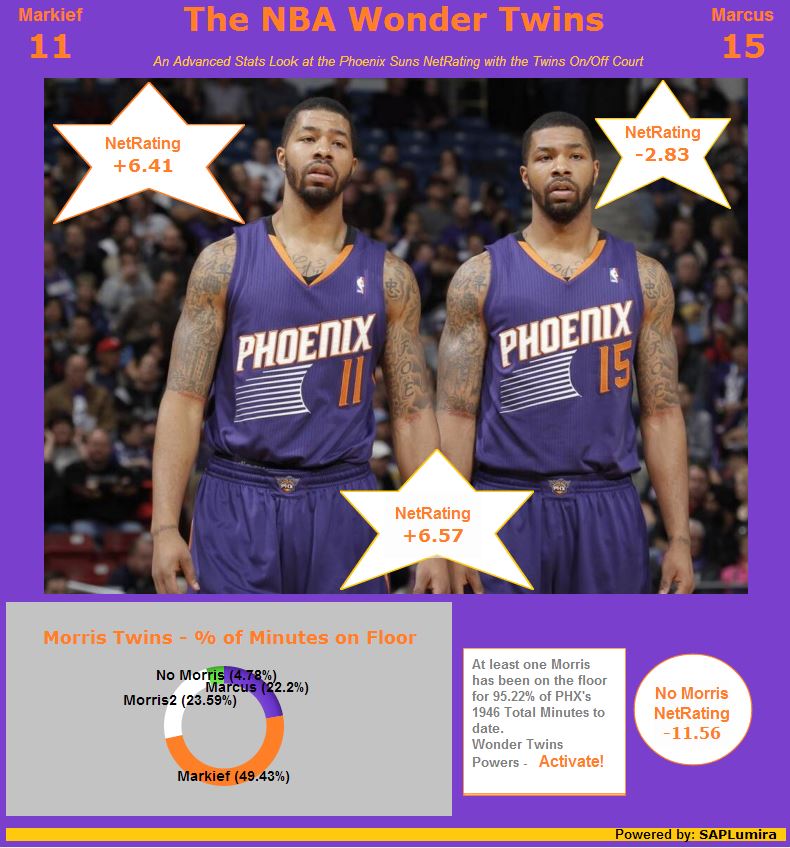