The NBA Pace & Space All Stars

For anyone who wants to follow this info or any of my other stuff this one is posted in the following locations:

For our analysis on this effort I wanted to take a look at the concept of Pace & Space in the NBA.  Pace & Space is an offshoot of the advanced analytics metrics in the NBA and popularized by Daryl Morey who is one of the Godfathers of analytics in the NBA and co-founded the Sloan Sports and Analytics conference.  Note: I am actually older than Daryl but  an icon and doing some great stuff now as the General Manager of the Houston Rockets.  So if you are an Analytics fan you need to be a fan of Daryl! 🙂

So what is Pace & Space?

In short the concept is to utilize your basketball skills of pace, dribbiling, passing, and then shooting to maximize your potential on the court.  This means taking the highest efficiency shots and doing so as quickly as makes sense.  In the NBA this means an emphasis on the short field goals ( Less than 0-5 Feet ) or 3 Pointers ( Past 23 feet 9 inches ).  This doesn’t mean that a team can’t be effective if they don’t play with Pace and Space as let’s face it – everyone has different skills and not all teams are built to play in this manner.  But for the average NBA Team playing smarter on offense means playing in this manner and on defense focusing on stopping teams playing in this manner. 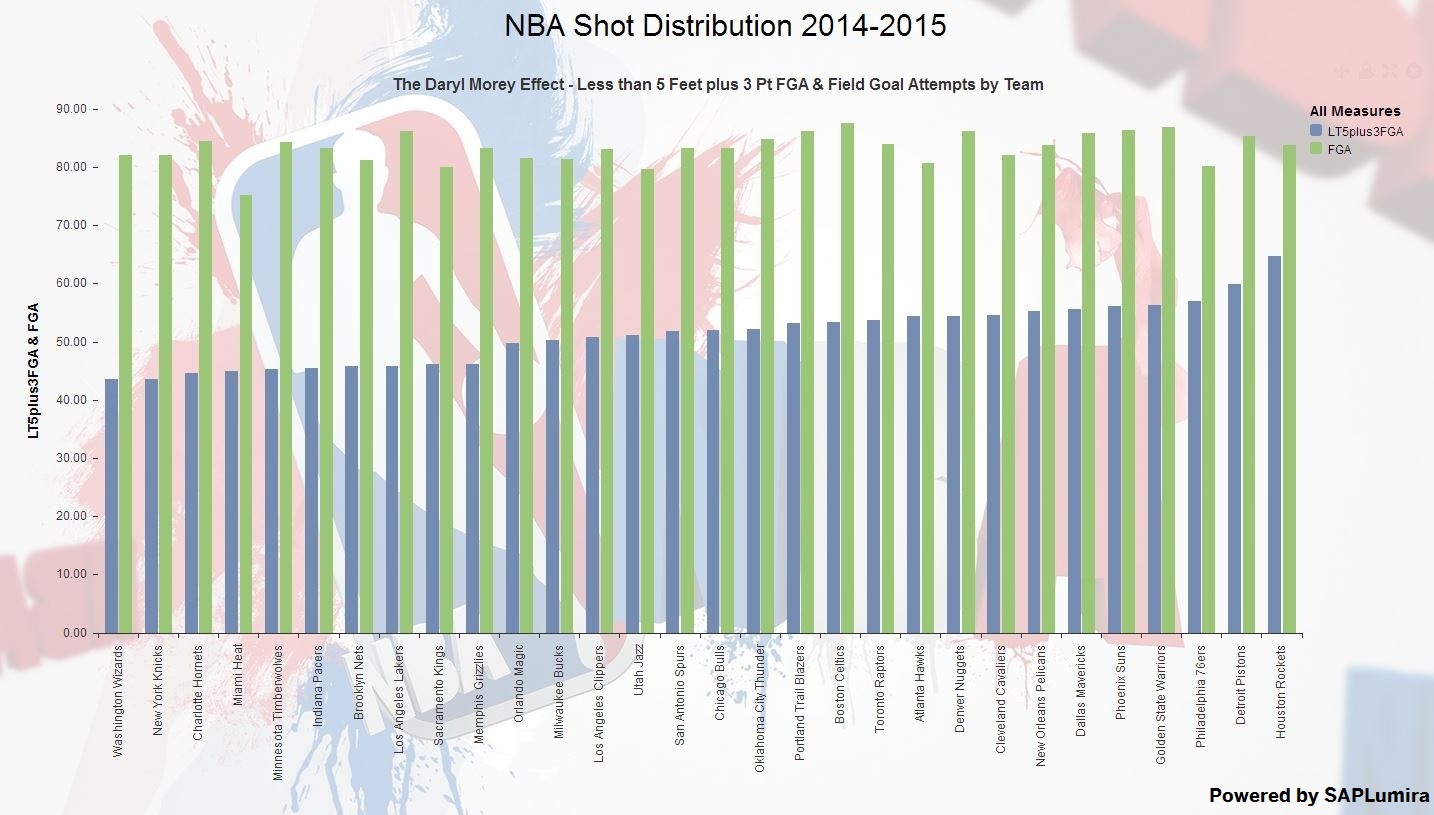 – A nice Viz that shows based on Offensive Rating ( Y Axis ) and Pace Adjusted Smart Shots ( X Axis / Less than 5ft FGA’s and 3 Pt FGA’s ) which teams play in which manner.  As you can see Daryl and the Houston Rockets are in the ‘All Star’ camp as the Pellies, Mavs, Suns, Hawks, and Raptors.  If the 76’ers ever figure out how to shoot they will also be in the All Star camp!!! But for right now they need to work on the finishing and scoring as clearly have the pace factor and shot types down to succeed.

Note: I did this graphic during NBA All Star break and preceding the NBA Trade Deadline.  Since then given the number of trades we expect to see changes moving forward.  IE Philly traded Michael Carter Williams ( MCW ) to the Bucks and given he can’t shoot if they replace his poor shots with some better shots then maybe the 76ers move up the value chaing! He is a great defender and good at some of the other point guard duties but right now NOT a shooter. 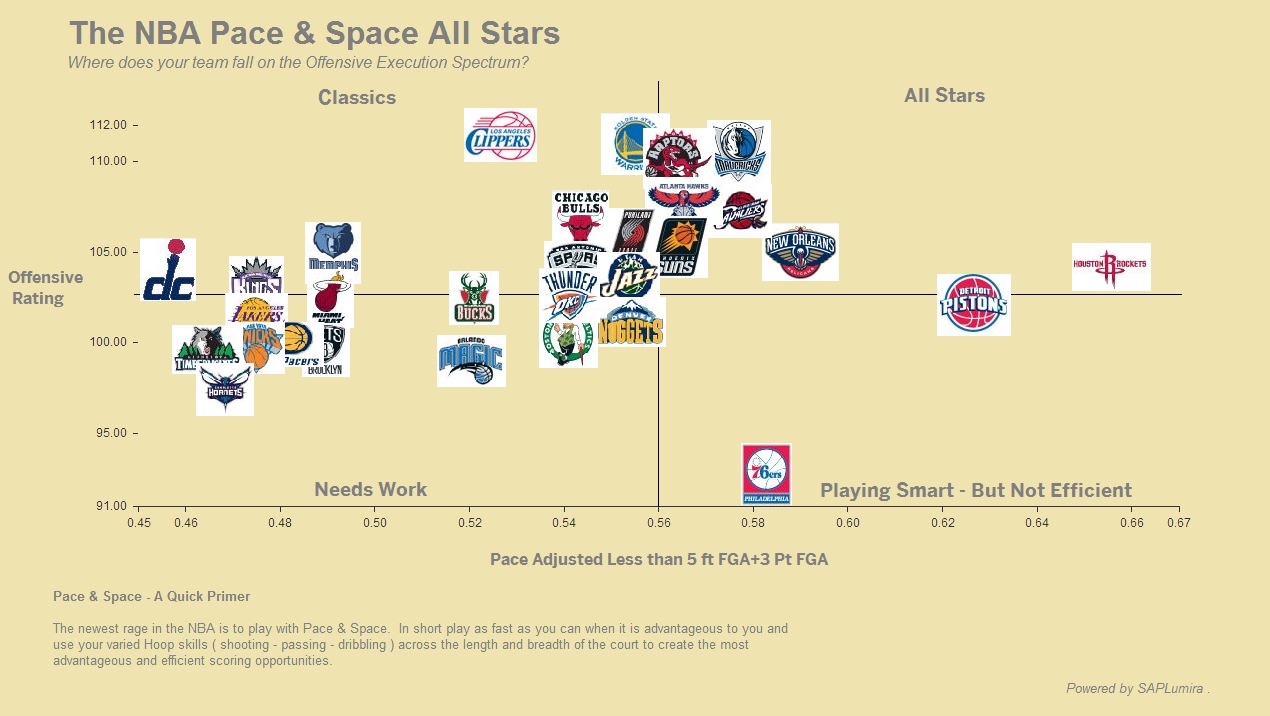 Just another way to cut it up by looking at which teams shoot way too many mid-range Jump Shots.  AKA The not so smart shots!!!! 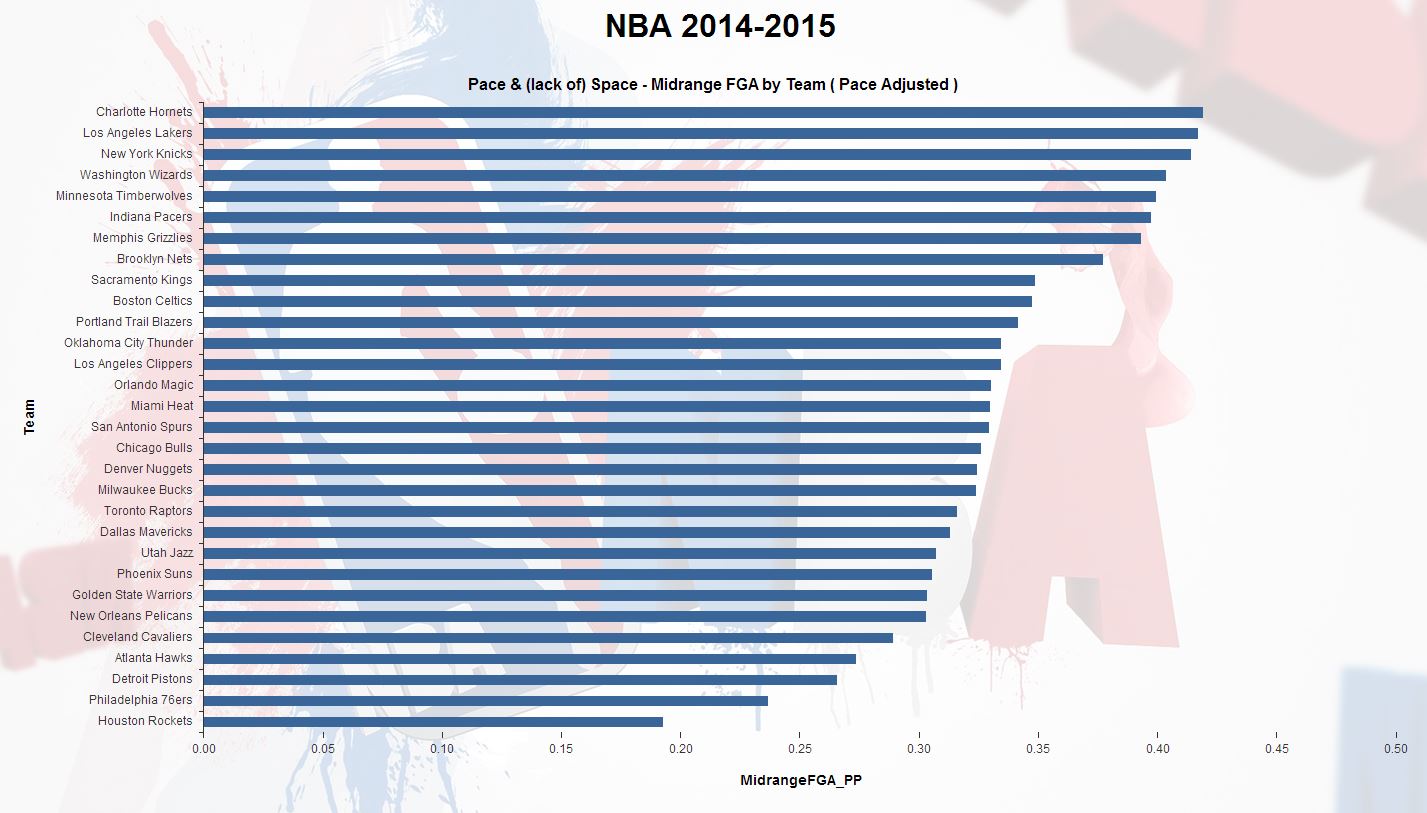