Beware The Stifle Tower – Rim Protection Analysis In The NBA

Here is a quick analysis with data pulled from NBA.com/stats on the importance of Rim protection in the NBA and some of the best shot blockers and influencers this year in the League.

For quick reference to look up some related postings:

For our fist Viz is a breakdown of NBA Defensive Rating by Team ( Y Axis ) and Opponents Field Goal Percentage at Rim ( X Axis ).  Opponents Field Goal Percentage at Rim is a great stat as it incorporates not just blocked shots but the even more important factor of being able to influence the shot at the rim.  In today’s NBA teams are focused primarily on the highest percentage and most efficient shots which are the 2 point shot at the Rim within 0-5 Feet or 3 Point Shots ( preferably catch and shoot ).  If you as a team are capable of protecting the rim effectively you can give yourself a clear heads up on the Defensive end and make your defensive presence known.  If you review our Viz below there is a clear correlation as the better teams at Rim Protection are clearly on average stronger on defense.  There are a few surprising anamolies like Atlanta Hawks but outside of that the trending is clear.  Feel free to calculate the correlation coefficient in Excel or otherwise if anyone gets bored! 😉

Opponents Field Goal Percentage at Rim and Defensive Rating By Team ( Note: This isn’t in the Cloud as had to play with the graphics outside of Lumira )

Now that we have established the importance of rim protection let’s look a little deeper at the individual players who are able to drive rim protections for teams.   The naming of this Blog post may not be familiar to you but is named for the current NBA leader in lowest Opponents Field Goal Percentage at the rim – Rudy Gobert ( aka the Stifle Tower ).  A French NBA player now playing for the Utah Jazz.  I got the opportunity in NYC at the NBA All Star Weekend to witness his skills first hand in the BBVA Rising Stars Challenge ( AKA the Rookie vs Sophmore Game ).  The kid is young but is a BEAST! As he gains experience he will be a dominant defensive presence. For a second year player now averaging only 20 minutes a night to have such a great defensive profile bodes well for the future.  Now only if my Orlando Magic could find some way to acquire him!!!

Check out some of the highlights and 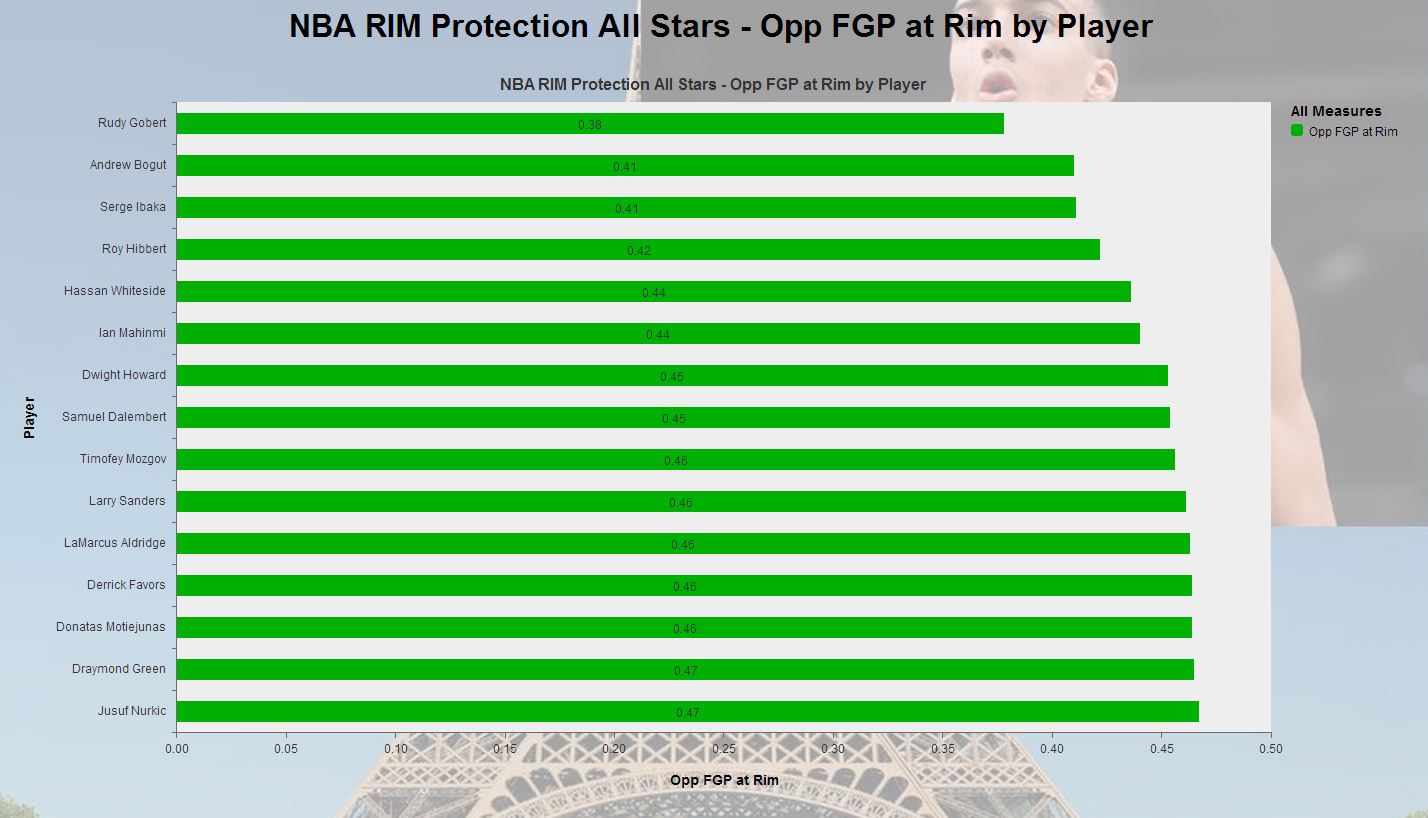