Enterprise Portal vs NWBC for ESS/MSS Services on EHP7

I have been meaning to write this article for some time, but got busy with Year-End and other client projects and am finally getting back around to this topic. Last year, I led an internal project to implement a brand new Enhancement Pack 7 IDES system from an Enhancement Pack 5 IDES system. For those of you who are not aware, an IDES system is a sandbox system that SAP provides (Sometimes at a cost depending upon your relationship with SAP) that comes Pre-Configured and full of test data (HCM Employee data for example). SAP does not recommend patching or upgrading IDES system so we decided to go ahead and do a fresh install of a new EHP7 system rather than trying to upgrade the old one. This would give us a completely vanilla SAP system on the latest version for us to use at our disposal.

The primary purpose of this system is for our consultants to be able to do one of the following:

As a result of being a consulting company and implementing an IDES sandbox rather than a typical setup of a development, testing, & production environment like an end client would, we decided to go ahead and implement both NetWeaver Business Client (NWBC HTML) as well as an Enterprise Portal in order to use Employee-Self-Service & Manager-Self-Service functionality. The thought process behind this was that we wanted to be able to demo and configure both technologies so that we have maximum flexibility and to showcase the differences as necessary. Typically, you would only have one or the other, but in this circumstance we went ahead and implemented both and so I had a great opportunity to directly compare and contrast my unique experience and perspective during the process.

The overall timeline of the technical upgrade took 2 weeks in order to get everything up and running with the new system. This included migrating transports over from the old system to the new system and getting the portal all setup. We did not move any configuration transports due to the possibility of table structure changes made by SAP that are not compatible from old versions to the new one (The EHP7 system was at a higher support pack level, so this was on a enhancement pack and support pack update). This also applied to any “repair” transports that contained changes for OSS Notes, User-Exits, & BADIs – we did not move those over to the new system due to the same concern. Our basis team was very helpful and was able to move the transports over easily.

Once the new system was up and running, I was able to jump in right away and start testing the services. There was no need to activate business functions using SFW5, create configuration in the IMG, or activate services in SICF since it was a Pre-Configured IDES system and most of the initial functionality that I cared about was already active. I simply found a test employee/manager (They keep the same PERNRs, Org Structure, & PA Data from the old IDES system) and setup my ID on IT105 Subtype 0001 and I could begin testing.

For NWBC, the only setup required was going to transaction PFCG and copying a standard role (I used SAP_EMPLOYEE_ESS_WDA_3 for ESS services & I used SAP_MANAGER_MSS_SR_NWBC_3 for MSS services) to a custom role. I added/removed applications that I was/wasn’t interested in and assigned the two custom roles to my ID via transaction SU01 since I had SAP_ALL access in this system.

As soon as I launched transaction NWBC or went to the URL for NWBC and logged in, it worked great and many of the services were working right off the bat. I did have to make minor configuration changes such as updating the dates for the benefits open enrollment period, or updating the salary statement to point to the correct form (Basis already configured ADS) but that was pretty much it on the NWBC side.

Here is the standard look of NWBC with the Corbu theme when I logged in after assigning the two custom roles to myself. 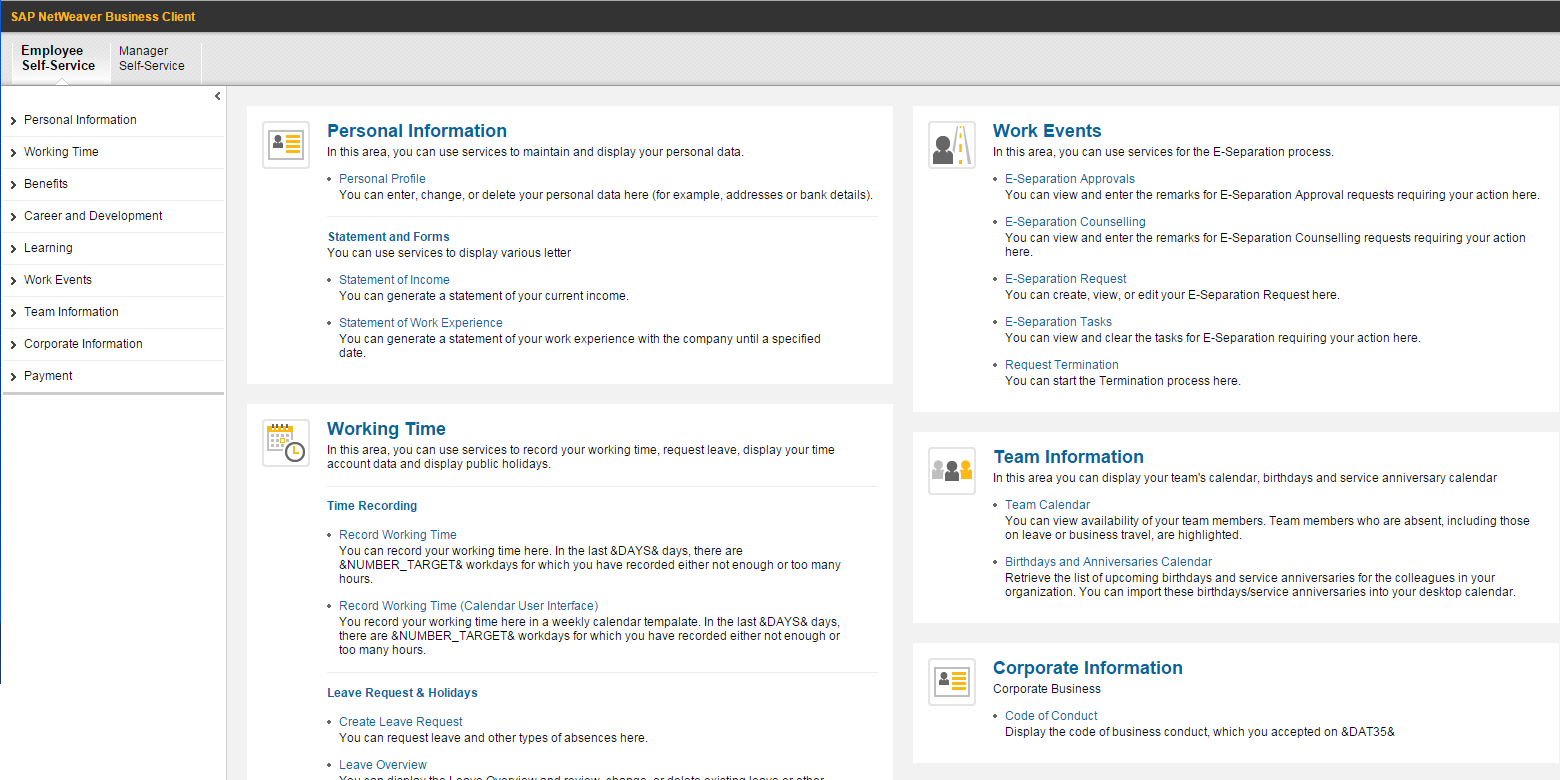 Next, I went to test some of the same services with the Portal but ran into multiple issues from logging in to getting access to ESS/MSS. Here are some of the issues that I saw:

First, I got a message saying no portal roles are assigned for my user. I reached out to the basis guy and he quickly resolved this one by assigning me a role (R3_ROLE_DS) which he linked to a custom role in SAP (So I could easily reassign it to others on my team). This role makes it so I could see the “Content Administration”, “User Administration”, & “System Administration” tabs.

Next, since I had access to the “User Administration” tab so I was able to assign myself the standard portal roles for both ESS & MSS directly in the portal. Once I did that I ran into errors once again. Here is the next error that I received.

Once I sent this over to basis we had a few more issues come across that I believe relate to some of the preliminary portal setup as well as needed configuration for Single Sign On. Ultimately, we were able to get them solved one by one until everything was straightened out.

After all of the immediate error’s were resolved, over the course of the next few months I still see some error’s in the portal that do not occur in NWBC. An example is the following error

This error occurs randomly when I am trying to do something in the “Content Administration” tab such as uploading a role from the back-end system. It occurs sporadically and via trial and error, research, and testing I have found it to be related to something with Chrome (At the time of writing this article I am using version 40.0.2214.94 m) and possibly the version that I am using, an extension I am using, or it could be something else along those lines. I do not get this error in IE or Firefox, although I do experience significant lag in Firefox. I have also found that IE lags and freezes for me if I am not using 100% zoom exactly for some odd reason. These issues with browser compatibility are just a few more examples of some of the complications that come along with the portal. Over the course of a couple of months as I worked through all the issues and started setting up different services and customization’s, I saw multiple other issues with the portal that I did not see with NWBC.

Clearly, the required skill set for the portal is significantly more than that of NWBC from a basis perspective. Luckily for me I was working with some excellent basis resources and they were able to troubleshoot and resolve these issues very quickly. Without the appropriate in house expertise I could imagine things going much differently with a lot of headache and issues. This is especially true considering that we did not have any customization and had a Pre-Configured system. After dealing with all of this, the portal was setup and ready to test SAP services. Here is the standard look of the Enterprise Portal when I logged in after all the issues were resolved.

During my testing, one of the first things that I noticed was that the standard ESS Portal role that I initially assigned to myself had the old Java WebDynpro version of all of the applications rather than the ABAP WD version. You can see the difference in these applications and obviously you would not want to use the outdated Java application at this time, but I just happened to assign that role to myself by mistake initially. 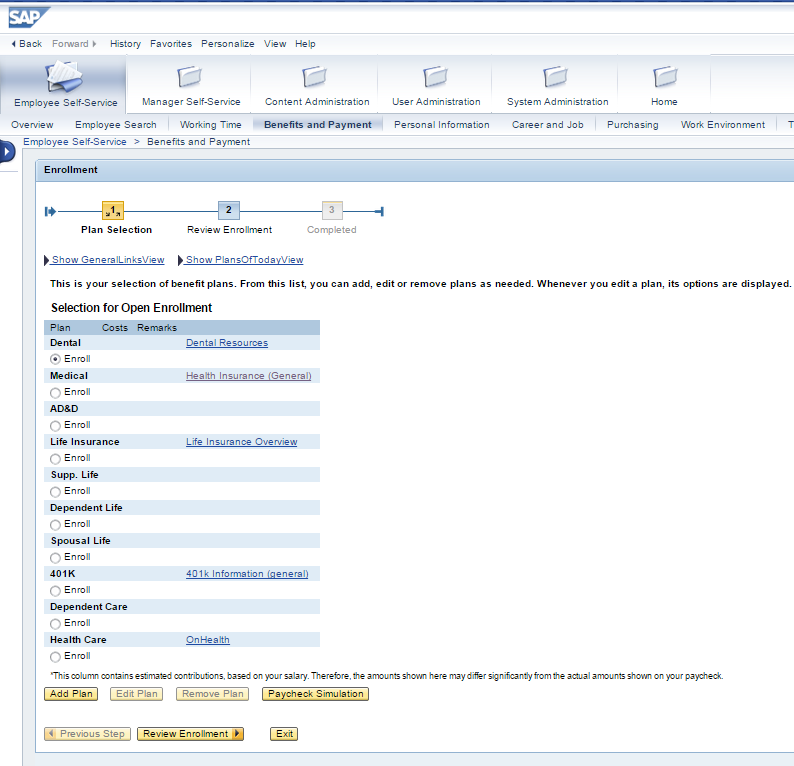 Obviously, this is not a big deal, nor a reason not to use the portal because you just need to assign the portal role to use the ABAP WebDynpro version of the program (Which I did afterwards) and it should work exactly the same as the NWBC counterpart as long as you set it up appropriately using LPD_CUST and the HRESS_AC_MENU floor plan manager setup. I did want to point all of this out in order to showcase the different technologies that the portal is capable of (which is a positive thing) as well as to show some of the history of the application’s (which is always cool to see) as far as look and feel. Here is a screenshot of the Portal role once I assigned the role that contained the ABAP WDA’s to myself. You can definitely see the improvement from the Java version with the icons, along with the additional sections for upcoming events, related links section, & most frequently used applications.

Ultimately there are some key differences that will determine which route is best for anyone comparing the two options. When it comes down to the final decision, you need to determine if NWBC is capable of filling your needs. Here is a good link that explains some of the capabilities of NWBC: The BIG List – (Almost) everything you can consume in NWBC. Some of the main decision points should be the following:

Here is a graphic that shows some of the differences and comparison points between the two.

In the end, every organization is different and has different requirements which will determine which technology is better for them but if you do not require extensive customization/different technologies then my recommendation is that NWBC is the way to go as long as you are on at least Enhancement Pack 6. This is especially true considering that the latest functionality released by SAP in the HR space (HR Renewal & Fiori) work well with NWBC and in many cases SAP has recommended it as well. Why add the extra complexity and additional infrastructure unless you really need all the flexibility that the portal provides?

Feel free to share thoughts and feedback in the comments below.

Thank you for this review Imran. looking for further topics