In the following sections I wanna give an overview about the usage of ConQAT as static code analysis tool from an enduser point of view. I wanna explain why I use an additional tool and what information I get from it.

Why an additional tool for static code analysis?

With the Code Inspector (SCI) and the ABAP Test Cockpit (ATC) SAP already provides powerful tools for the static code analysis. I am using these tools (especially SCI) already for years, but there are some usability and functionality gaps which can be closed using ConQAT. Examples for that gaps are:

ConQAT (Continuous Quality Assessment Toolkit) is a software quality analysis engine which can be freely configured cause of using the pipes and filters architecture. For a detailed description have a look to ConQAT – Wikipedia. Some key points I wanna take out are:

How is ConQAT used in our ABAP projects?

In our ABAP projects ConQAT is used in the following way:

ConQAT provides the following general information in the result output. In the following chapters I show just the graphical output of a demo analysis, but of course there is also a text output for the objects for which remarks exist.

With ConQAT it is possible to define an architecture specification. It describes which objects can be used by which other objects (e.g. so it can be defined, that the UI layer cannot directly use objects from the data access layer). The relationships can be defined from package level down to single object level. From an ABAP point of view this than be compared to the ABAP package interfaces. The following figure displays a specification which defines the relationships on package level. 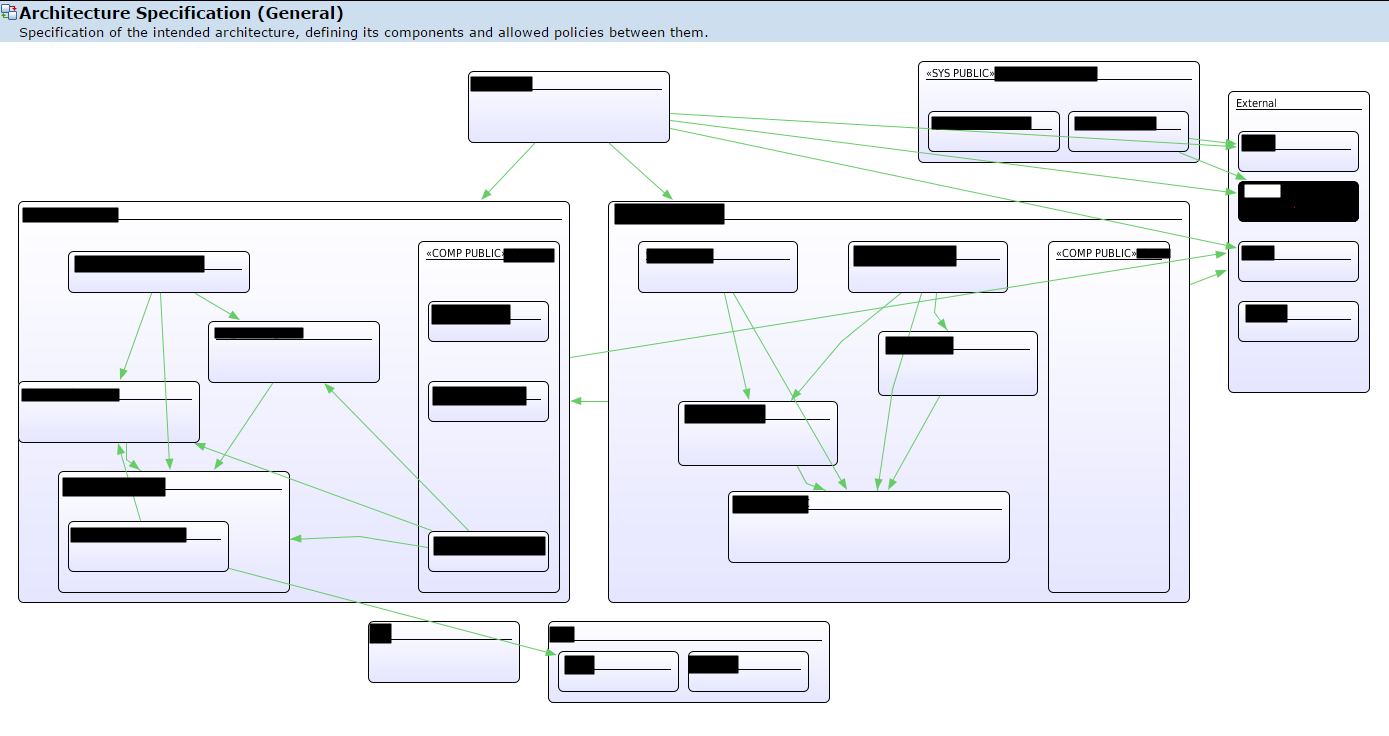 The Treemap Outline gives displays the analyzed ABAP packages. If the developer hovers with the mouse over a package he gets more information about e.g. the package size (lines of code). 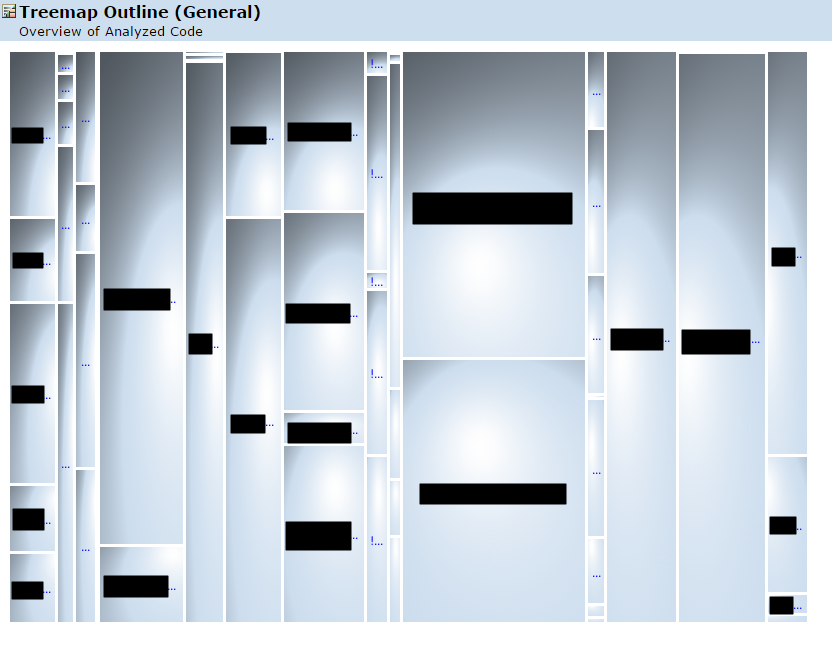 On the System Size Trend page it can be identifed how the system size grows over time. It is also visible how many lines of code are generated and how many are coded manually (generated objects can be marked in the configuration). 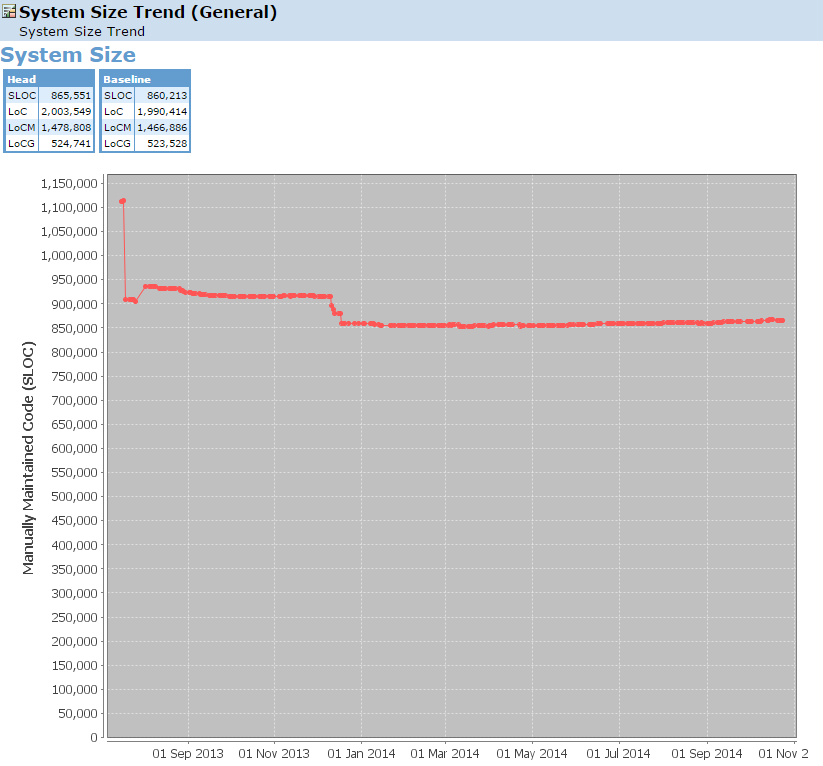 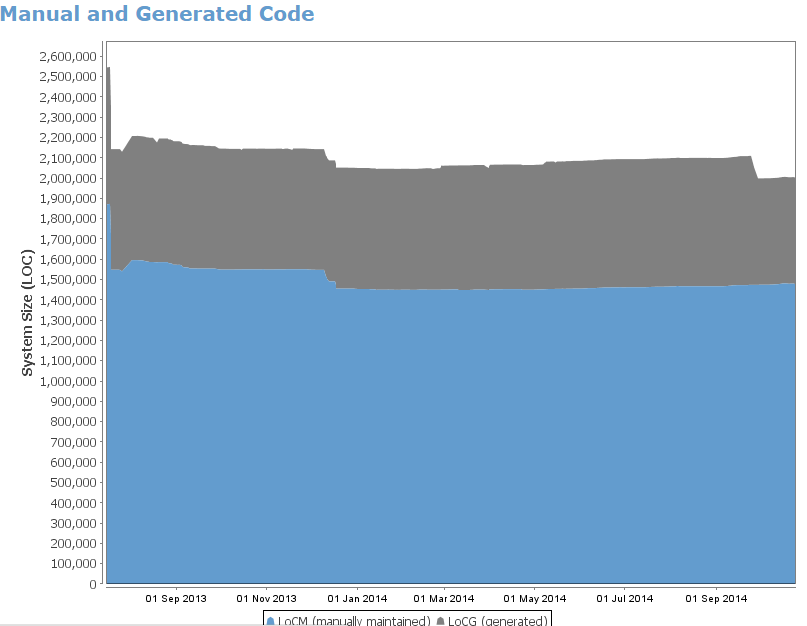 The modified source code is also visualized using treemaps. So in an easy way it can be found out where the changes were done in the system (added/changed/removed coding). Violations of the defined architecture (see section above) are displayed in the same graphical way as the architecture specification itself. In addition to the “green” arrows displaying the allowed relations, violations are displayed as “red” arrows.

ConQAT analyzes clones within the coding. This is not just a search for exactly the same code parts. The algorithm considers same code structures.

This check helps to detect coding which can be encapsulated in reusable functionalities and it helps also to detect “copy & paste” coding which will lead in most cases to error situations when in later versions not all places are adjusted (because of e.g. a defect, an enhancement). From a Clean Code Development perspective it helps to avoid violations of the “Don’t Repeat Yourself” (DRY) principle.

In case the information provided in the dashboard is not enough (even not on code level), ConQAT allows to compare clones with the help of an Eclipse plugin in detail. 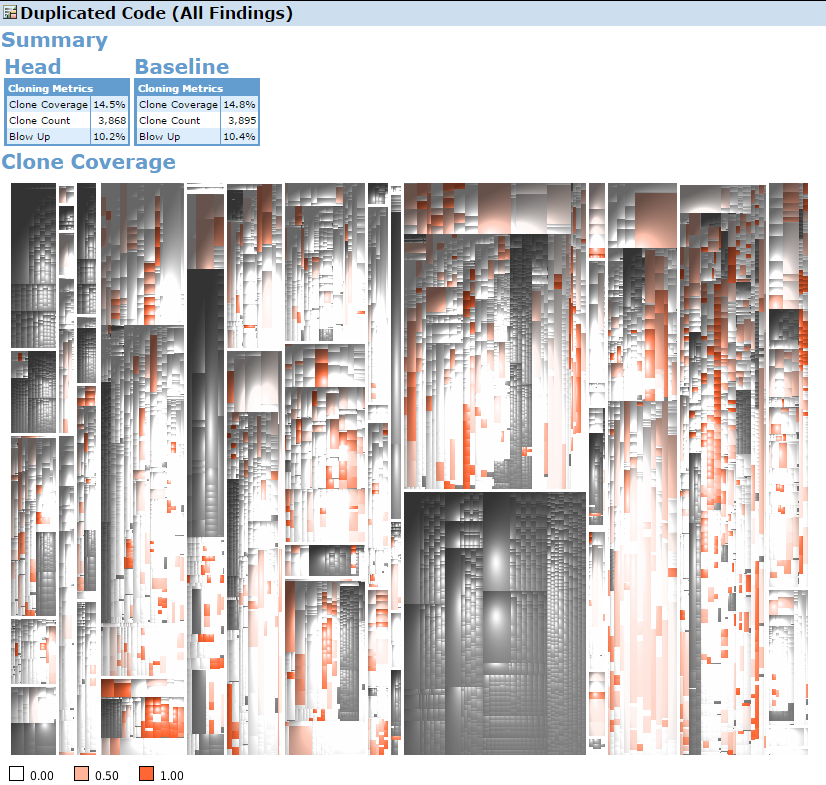 ConQAT allows to check for “long programs”; classes, programs, … which have more lines of code than defined in the configuration. To long classes for example are in most cases an evidence that the Single Responsibility principle is violated.

For “lines of code metrics” (like Long Programs and Long Procedures as described in next section) it can be configured if comment lines are considered or not (by default they are excluded). Empty lines are ignored in general. 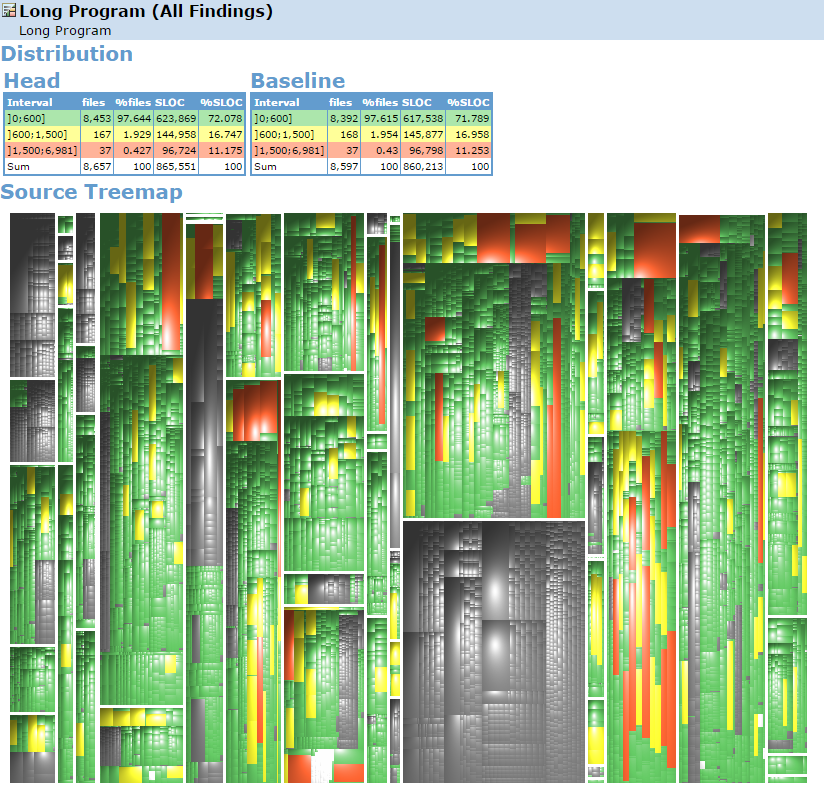 The long procedures metric checks methods, functions, … regarding their lines of code length. Violations for that metric gives us an evidence that to much is done in e.g. one method which has to be extracted in more granular reusable code blocks. The following configuration defines that up to 60 lines of code are ok, up to 150 lines the object has to be checked. All objects with more than 150 lines of code are not ok. 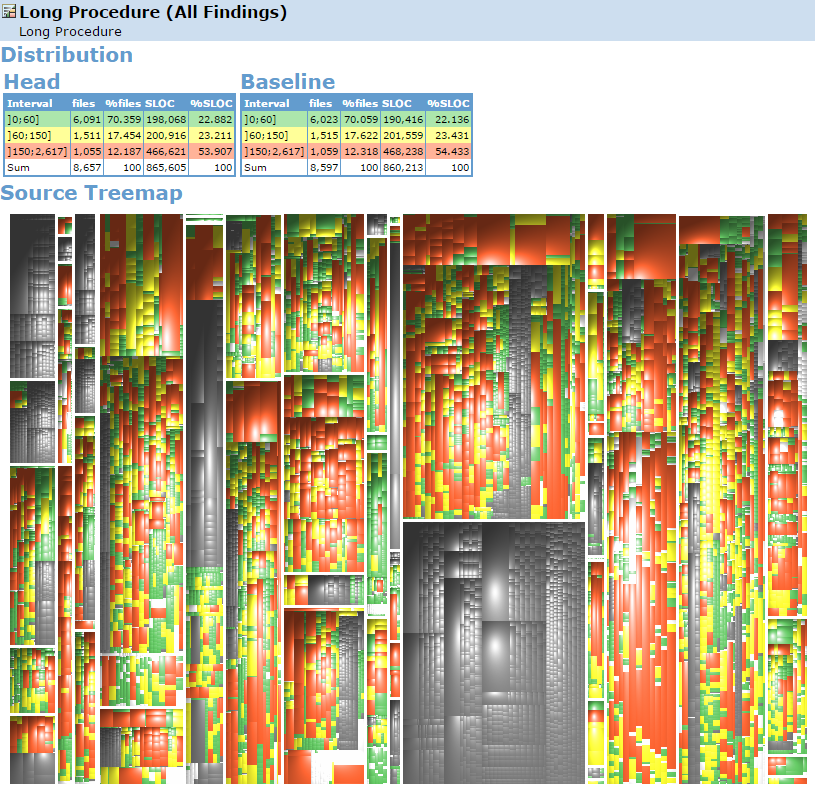 Deep nesting is a classical metric which is also checked by ConQAT. Coding is identified which will be to complex to read and to understand because of very deep nestings.

Our configuration allows up to 5 deep nesting levels (which is already a high number). Up to 7 it the coding has to be checked. More than 7 it is not allowed. 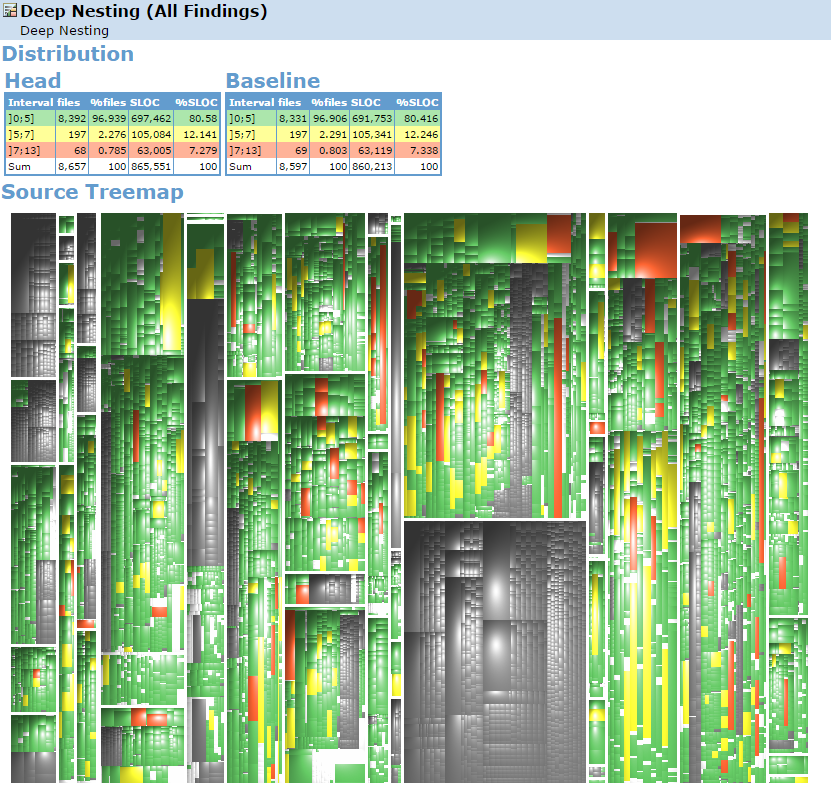 As mentioned before, ConQAT allows to integrate the results of SCI check runs. It can be defined which check results are marked as critical warnings or as guideline violations. The integration of the SCI results in the ConQAT Dashboard has the advantage, that not several different places have to be checked for remarks and that the results are also provided in a graphical way which gives a better overview. And of course I see directly what has been changed over time.

In the previous chapters I gave a general overview about the ConQAT features at a high level. The following features were partly already mentioned in these chapters, but I wanna make some further explanations to them to turn out these functionalities.

ConQAT supports code baselines. That means that you can define a code baseline for which no remarks should be reported in a delta comparsion.

Depending on your project following quality goals are possible:

ConQAT analyzes the complete coding, reports the remarks for the whole system, but returns also just the delta compared to the baseline (if configured).

In the HTML Dashboard the developer can navigate down to code level. On a single object level he sees all remarks for the object on the top. When he scrolls through the coding he sees the remarks also by a marker on the left side. So without entering the system, the problems can already be analyzed in detail. 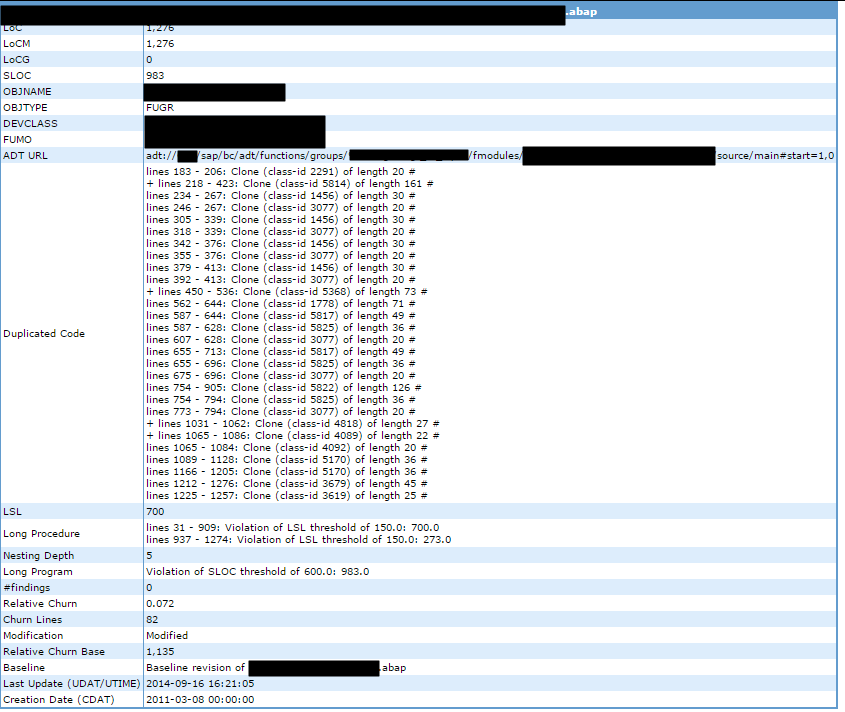 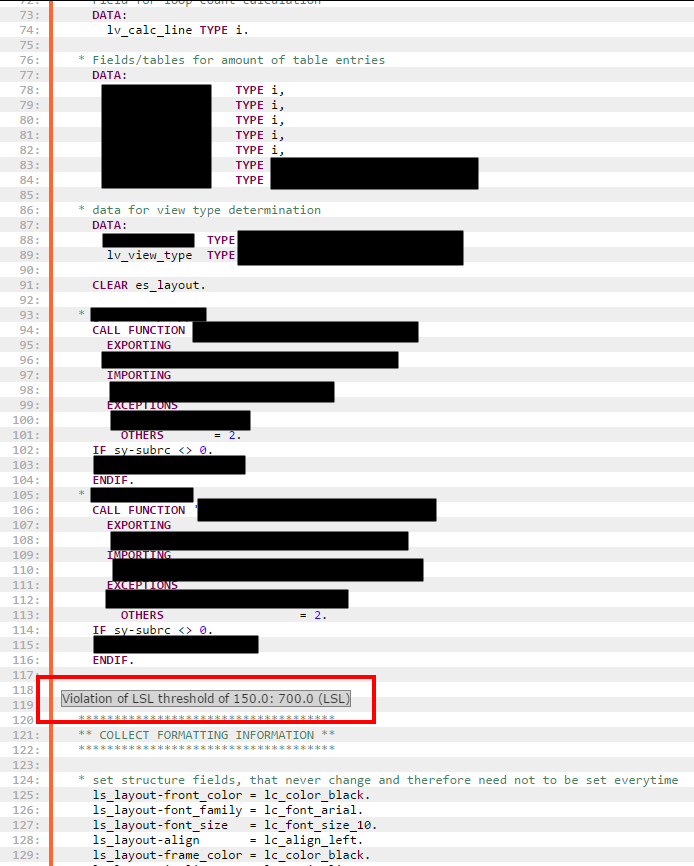 Integration with ABAP in Eclipse

With the ADT Tools so called ADT Links were introduced. Links which can open ABAP objects directly in Eclipse. This ADT Link feature is integrated in the dashboard. So a developer does not need to copy & paste the object name if he wants to edit it. He just has to click on the link to open the object directly in Eclipse ready for editing.

Not every remark of ConQAT must be a valid remark (cause of different reasons). For that ConQAT supports blacklisting of remarks, so that the remarks are ignored in the furtheranalysis runs.

As you have seen, ConQAT is a powerful tool for static code analysis which gives a better overview over the systems code quality. With the integration of the SCI results you have the option to define one single place where all check results can be found and analyzed. Due to the flexible architecture ConQAT allows also that further languages can be analyzed which are in focus in the SAP development context (e.g. SQLScript or JavaScript).

At the moment the only thing I do not really like is that the code analysis only runs twice a day due to our configuration.

Finally I can say, that the code quality has made a big step forward since I am using ConQAT.

Does that mean we will get less entries in "Coded Humor" ? 😉

How do you integrate ConQAT with ABAP? Maybe this looks like i want to be spoonfed 😐

the ABAP source code to be analyzed and the code inspector checks are "extracted" to the ConQAT engine which does the different metric checks (using an specific ABAP language configuration). In general the extracted data is nothing else than a Zip binary which is created on the ABAP application server. The results of the checks are then visualized in a HTML dashboard. In that dashboard you can explore the results and you can directly navigate to the code with remarks via the ADT links (for that of course ABAP in Eclipse has to be used).

ConQAT looks really nice and seems to offer great possibillities for quality analysis. But it is not clear to me how to set up this tool to run the tests against abap code. Is there a tutorial about this?

you can find some tutorials if you search on the web.

This post has finally made me go googling on installation and setup tips.

nice article. Can anyone here send me a working conqat configuration file set (cqb + cqr) ? Cause I don't get plugin working in eclipse for ABAP code. Neither examples included in demo package.

As next - has anyone managed to use results in jenkins or sonar for showing long term trends ?

thx. Unfortunately I cannot share our configs with you. I assume that they would also not be helpful for you, cause the configuration is specific to your project needs. In the meantime in addition we switched to the successor tool of ConQAT.

Meanwhile I managed to create a config which works (in good old text editor).

But what I miss is the basic view which shows two identical sections in my code. I only see a table summarizing the clones without any chance for further drilldown.