How to manage Unicode imports and exports in SAP Sourcing

In general multi-language support is very commonplace nowadays yet can pose some difficulty, depending on how the software has been setup and configured.

For SAP Sourcing this can happen if, for example, the import files are not properly prepared regarding file encoding.

Hence, after the setup that is performed by the System Administrator/Application Responsible, the end user solely has to pay attention to the typical import/export tasks he or she needs to perform.

Explanation and how to approach imports:

Once you`ve made sure that the DB supports Unicode (this should by default for a successful SAP Sourcing installation) you can continue to look at the application server. This seems like an area that`s somewhat overlooked as it`ll end up in a very different behaviour for the exact same workflow in the application.

It is important to note that that the Unicode “txt” might work if you are using the application server`s default encoding, but it will get confusing once you get to the trace. The preview and data will be correct, however, the trace might be confusing to users. Hence it is imperative to make sure that the application server is also set to use Unicode (UTF-8) encoding. From the start this will make it easier on the end user as they solely have to pay attention to the import file itself.

Explanation and how to approach exports:

If the data is already properly stored in Unicode in the database an export to e.g. an Excel file will be successful in its encoding.

To sum this up please have a look at the following table:

As a conclusion of this article it is highly recommended to make sure that the application server`s JVM is set to use UTF-8 encoding if you intend to use multiple languages.

On a NW AS this can be done  in the NW`s configtool by setting the Java JVM parameter “Dfile.encoding” with the value “UTF-8”.

If this is correctly set, the SAP Sourcing system will show in Setup – System Administration – System Information – Service Registration tab the “Character Set” which then would read UTF-8.

Let me know if you have any questions on this and/or also see my blog at: http://scn.sap.com/blogs/joerg.lippmann for more details on SAP Sourcing. 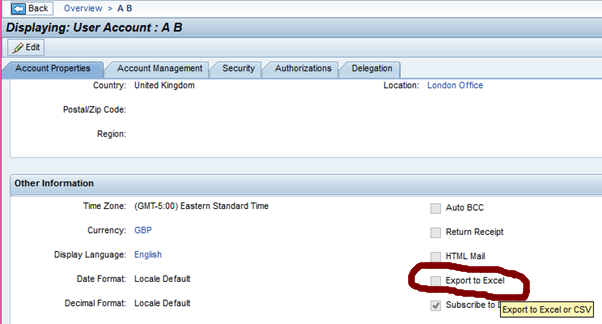