To foster entrepreneurship among young talents, SAP and the nonprofit Net Impact are holding innovation events around the globe. 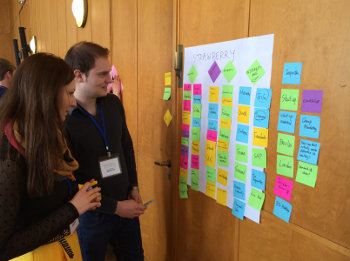 “To make an impact, you don’t have to start big, just start”, a young woman points out during the Mannheim Impactathon. SAP is partnering with Net Impact, a community of more than 60,000 students and young professionals worldwide who are committed to integrating social and environmental impact into the workforce. Aligned to the company’s goal of making the world run better and improve people’s lives, SAP is organizing local innovation events called Impactathons where young people can learn what it takes to convert entrepreneurial ideas into action.

At the seventh event in the series, about 60 students from nearly 15 universities gathered on February 5th at the University of Mannheim, Germany. Ten SAP employees were invited to join either as team members sharing their experiences or as Design Thinking coaches. Three experts from social start-ups perfected the chemistry.

How can SAP better support young people to pursue entrepreneurship that improves their lives and the rest of the world?

The challenge given to the participants was quite general: How can SAP better support young people to pursue entrepreneurship that improves their lives and the rest of the world? It’s not surprising that the agenda is as unorthodox as it is simple. Students and SAP employees are assigned to small groups where they have the chance to elaborate their ideas. The concept is based on a combination of Design Thinking and Rapid Prototyping. Brainstorming sessions take turns with a “marshmallow challenge” and “energizer breaks.” Finally, the teams pitch their most creative solutions to a panel of four judges consisting of the local Impactathon experts and Alexandra van der Ploeg from SAP Corporate Social Responsibility. 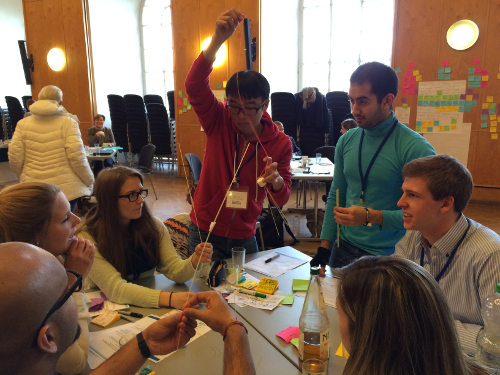 “For SAP”, Alexandra van der Ploeg says, “the benefit is to showcase its commitment to improve people’s lives both to our employees and to the next generation of talents such as university students.” SAP also brings local CSR partners to the table who act as experts, sharing their knowledge and input with the teams.

Entrepreneurship is a big word, not only in today’s business context. The next generation workforce, the so-called millennials, is striving for more than just a job. The ambition of making a positive impact on the world often applies to their private lives as well as to their job ambitions.

“We are glad to work with SAP because of its honest commitment to improve people’s lives.”

Stepping up for social causes, be it private or business, has of course another personal benefit. When asked what they took away from the day-long Impactathon, their response was singular: inspiration – both for the big picture and for their career paths. “We are glad to work with SAP because of its honest commitment to improve people’s lives,” affirms Lily Mathews, Partner Programs Manager, Net Impact.

At the end of the day, the jury in Mannheim was most impressed by the idea of building a computer game for kids to “play social engagement,” a form of gamification of a serious topic.

The Impactathon series started in 2014 and hits 12 cities around the globe. After Mannheim and Berlin in Germany, the final stops are Barcelona, Vancouver, Shanghai and Porto Alegre. The winning team among the 12 events will be invited to the annual conference of Net Impact in Seattle.