For those who just want to know if they can download, yes!  This is open source free stuff available today by downloading the SCN Design Studio SDK Development Community package (preview build at this time.)

I did a Part 1 on maps, which means I was obligated to at least do a Part 2, right?

To summarize, in Part 1, I talked about a Leaflet Maps approach with tile-based maps.  The (still quite buggy) SDK source I gave out took a marker-overlay approach to visualize data.  This came with its own Geocoding challenges that I tried to approach in a few different ways there.  I plan on revisiting this one day but there’s a lot of baggage with this component so I wanted to start over from scratch with the mapping attempt.

I continue to be a bigger and bigger fan of Mike Bostock and his D3 and Topojson examples.  Topojson works with DS to project map data onto an SVG or Canvas component (English: It draws vector maps.)  The format of this data is a latitude-longitude JSON format that is an extension of an already popular GeoJSON format.  The advantage of Topojson format is that it can reuse shared feature boundaries (United State’s northern border sharing the same as Canada’s, as an example) so the data size can be dramatically less than GeoJSON.  And fortunately, his Topojson code supports either format!

So what are vector maps good for?  They could probably serve as a pretty good foundation for a map for things like administrative boundaries, rivers, etc.  The map tiles I built in Part 1, were actually built from mostly these JSON vectors.  There’s a balance of how many vector layers you’d want to render in an SVG on the fly, so sometimes pre-rastering as tiles to make nice tile sets makes sense.  But I wanted to settle on just a feature layer that represents either countries or their state/region/provinces and then allow for a datasource’s view map to those features.  For example, if my dataset were this: I would want to take whatever dimension(s) is in the rows (State in this 2D depiction) and designate that as the geographic feature “key”.  The measures that follow obviously will be the data to visualize.

If you take a look at some of the Topojson examples you can see that Mike Bostock has some great (and many times mindblowingly exotic) visualizations.

Two ones I thought hard on were an Area Choropleth Map and a Bubble Map.  I decided to pick the first one as the second one probably could be borderline chartjunk but maybe I’ll go back and make this another option one day (or the Open Source Community can!)

So time for another picture: 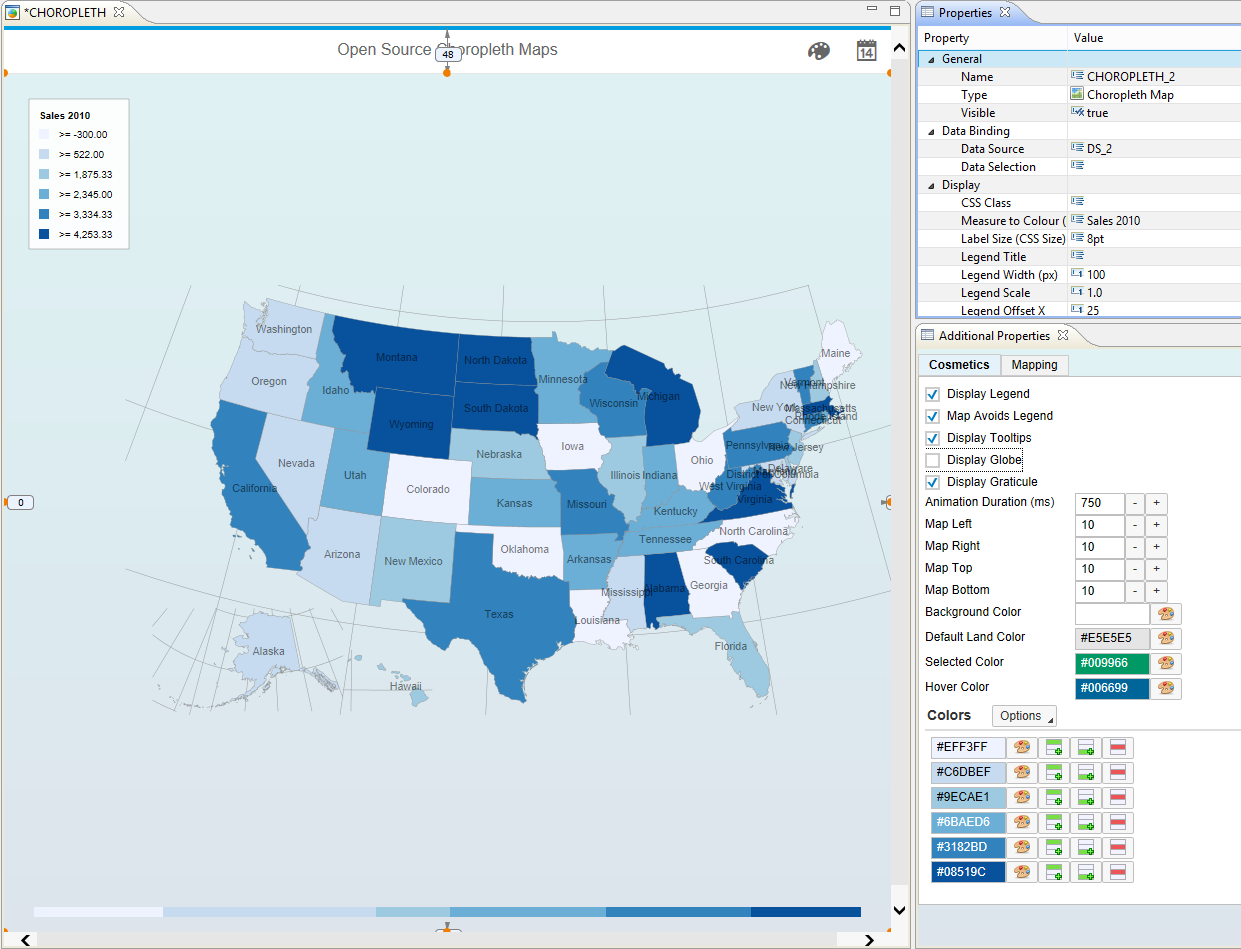 What we have here is a Choropleth map that is showing Sales 2010 Measure, with many properties on the right for reference.

First, some simple properties available in either the Default Properties panel or in Additional Properties Panel (illustrated above):

Now, some of the more interesting properties:

I’ve just kind of been working on this in the past week in the evening so that’s all for now!

If you are interested in this specific source code, it can be found here: https://github.com/org-scn-design-studio-community/sdkpackage/tree/master/src/org.scn.community.geovis/res/Choropleth

And finally a parting YouTube movie showing the above example at runtime using many of the properties and BIAL scripting:

As always, feedback/questions/comments/bug reports are welcomed! 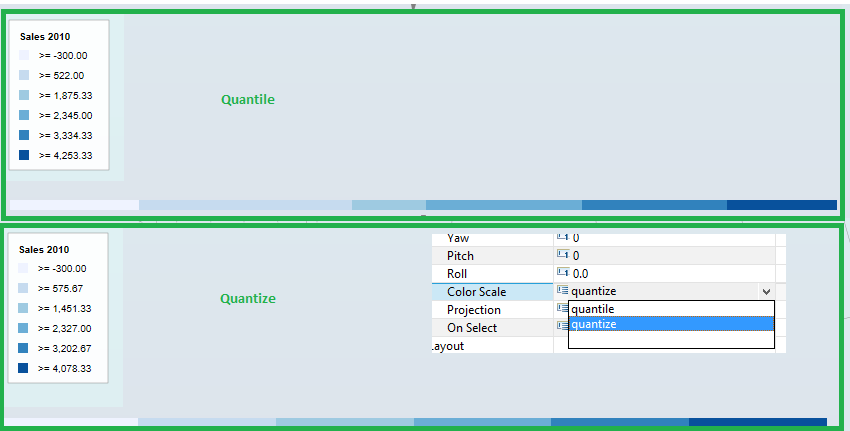 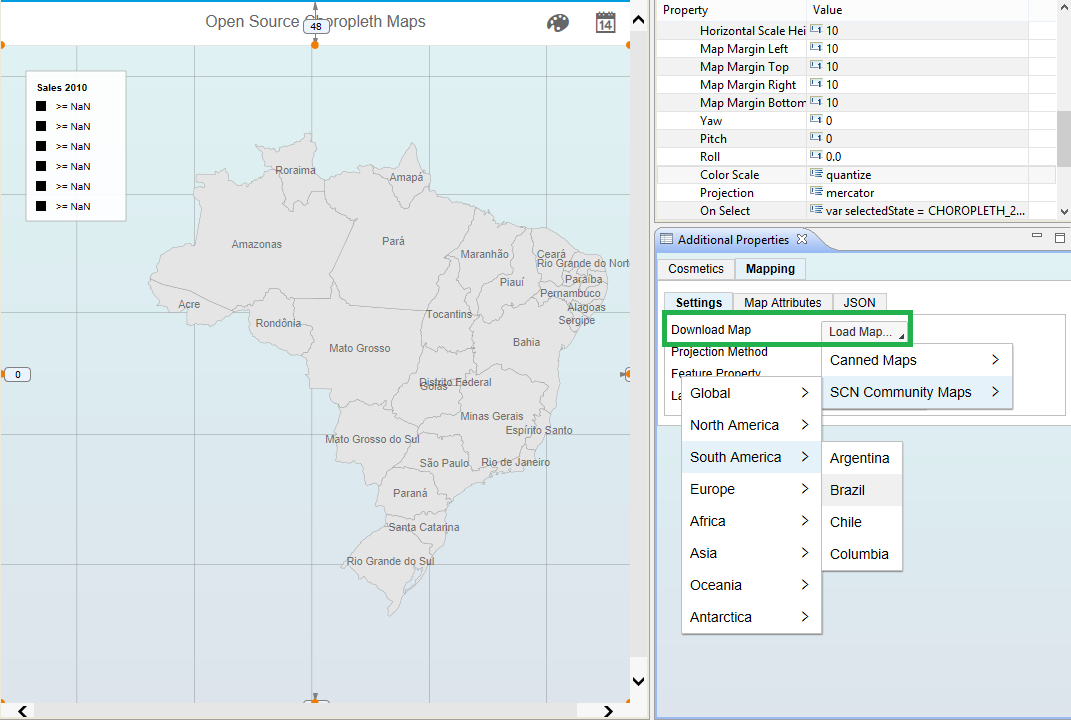 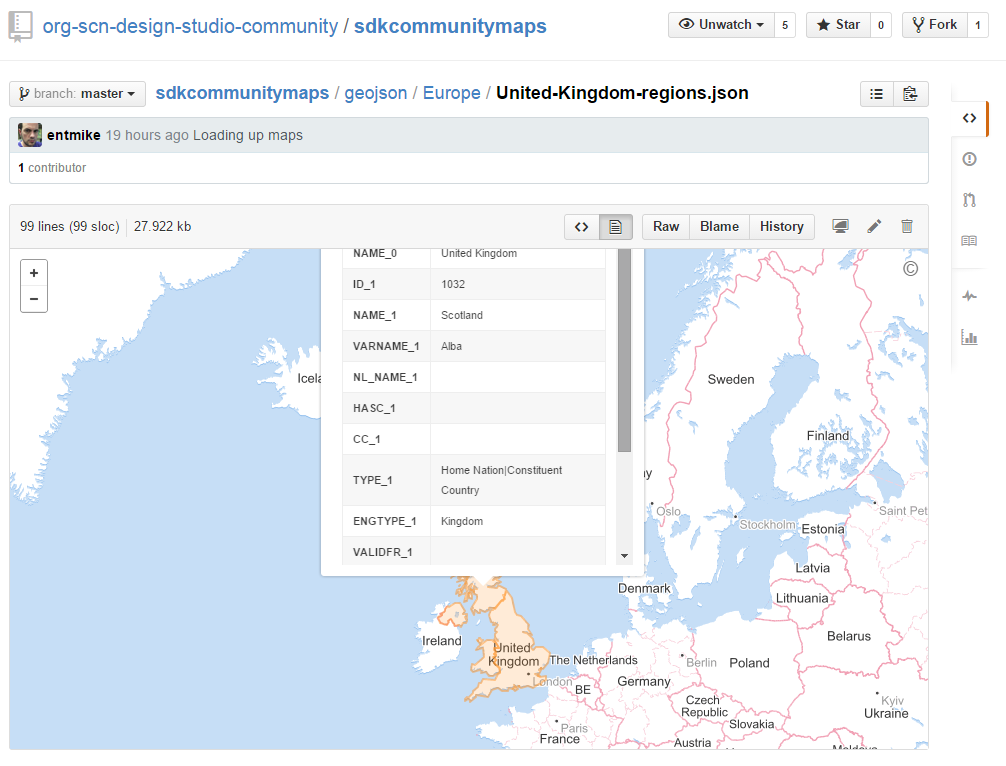 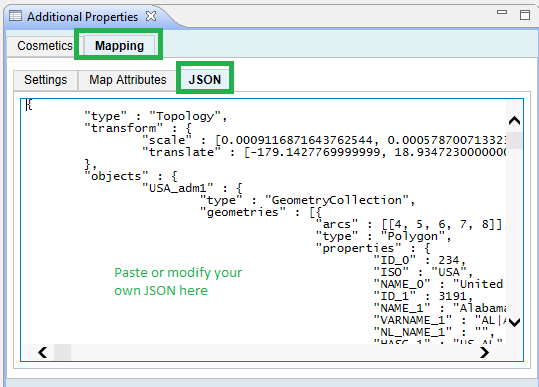 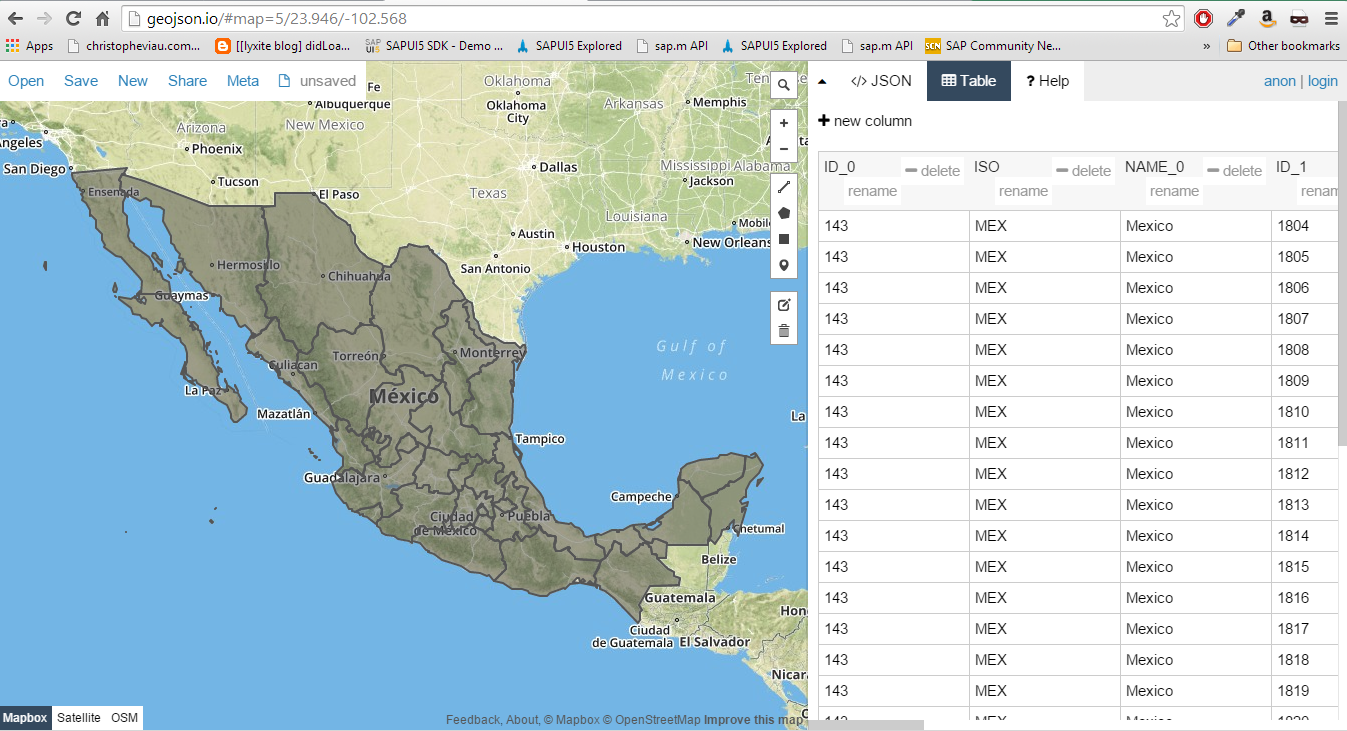 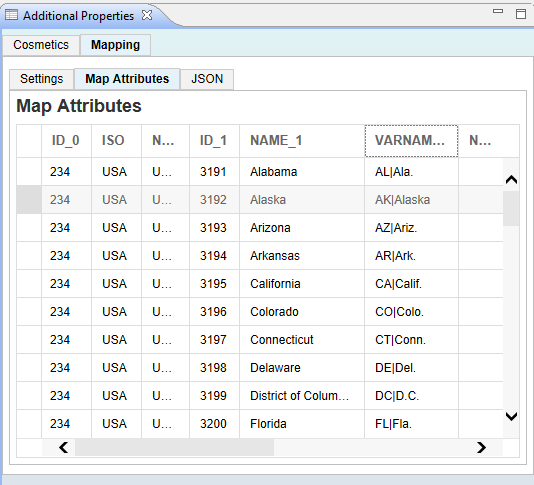 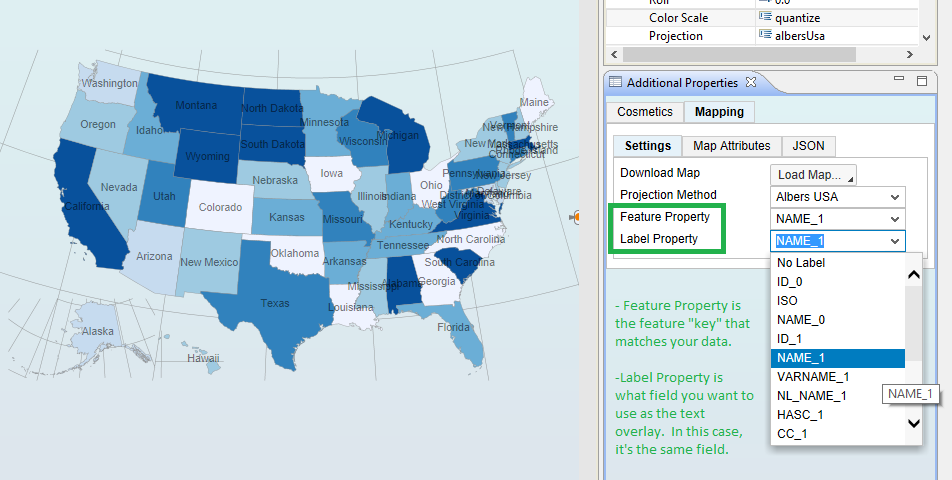 Really nice. I had no time to check the source but it looks like you used HighMaps ( + Highcharts looking at your video), nice choice. Fresh but promising.

The concept of directly type the geoJSON inside the properties is also a good idea because I find it's kinda hard to create a catalog a designer can custom with its own file.

This was not done with Highmaps. This was done from scratch with D3 and Topojson.

Another high quality contribution as usual, Mike.  In the YouTube video is the line chart a built-in feature of the map or are you toggling the visibility of a standard chart? 🙂

It is a regular DS chart just put there to illustrate use of On Select and illustrate how the component handles resize transitions.

Hello Michael, I'm using your work and need load a custom map file but don't know how do it, only can select a integrated map but I cant load my own map. Please can you tell me how ?

Under the JSON tab, just paste in the GeoJSON.  That's it!

nice work Mike. I will have a go with this

This is great Mike ... I didn't see any way to leverage lat/log coordinates if we're maintaining them. Did I miss anything or is this based on the geocoding headaches you explained in the previous post?

You sure did ... man, who can keep up with a 4 part series? Thanks for the quick response!

great blog!! The link to the source code does not work, however:

Can you please update it?

the correct link is

("geovis" is wrong, should be "databound")

I can use the google maps api?

Nope.  This doesn't use Map Tiles at all.

This one uses most other Map Tile providers, though:

There's a Leaflet plugin that's supposed to translate Google Map tiles over to this tile pattern but I've not implemented it because of Google license.

I also want to transition the projection method on the fly, as illustrated here:

How can I do that? Because regarding the projection method,  I just find this: 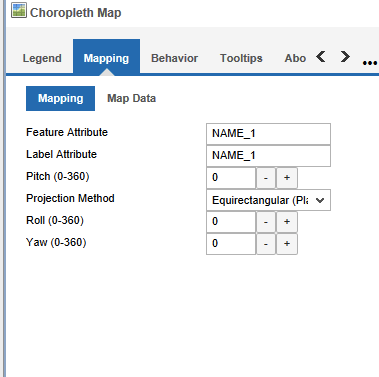 Thx for your help,

/edit: Solved it myself, via setProjection (JavaScript) 😉

I'm having trouble trying to dynamically switch the component to use another measure. I have a Datasource based off a universe, which has two measures - "Amount Sold" and "Quantity Sold". However when i try and execute the command 'CHOROPLETH1.setMeasure("Quantity Sold");' I'm getting an error!

Can you give the error message?

I have now managed to achieve what I was after by setting a measure filter on the data-source instead, however the error listed when I use the setmeasure function is:

On a similar note, what is the syntax for setting a pallete dynamically? Where can I find the required pallete name to include in the setColorPalette("") function?

What is the syntax you used for setMeasure() and setColorPallete(). thanks in advance