The Grammys Are Trending: A Look Back Over the Years 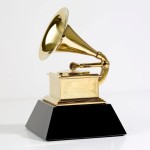 The 57th Annual Grammy Awards, honoring excellence in the music industry, will be held Sunday February 8, 2015 at the Staples Center in Los Angeles. The Grammys were originally called the Gramophone Awards which explains the gilded statues presented to the winners. According to legend, music executives created the Grammys in reaction to the rising popularity of rock ‘n’ roll; by awarding only ‘quality’ music they hoped to control the public’s taste. It obviously didn’t work.

While the first Grammy ceremony had only 28 categories, this year there will be 83 of them. Luckily most of the awards will be handed out before the live broadcast; otherwise it would last even longer than 3 hours.
At the first award ceremony in 1959, Henry Mancini won Album Of The Year for The Music From Peter Gunn. You may not be old enough to remember the television series named Peter Gunn, but you will likely recognize its music: listen. I’m less confident you’ll recognize the Record of The Year; that was Volare by Domenico Modugno.

The Grammys provide a simple way to search the thousands of awards over the last 57 years. After a little analysis and some additional research, I discovered some interesting factoids:

And probably the most bizarre occurrence at the Grammys happened in 1998 during Bob Dylan’s live performance when a man danced on stage with the words “Soy Bomb” painted on his bare chest. After being removed by security, he explained: “Soy represents dense nutritional life. Bomb is, obviously, an explosive destructive force. So, soy bomb is what I think art should be: dense, transformational, explosive life.”

I wonder if anything that weird will happen this year. Watch #GRAMMYS

This blog was originally posted on Manage By Walking Around on February 5, 2015.