Virinchy P is an SAP Mobility Consultant at Wise Men ERP Solutions, an SAP partner, and the SCN Member of the Month for February 2015. He is enthusiastic, and keen — and I think he is working at the right company because I found him to be wise beyond his years.

Can you tell us a bit about yourself, where you live, what you do at SAP, and other things you would like to share with the community (hobbies, fun facts)?
I am Virinchy Panangipalli (Virinchy means Lord Brahma – one of the Hindu Gods), born and raised in Visakhapatnam city (aka Vizag), Andhra Pradesh, INDIA. Vizag is a port city on the southeast coast of Bay of Bengal and has the only national harbor of India. This city of destiny, is blessed with natural beauty with hill ranges, pristine beaches along its coastline and lush, natural valleys. Vizag is also the first city in India to be developed as a Smart City by the Indian Government and Cisco Systems.

For work, I have been relocated to Hyderabad, INDIA. This cyber city is one of the Major IT Hubs in the southern part of India.  Also this Nijam dynasty was famous for Charminar (name originated from Urdu Chār and Minar, translating to “Four Towers”), Falaknuma Palace, Buddha statue and, of course, the beautiful pearl market.

Currently at Wise Men, I carry the responsibility to design and develop enterprise-grade mobile solutions for our customers. It initiates from gathering their requirements, understanding their business process, to designing and developing the solutions and delivering it, irrespective of  the backend. Customer satisfaction, security, user experience and cost factors are the highest priority. Prior to that I have worked with a startup company, mobvious, which was founded by a few Silicon Valley veterans and funded by an angel investor.

When did you become a member of SCN and which areas are you most active in?

It was during my engineering (2012 or 2013), that I have come across this term ‘SAP’ from one of my cousins Siddhartha Ampolu (in.linkedin.com/in/siddharthaampolu), and have googled a lot to understand what does it mean, which eventually redirected me to SCN. I have become an official member of the community almost 2 years ago, when I started my career at my current workplace. I am mostly active in the spaces of SAP Mobile, SMP Developer Center, SAP Gateway, SAP NetWeaver Gateway Developer Center and sometimes in SAPUI5 Developer Center. I am also slowly updating myself on SAP HANA Cloud Platform Developer Center and SAP HANA Developer Center.

What motivates you to share your expertise? And how do you find the time to contribute so actively on SCN?

SUP was still evolving at the time when I started my career in SAP, and there were only limited people working on the platform then. It was the community and the community members that helped me to learn and  strengthen my concepts and gain knowledge on the platform. Over the period I have realized that the time has come for me to give it back to the community and replied my first question in SAP Mobile Platform Developer center (http://scn.sap.com/thread/3442095).

And, I recollect a famous saying by Albert Einstein, “If you can’t explain it to a six year old, you don’t understand it yourself.” Also, for our customers to deliver the robust solutions, I need to keep myself updated with SCN blogs, docs, and discussions. It is just another barter system now, which has become a daily activity for me – to learn from the community and share with the community. In fact, nothing helps to deepen our knowledge as effectively as sharing it.

Your blog, What is Cordova and how does it work, was very well received by the community. What motivated you to write it? How did you feel when it got featured on the SCN home page? Do you have plans to write more blogs soon?

I am glad that it was very well received by the community and also featured on SCN Homepage. Prior to SMP 3.0 Kapsel based apps development, we used to develop hybrid apps on SUP 2.2 and SMP 2.3. And for Hybrid apps development with 2.2 or 2.3 we just need to model the MBO, design the screens, and deploy it in HWC of the users. There was some magical work happening behind the screens during this deployment process. The platform generates the webpage code for us and runs the web pages in the HWC of the users. And Cordova does this magic there to run the webpage and enables the web apps to access the native device features of phone like GPS, Camera, contacts and so on… This magic is to be understood to work on Kapsel based Hybrid apps development and this blog is the result of the same which explains its working and ease the development process with some tools as suggestions.

Yes, I am planning to write few more blogs, and have a drafted version of how to guide, which explains one of the demos showcased at TechEd berlin, Developing the UI5 / Fiori like apps via WEBIDE using HCP and deploying it to end users using Afaria.(Video Link of the Demo at Tech Ed Berlin – https://www.youtube.com/watch?v=UhPIo4u3afs )

Of course, the first recommended document would be the Rules of Engagement and getting started Guides. Later I would suggest they find the space they are interested in and navigate through the blogs, documents and discussions in the space (Sort by date created – Ascending) and Wiki documents. Perform a search in the space before posting any query and share your experience with others having any problem that you have come across during the practice in the system. Keep your ears open and try to participate and learn in as many events as possible, CodeJam, Virtual Code Jam,  SIT, Tech Ed, and so  on…

These were the lines said by one of the co-founders at my previous company. I don’t remember the exact words, but it happens to follow something like this, “The day you are done with your hunger and work without passion would be the last day in your career.” Taking the lines said by him, I have made my hunger to learn new things every day and work on the technologies that I am passionate about.

Though I haven’t interacted with most of them, I am a big follower of their blogs and the wonderful documents they share in SCN spaces. Also the way they resolve complex issues in the discussions is amazing and have inspired me over the period.

iPad for Tablets, Windows at workplace and Android for Phone.

Yes- @viru_48
I am also in Linkedin (https://www.linkedin.com/in/virinchy)

Every month, a member of the SAP Community Network is recognized for exemplary behavior: sharing knowledge with peers, being helpful and taking on additional tasks to support community engagement. See the list of previous SCN Member of The Month Hall of Fame. 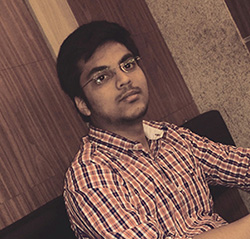 What an achievement at such a young age..

You have bright future Virinchy.. All the best.

Hearty congratulations virinchy. All your posts are really good and worth a while reading them. I really appreciate your time for the contribution to SCN.

Congrats veeru. you have nice feelings for culture.