The 2014 San Francisco 49ers season was groundbreaking, with the new stadium opening in Santa Clara, and the formation of a new partnership with SAP. As a Founding Partner, SAP has taken the 49ers fan experience to the next level with SAP analytics, mobile and real-time system capabilities, engaging fans like never before.

The SAP Silicon Valley team was thrilled to give employees the opportunity to experience the new high-tech stadium by introducing our 49ers Employee Recognition Program. This program acknowledged outstanding employees for their hard work and innovative ideas that have continued to help SAP Silicon Valley thrive. Others were rewarded for their 49ers pride and engagement in the community of SAP Silicon Valley. From sports pride photo contests and Halloween costume awards, to donating their time to volunteering, employees earned their ticket to enjoy a day away from the office, watching the 49ers play at Levi’s Stadium.

Some examples from the numerous employees who were recognized include:

The Winning Photo by Darren Huynh 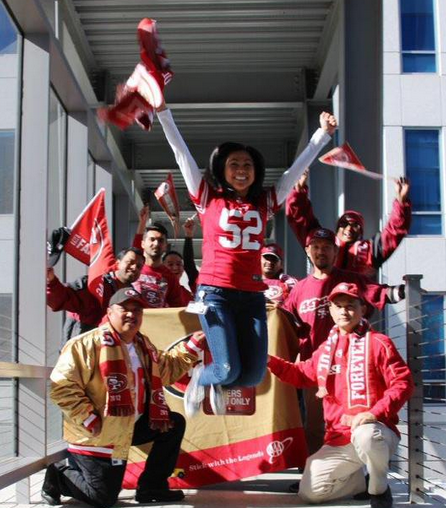 We look forward to running another year of the employee recognition initiative during the 2015 season. Keep your eyes out for ways to win your tickets, or continue to excel in the workplace, you could be recognized! Find more information about activities going on in the Silicon Valley on the Jam page, as well as Twitter @SAPsv.