The Consumerization of Internet of Things (IoT): Consider Yourself Warned

I remember back in 2008 when we ran a webinar entitled “Designing Mobile Applications in a Facebook World” as part of iAnywhere (the mobile arm of Sybase).  This topic was novel at the time, partly because mobile apps were still new in the enterprise space and partly because usability and design hadn’t become as commonplace.  What was soon coined the “consumerization of IT”, this idea quickly spread to every kind of enterprise software strategy campaign ad nauseam (can you believe the same people that use our enterprise software are also using Facebook, we better do something!). 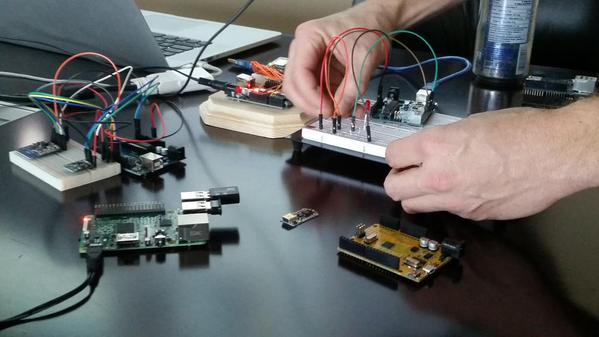 scenario near you and we as Enterprise software makers better wake up fast.  I woke up to this idea quite recently after watching my colleague’s presentation on his SimpleSimon invention:  a baby monitor that automatically sends him text messages when his baby starts crying.  He created it using an Arduino board (and while the hardware configuration is certainly cool enough to talk about on its own (see picture), I won’t spend that time here).  What sparked my interest was his use of EXISTING and FREE consumer software IFTTT to send the text message.

From their website, “IFTTT is a service that lets you create powerful connections with one simple statement: if this then that”.  What it is:  plug-and-play Internet of Things (IoT) software (although its users may not recognize this fact).  If IoT is all about intelligently connecting things through software, it would appear as if IFTTT is well on their way.  While you can create “recipes” through simple icon clicks that let you for example send a Thank-You tweet to a new Twitter subscriber, you can also do more complex things like send a text message when you are within 5 minutes from home, fade your light on to gently wake you up, or send a message from an Arduino board when it registers sound.  Even better, there’s an IFTTT community publishing “recipes” so you don’t have to reinvent the wheel every time.  I would have called them a developer community at one point in time but if anything IFTTT has taught me connecting things does not have to be a developer task.

So take heed IoT Enterprise software makers.  We need to develop simple and we need to develop elegantly.  Because similar to our Facebook World, our customers will not only expect but demand simple IoT plug-and-play software experiences they have grown to expect from their alter consumer ego.