Last Saturday Microsoft released the second major update of its Windows 10 Technical Preview for customer evaluation. Although this build won’t have all the eye-catching features demonstrated in the Windows 10 event last week, the new browser Spartan is not there for example, it’s still worth having a try. The size of 32-bit image file is about 3GB, while 64-bit image is more than 4GB, but it’s only a piece of cake to download in today’s network. To install Windows 10 Technical Preview on a new VMWare VM is also very easy and straight. The latest VMWare Workstation version 11 supports Windows 10 Tech Preview as a client OS, but I only have VMWare Workstation 9.0, so I chose Windows 8 instead, good luck! it worked and the installation went smoothly. It took me less than 30 minutes to complete all the installation and setup process.

I started exploring of the new Windows, clicking here and there, it’s very easy to get familiar with the new environment and get start to use. After a while, I just couldn’t wait to know how well PowerBuilder can run on this new OS.

Launch the PB12.6 GA installer, install PB.NET prerequisites then SQL Anywhere 16 and finally PowerBuilder. All ran smoothly, like doing on Windows 7. At the end of the installation, I chose not to restart Windows. Click the Start Menu, looking for entries for PowerBuilder IDE. It surprised me a little, you can see what I saw from the following screen shot. All executables installed by PB were arranged in a single level under the top level SAP folder, second and deeper levels are missing. This is worse than Windows 8, probably a limitation of Windows 10? 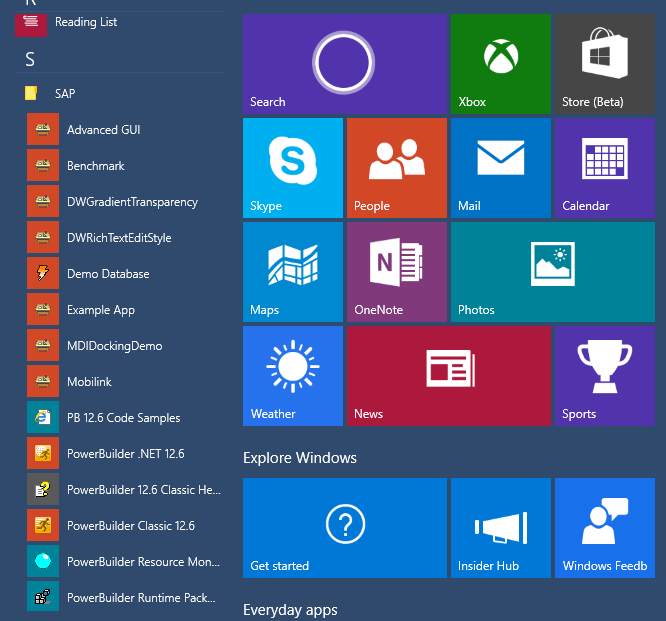 I clicked to run PB classic IDE, however it just hanged at the very first splash window, what a shock 😯 ! Realized that I didn’t restart after the installation, I did a reboot of the VM.  Ran PB classic IDE the second time, Alla… it’s OK now. Look at the caption bar of PB IDE in the below screen shot.

Then, ran the PB Examples application shipped with PowerBuilder, I executed a lot examples there, all worked perfectly. Here’s a screen shot of graph drill-down example. To summarize, my first play with PowerBuilder 12.6 on the latest Windows 10 Technical Preview is very encouraging, I even think the performance is better than on Windows 7, especially for PB.NET IDE.  Though Windows 10 is still in the early stage today, I believe, running PowerBuilder on Windows 10 final release will be straight forward. 🙂

So Cool and So easy with PB

PowerBuilder can be installed on Windows 10, is that right?

Because I don't see any information about this (Installation on Win 10) on release notes from Market Place?

The PowerBuilder IDE is a 32bit app but it can run on 64bit versions of Windows with no problems.

So, according to your response, this is for both ofinstallation and runtime, is that correct? I hope I don't misunderstand.

Correct. I have not had any problems with PowerBuilder on Windows 10.

According to MS site they are not supported, why doesn't this surprise me. Otherwise no problems using PowerBuilder version 10.5 on Windoze version 10. I had a licensed copy of 11.5 from being usergroup member but the license stopped working, so many things have really turned me from PB development the last year, could have sold some copies at work too, couldn't even find a seller at that time.  I digress...

I suppose that getting online versions of the PB help for prior versions is out of the question for SAP, right?  Sybase promptly took them down along with EBF's for many versions of PB making it again harder for a developer to recommend this tool without risk. end-rant.

PB is not currently certified on Windows 10, and I have heard from quite a few customers various things don't work properly.

As far as the PB help files, I'm running PB 12.5 on Windows 10 and the .CHM help appears to work fine C:\Users\Public\Documents\Sybase\PowerBuilder 12.5\Help\pbman125.chm

In case you are not aware, Appeon plans to release a new version of PowerBuilder that will support Windows 10.  This new version will be sold by Appeon not SAP - so no more of that nonesense you experienced.  Also, we plan to revise the pricing to make PB more affordable.

PB 12.5x help files work fine in windows 10.   Using these help files in windows 10 may be your best option for old versions of PB since Microsoft doesn't care about actual compatibility for their old help standard.  There are some reports on microsoft's site of people getting the old winhelp program from XP or windows 7 working on windows 10.  You could also just run a virtual machine with windows 7 or 8 for older versions of PB.

It does suck that SAP/Sybase never took the little time required to change help formats until the 12.x releases, but it is what it is.   Once SAP is out of the picture and appeon is in charge, things should quickly get much much better.

There is a way to use old HLP help files on Windows 10. Download and install the tool from here:

Thank you Roland. 🙂   I'm hopeful this will work and will report back either way.

At first glance, it did not work, but with some tweaking OLD windows .hlp files are working in PowerBuilder 10.5 on Windows 10.0.xxxx.

When I tried installing the file via batch file received a message that indicated it wasn't supported. I decided to try editing the .CMD file to bypass the version check and basically 'slam' the fix in whether it liked it or not. This worked!

Inappropriate Windows version. Setup must be run under one of the following

I was willing to "force" the install to continue (on my personal desktop) and see what happened, and at a glance this appears to have worked. The first time I clicked on help in PB I had to manually search for the PB help file but after that viola it opened! Thank you for the lead Roland.

Here is what I added to the CMD file after line:

I tried creating a new if-statement for Win 10 but couldn't get it to work so just bypassed the version check entirely without much optimism it would work, glad I did. You'll see a bunch of messages, mostly successful except one that was ok to be a fail. Then it will ask you to press any key to end.

Old PB Help files are working on Windows 10.0.xxxx - though I haven't had time to determine if there are any adverse reactions based on what I did - will report back if any are noticed.

Apparently Microsoft discontinued WinHlp for security reasons since Windows Vista although they still offered an installer for each version of Windows... up till version 8.1. There is not yet a version for Windows 10 and maybe it'll never be, I guess for the same reason I mentioned above.

But you can use a special utility that extracts the program from any installer so you can use it as before. After extracting the program you just have to copy it along with its related files to a Program Files folder and then manually associate .hlp files to it.

Here's the link although be aware that it is an exe you'll have to run to extract the WinHlp program: How to Open .HLP WinHelp Files in Windows 10

Now, about the new help program and the old help program... I personally like better the old one because after you select a topic from the Content tab or the Index tab in the Help Topics window the window closes and doesn't use any topic viewing space like in the new one where the topic index is fixed on the left side of the window. You could also quickly click on the Examples button to look at examples about the topic or the See Also button to see related topics. In the new one you have to scroll to the bottom to see these links.

And regarding the PB12 help file I find it difficult to use because sometimes when you click on a topic a popup window opens which allows you to select one of several choices for the same topic but they are shown with the same title and the same description although they get you to different places: 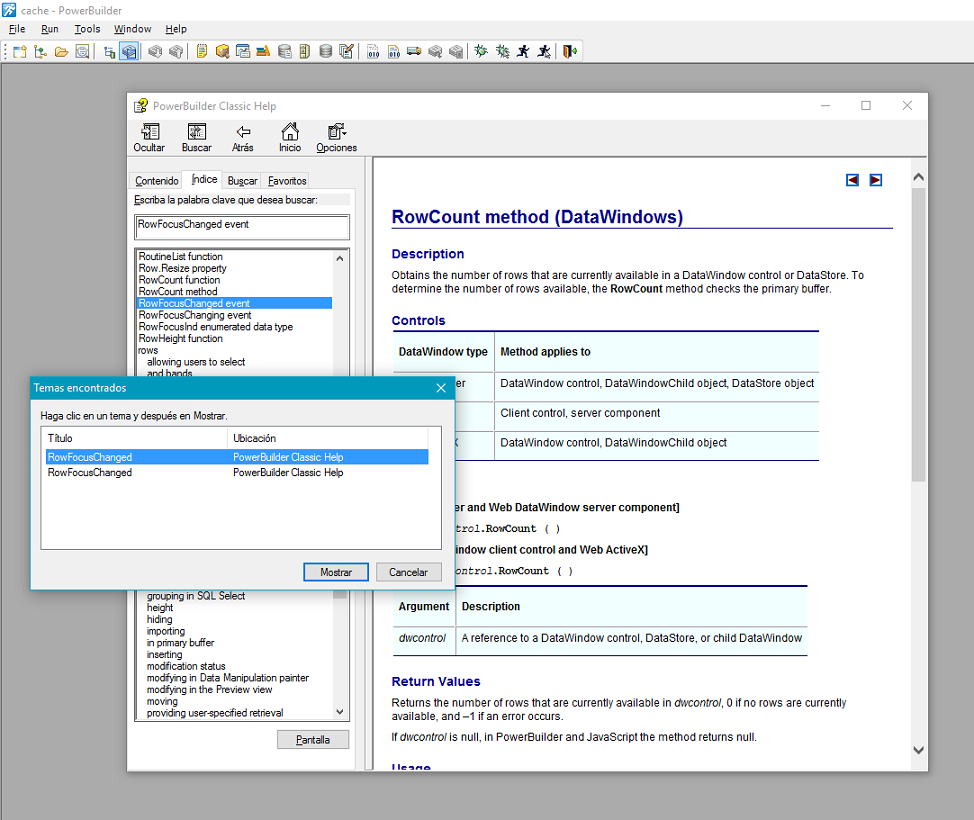 I hope this gets fixed in the new version of PowerBuilder...

After an update to W10 the Help function of PB is still opening properly.

Is there a certification saying that PB 12.5 is compatible with Windows 10?